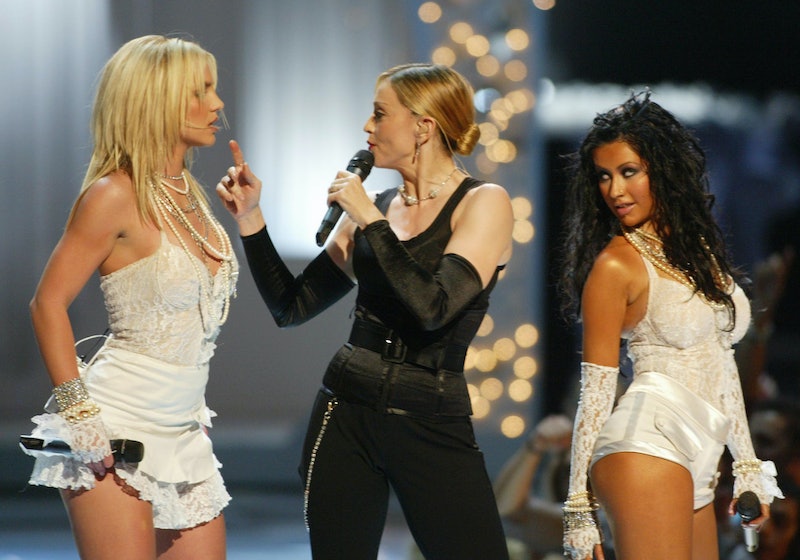 The year: 2003. The location: Radio City Music Hall. The event: The MTV Video Music Awards. The moment: In the middle of one of the award show's performances, Madonna popped out of a giant wedding cake, strutted down a flight of stairs, and swapped spit (ew, I’m sorry) with Britney Spears and Christina Aguilera. But that would not be the last smooch the Queen of Pop doled out that evening. In a recent interview with Billboard, Spears’s manager Larry Rudolph said Madonna kissed him in an elevator directly following the now-legendary VMA performance. Upon exiting the stage after the "Like A Virgin"/"Hollywood"/"Work It" medley, Madonna confronted Rudolph in one of the elevators at Radio City:

She put her arms around my waist and she gave me a big kiss on the lips and she said, “You see, Larry? It was all worth it.”

What was all worth it, exactly? The preparation that went into the performance. According to Rudolph, Madge was "very, very, very rigid about the rehearsals." That kiss was a WE NAILED IT kiss. A victory kiss. The kiss equivalent of a high-five.

Ugh, I love this story.

A totally fabricated account of the Madonna/Larry Rudolph kiss, from the P.O.V. of the elevator

The 2003 VMAs? Yeah, I remember. Man, it was such a long day. The VMAs are fun, sure, but they are exhausting. Anyone who tells you otherwise is full of sun-baked garbage. There are so many important people with important places to be. Their stress becomes your stress. And to make stressful matters even more stressful, the other elevator was slacking off. Lots of delayed responses to lift requests. I had no choice but to pick up my coworker's slack. I slept like an angel that night.

I’d lost count of how many trips up and down I’d made that day. All of the famous faces who’d asked me for a lift began to blend together.

All but two, that is.

After I heard a raucous reaction from the audience (I would later find out that the especially loud cheering happened after Madonna kissed Britney Spears and Christina Aguilera), Larry Rudolph and another passenger requested a lift. Just as the other passenger punched the CLOSE DOORS button, a perfectly manicured hand grabbed one of the doors. This stopped me from taking off. I was annoyed until I realized who it was: HER MADGESTY.

I've seen a lot in my line of work, but nothing could’ve prepared me for what happened next: Madonna boarded the lift, grabbed Mr. Rudolph, and kissed him. I tried to stay calm, but it was no use. I shook a few times. Fortunately, the passengers didn't seem to notice.

I didn’t know if this kiss was something I was supposed to witness, so I pretended to be preoccupied with carrying the trio of passengers to their destination.

So, I tried to act like I wasn’t there for the rest of the ride. Madonna, Mr. Rudolph, and the third passenger exited on the same floor.

“I can’t believe you missed the Madonna kiss,” one woman said. I began to to panic. How did they know about what happened in the elevator? I didn’t tell anyone! This is going to fall back on me! I'm going to get fired for something I didn't say!

“I’m so bummed. Wait, she kissed Britney and Christina?” the second woman asked.

“Yes. You should’ve heard the crowd. You would’ve thought everyone found bags of precious jewels underneath their seats at the same time. People went wild.”

That’s when I began to piece it together. Madonna kissed Britney and Christina. Mr. Rudolph is Britney’s manager. Madonna was talking about the performance! That kiss I saw was a friendly, post-performance kiss! A kiss for the on stage kisses! Nothing scandalous!

About a decade later, I saw video of the performance for the very first time. A passenger was watching it on her cellular device. I threw professionalism out the window and watched the entire video over the passenger's shoulder. I'd waited too long to not watch.

And that's when I realized that nothing could top seeing the video after all of these years. My time with RCMH had reached its pinnacle. It would only go down from there. (Pun intended.)

I quit working at RCMH the following morning.

I found a lake house that needed an elevator. So, that's where I spend my days. It's the easiest job ever. It's the closest thing to retirement an elevator can achieve without actually retiring.

Every night, I watch the sunset. And as I look out at the serene lake, I think about the '03 VMAs.

More like this
Everything To Know About Taylor Swift’s 10th Studio Album, 'Midnights'
By Grace Wehniainen and Jake Viswanath
Ed Sheeran’s Surprise Gig Included An Iconic Britney Spears Tribute
By Bustle Editors and Darshita Goyal
Kanye West Apologizes To Kim K "For Any Stress I Have Caused" In Rare Interview
By Jake Viswanath
Adam Levine Denies Having An Affair — But Admits He “Crossed The Line”
By Jake Viswanath and Radhika Menon
Get Even More From Bustle — Sign Up For The Newsletter