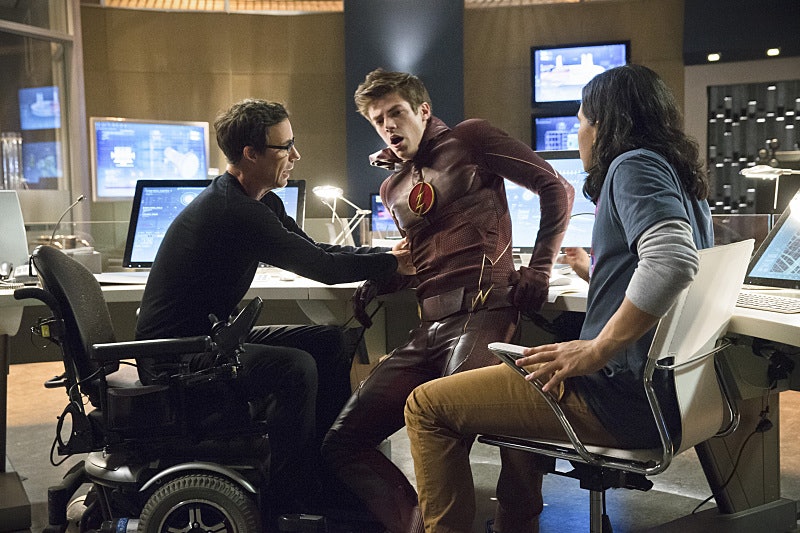 Metahumans are coming out of the woodwork in Central City and unlike Barry Allen, they're definitely not all there for pleasant purposes. First we were introduced to Clyde Mardon, who was basically the male equivalent of Storm from X-Men, a comic book from the company that must not be mentioned when discussing DC comics. Clyde Mardon is actually from the DC comics himself, in which he was Weather Wizard, an enemy of the Flash. Barry will encounter new villain Kyle Nimbus, aka The Mist, on Tuesday night's episode of The Flash , "Things You Can't Outrun." And yes, he is also a baddie from the comics, though not necessarily an enemy of The Flash or Barry specifically. Actually, The Mist was one of the archenemies of the superhero Starman and he has a pretty interesting history.

Kyle, whose last name was always written as Nimbus, was a Captain in the Canadian Army during World War I. He was a great leader and even won the prestigious Victoria Cross for services to his country. However, the man was also a highly intelligent scientist and after discovering how to turn his body into a gaseous state, he became a super villain. When his crime plot in 1941 was thwarted by Starman, he swore his revenge for years. Get your first look at The Flash's version of the Mist below.

Now, back to the comics. Decades after Starman stopped the Mist, Nimbus sent his two sons Kyle Jr. and Nash after Starman to kidnap him and kill one of Starman's sons. In exchange for his father, Starman's other son fought Kyle Jr., which resulted in Kyle Jr.'s death. This tragedy caused the Mist to go crazy for years, until he found a way to restore his sanity and take revenge again. This eventually resulted in his death and Starman's as well.

Now it doesn't seem likely that we'll see the Mist's arch-nemesis for the time being on The Flash, as it might be too early to start introducing a bunch of new superheroes when we have barely gotten to know the Flash himself. But perhaps this version of the Mist will be younger and just be starting out in his villainous state. Maybe the Flash will stop his first evil plan and then Nimbus goes to Opal City (his eventual home) to try a new tactic. And that's where he meets Starman.

What we do know about this version of the Mist is that his gaseous state is toxic and must be affecting both humans and metahumans. So Barry may not be immune just because he has special abilities. That makes taking The Mist down a bit tougher than anyone might imagine. What exactly the Mist is planning to do in Central City we don't know. But we do know that just like the goals of the other non-Barry metahumans we've met so far, it can't be good.