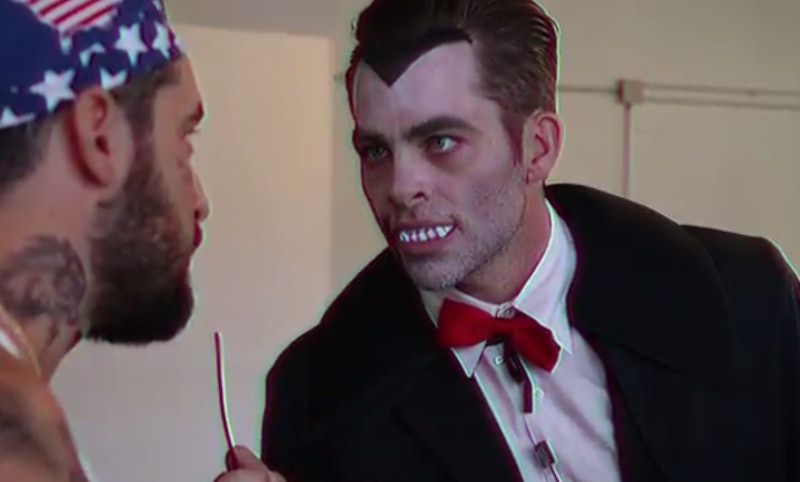 Recently we had pint-sized actresses Kate Mara and Ellen Page playing "Tiny Detectives." Now we've got the very seasonably appropriate "Vampire Lawyer," starring Chris Pine as, well, a vampire lawyer. It's a stirring, confronting look at vampire rights in — oh who am I kidding, it's a silly look at what might happen if Pine took on a very rickety production that starred him as a lawyer who's also a vampire.

There's a lot to like about this Funny Or Die video: Pine's makeup, the fact that they structured it like the last few minutes of a movie and the special features rolling over the credits, the presence of a lot of puns. Jimmy Carter's also there, which is...interesting. My favorite part, though, comes in the form of a Mumford-style track for the Vampire Lawyer soundtrack. Every soundtrack needs a little Mumford-y energy there, just in case anyone in the audience took the whimsy quotient for granted.

As far as Funny Or Die celebrity videos go, this one's not as cut-and-dry as some from the past have been: It's not a straight-up trailer or a straight-up scene, it's more like the mish-mash of extra features directors sometimes have at the end of a production and just want to get out there as much as possible. Then again, that's kind of what Vampire Lawyer feels like as a film in general.