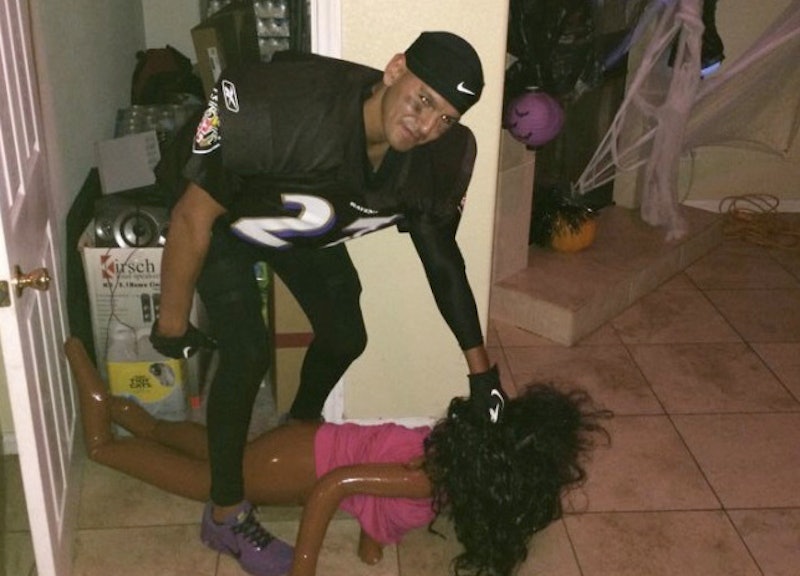 There's misogyny, and then there's this guy. One Reddit user's friend thought it would be hilarious to dress up for Halloween as Domestic Violence Ray Rice, complete with a female blow-up doll dragged by the hair. Because you know, a man beating his girlfriend to the point of unconsciousness in an elevator and having to drag her limp body out is the height of comedy. And domestic violence isn't even the funniest part – How about a woman as a faceless rubber object whose orifices exist solely for the pleasure of her man. Oh, and black face. Yep, this costume is a SCREAM, you goddamn genius.

Sarcasm aside, I'm livid about this costume and you should be too. There's actual steam coming out of my ears. Halloween does not erase "being a good human being". It's not an excuse to walk around as a giant, offensive commercial for domestic violence and racism. I don't know which part of this is worse: the Reddit user's captions [sic] "Ladies were falling for my friends Ray Rice costume" (HEY, ASSHOLE YOU FORGOT THE POSSESSIVE APOSTROPHE. Nothing you do is okay. Nothing.) and "This costume was a real hit at the party" or the fact that the dude wearing the costume looks so pleased with himself.

Does this guy not understand what's wrong with these pictures? My bet, based on his cat that got the cream smile, his sinister poses in the photos and his idiot mate's Reddit post, is that he definitely does get that what he's doing is terrible, and he's definitely not sorry about it. While it would be nice to be able to say I'd love to punch this guy in the nose, that would be counter-productive and reductive to my point about this costume being horribly offensive. So instead, I posit to you that I would very much enjoy vomiting directly into this man's mouth, which seems like a gross punishment befitting the grossness of his indiscretion.