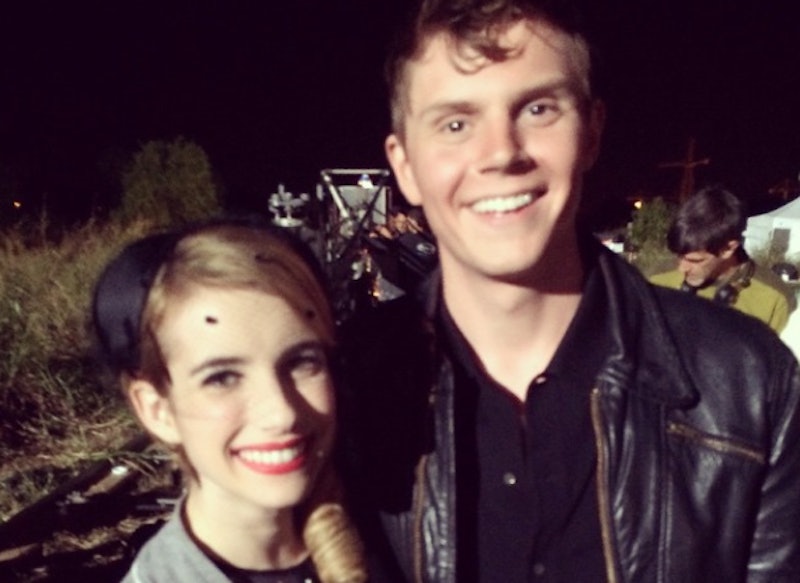 It's a not so happy Halloween at the freak show this week with the arrival of Edward Mordrake, the mythical man with two faces, but Evan Peters will find happiness when his real life girlfriend, and reported on-screen love interest Emma Roberts makes her American Horror Story debut. From the looks of the promo for "Edward Mordrake (Part 1)," Jimmy and Maggie's romance won’t be easy. But what relationship is? Since Ryan Murphy confirmed Roberts and Peters' AHS romance, I'm not too worried about them finding their way together, even if it does take some time.

Here's what we know: Roberts plays a con artist named Maggie Esmerelda who shows up in Jupiter claiming to be a fortune teller. According to Ryan Murphy's interview with EW, "[Maggie] shows up at the camp to help them and it ends up terribly bad." From the previews it seems that she teams up with Denis O'Hare (Stanley) to steal objects from the freak show to sell off for cash, but then everything seems to go wrong as in the preview for the season she calls Stanley and says, "You never said anything about murder." His response? "Nobody cares what happens to a freak." Since we know she and Peters' Jimmy Darling get together, I’m thinking that while she may be frightened at first, she starts to realize that they are good people and bails on her con artist friend.

Maggie Esmerelda debuts on the first part of the Halloween episode and according to IMDB will be around for the remainder of the season (though we all know to take IMDB credits with a grain of salt). She seems to be scared of the "freaks" based on the way she exclaims "freaks!" in this week's promo, however, we know that this can’t be her outlook for long if she eventually has any romantic connection with Jimmy Darling. My guess is that she probably just gets to know them and looks past what everyone else in Jupiter fears about them.

The summary for the show says that "Jimmy is smitten by a woman claiming to be a fortune teller." So how does Jimmy win Maggie over? He could use the same technique that he did to "win over" all those lonely housewives... Of course, there's also the simpler explanation: he's kind of the patriarchal figure around the freak show and takes care of everyone, which is pretty attractive in and of itself.

But where does that leave Dot? My money is on a love triangle involving Jimmy, Dot, and Maggie. Right when Jimmy killed the cop to save the twins, Dot had those "I want to have sex with you" eyes and Jimmy being smitten with Maggie might only serve to make her angry. In fact, Murphy nearly confirmed that: "No, I don’t think Jimmy has eyes for Dot, I think Dot has eyes for Jimmy," he said in an interview with Entertainment Weekly.

So it looks like we'll see yet another set of women vie for Peters' character, and as we saw last season, that tends to work pretty well for AHS.

More like this
At 14, Jurnee Smollett Was Taking Meetings With Missy Elliot & Lauryn Hill
By Chloe Foussianes
Shonda Rhimes' Net Worth Makes Her One Of The Wealthiest People In TV History
By Hugh McIntyre
'The Rings Of Power' Episode 7 Will Feature An “Unlikely Pairing Of Characters”
By Grace Wehniainen
'Firefly Lane' Season 2 Will Be The Show's Last — But There's A Twist
By K.W. Colyard and Grace Wehniainen
Get Even More From Bustle — Sign Up For The Newsletter