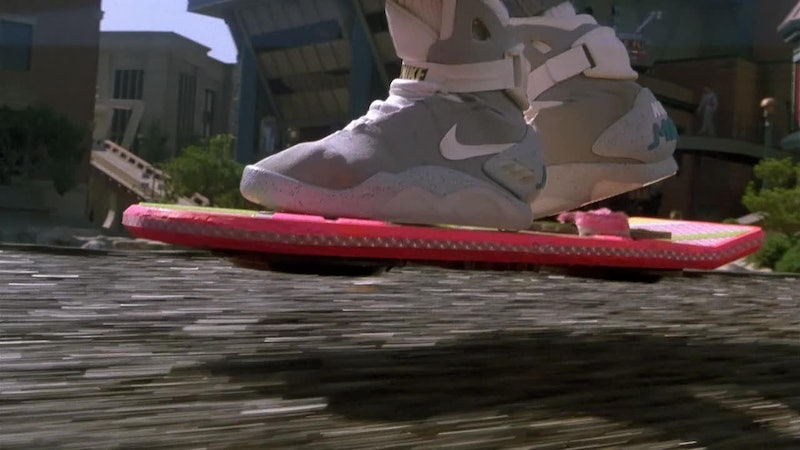 Your childhood dreams of being Marty McFly wooshing around on his hoverboard in Back to the Future II might just turn into reality soon. As long as you can pay the price. Magnetic Field Architecture company Arx Pax is developing the Hendo, the first working hoverboard, and anyone who donates at least $10,000 to its Kickstarter campaign gets to take one home. That may seem like a steep price to realize your sci-fi fantasies, but a closer look at the technology behind it — and the possibilities it presents — then $10K starts to feel like a small price to pay for the future.

In the promo video for the Hendo, the hoverboard dream starts with a child and his imagination (guess his parents never let him watch Back to the Future) as he glues his Superman figurine onto a miniature skateboard. He then brings it to his mechanical engineer dad, who takes his son's vision and turns it into a real product, the Hendo. (For the next minute of the video, the dad proceeds to ride around on the board on a half-pipe as the little boy just stands by and watches, sadly clutching his Superman doll.)

But according to Hendo founders Greg and Jill Henderson, their invention is about much more than just fun and games. It's just the first step in achieving a long-term, more ambitious goal: A world where hover transportation is standard. According to the Kickstarter page, the Hendo is a "first-step product, a precursor to the broader implementation of the world-changing technology of [Magnetic Field Architecture] MFA." One day, with MFA technology, it might even be possible for buildings to survive earthquakes unscathed.

For now, the Hendersons are focusing on the Hendo Hoverboard. They hope to reach their campaign goal of $250,000 so they can fine-tune the prototype, mass-produce it, and create a space specially designed to ride the Hendo.

So How Does It Work?

The current Hendo Hoverboard prototype, which is in its 18th iteration, is already fully functioning, floating about one inch above the ground. The Hoverboard is propelled by four disc-shaped hover engines, which create a magnetic field between the board and the ground surface and allows it to levitate.

In order to stabilize the magnetic levitation and get around Earnshaw's Theorem, which states that static levitation cannot be achieved using magnets, Hendo's team used a conductor instead to create an opposing magnetic field, which causes the hovering. The team has also striven to make their hover systems inexpensive and sustainable.

A Hoverpark Is Also in the Works

Though one day the Hendersons envision their hoverboard being able to move across any medium, right now it is only compatible with certain types of surfaces. So that's why the team also wants to build a state-of-the-art Hoverpark, specially designed for the Hoverboard. (Picture a skate park, but instead of doing ollies and grinding on ramps, you seamlessly float all along every surface.) For just $59, you can have your name or company logo etched onto a square in the Hoverpark surface.

You Can Also Get a White Box Developer's Kit

In addition to the Hoverboard, the Kickstarter campaign also includes the Whitebox Developer Kit, which uses the same hover technology but is smaller and more affordable, at $299. The Whitebox, which is controlled by an iPhone or Android and battery chargeable, comes with a compatible surface, can move in all directions, and turns on its axis. The kit allows developers to take the box apart and build their own hovering objects with the engines.