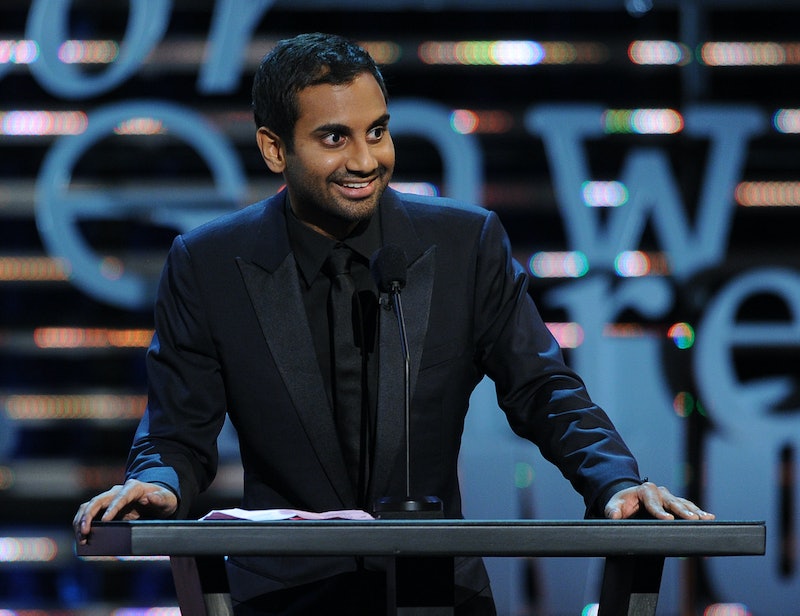 The Roast of James Franco aired last night on Comedy Central, and it was ... par for the course for a Comedy Central roast. On the dais was a gang of comedians, mostly friends, gathered to make a series of jokes, some funny, most offensive. A lot of homophobic jokes, a lot of Jewish jokes, and a lot of Indian jokes against Aziz Ansari.

The jokes about Aziz Ansari are what cut me the most. I understand there's an understanding in comedy where no subject is off-limits, but as an Indian-American, I am just exhausted by the tired stereotypes about Indian people. Some of the boring and off-color remarks made about Aziz Ansari last night:

Natasha Legerro: "Kim Kardashian is here ... Oh, that's Aziz, sorry. Aziz is only in show business because he's too ugly to be a genie. If I wanted to get yelled at by a humorless Indian, I'd read a magazine at a 7-11. [Aziz] was recently awarded the highest honor in India — soap!"

Seth Rogen: "This dais is literally Hitler's wet dream. It's got Jews, gays and whatever Aziz is."

Sarah Silverman: "I have been a huge supporter of Aziz for years, and for only the price of a cup of coffee."

I don't mean for this to be a laundry list of racist jokes from last night's roast to remind Indian-Americans that there is still "accepted" racism against them, but that's what the kind of jokes about Aziz Ansari were last night — they all touched upon his heritage, which, no matter which way you spin it, is racist. Franco's barb was by far the worst -— comparing Aziz to an animal. Aziz took the jokes in stride and laughed along, but when it was his moment at the podium, he couldn't help but comment on the continual race-related roasting:

"I think it's so cool that some of you guys were able to travel back to 1995 for those Indian jokes you did. Those stereotypes are so tired! There are more Indians with sitcoms now than 7-11's. My last three roles were Randy, Chet and Tom."

Great response, honestly. It both touches on the fact that the jokes made at Aziz's expense had nothing to do with his career or his personality but rather his ethnicity. There is still a persistent image of Indian people in Hollywood as a stock character — the hard working immigrant cab driver or convenience store owner or the highly successful doctor or engineer.

Because there is a model minority stereotype attached to Indian Americans, there is a pervasive "soft" racism that is generally accepted in Hollywood — it seems more acceptable to mock Indian culture because Indian-Americans are seen as successful in this country. Even in a group of comedians that prides themselves on wittier, smarter humor, almost each of the roasters fell back on race joke when addressing Aziz.

Andy Samberg, who turned the roast on its head with a satirical "roast of a roast" character, commented on the situation in a smart, elegant way: "Aziz' parents are from India but he were was in South Carolina. Hey Aziz, what's it like to have a unique perspective on what it means to be American, you bag of shit?"

It's just unfortunate that this "joke" had to be cloaked in heavy satire in order to work. Though in the past few years there have been more Indian actors visible in mainstream Hollywood media like Aziz Ansari himself, Mindy Kaling, Kal Penn, Freido Pinto, and Assif Mandvi, we are still by far a minority on the small screen and large, which, along with the model minority stereotype, lends itself to cultural misunderstanding and mocking.

Aziz Ansari handled the jokes with humor and grace last night, but I don't think he should have to just to be accepted by his peers in the comedy world. The Indian jokes are tired, and as an Indian-American, I am tired of them, too.