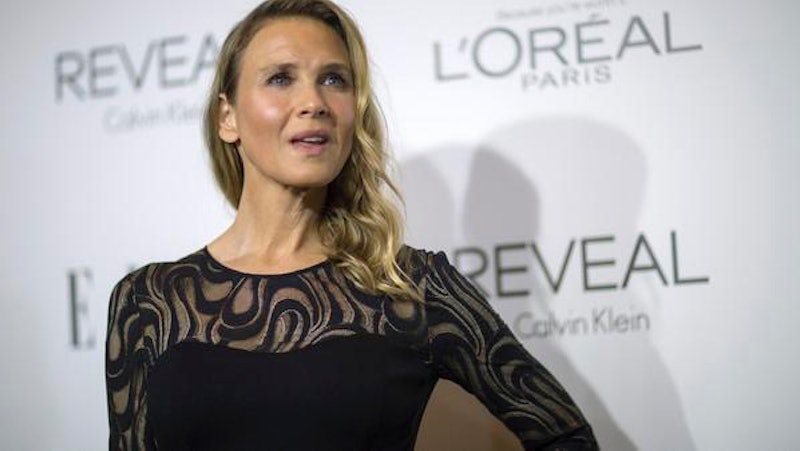 Look, it's impossible to deny that Renée Zellweger looked a little different when she appeared on the red carpet for the Elle Women in Hollywood Awards on Monday night. Like a human woman whose appearance changes as years pass — and, shocker, Zellweger just so happens to be one! — she looked a bit older than she has in some photos from a few years ago.

Though I'd hoped that since it's 2014 and many have started to finally publicly call out sexism in the media, Zellweger's different appearance wouldn't have been too focused on — after all, there are way more important things even just concerning this story that are more worthy to be reported on, like the fact that she was appearing at an awards show solely focused on honoring women who have made recognizable achievements in male-dominated Hollywood — but, unfortunately, I was thinking too optimistically for my own good. The Internet went crazy when these photos surfaced.

And then, the Internet got mean.

Apart from the headlines that actual blogs and news sites have posted that are all rewordings of the question, "What happened to Renée Zellweger's face?" Twitter seems to be the worst culprit for these downright bullying comments. With users tweeting everything from "Renee Zellweger is out here serving raisin in the sun realness" to "What has Renee Zellweger done to herself," people seem to be absolutely shocked and outraged that a human woman who makes her living as an actress changed her appearance and, gasp, dared to age.

Yes, Zellweger looks different, especially if you're comparing her pictures from Monday night with pictures from when she starred in Bridget Jones's Diary in 2001. But, I can guarantee that like Zellweger, the majority of us do not look the same as we did in 2001, because that was literally 13 years ago — so it's extremely unfair and messed up to expect Zellweger not to have changed just because she's in the public eye, even if you're making a joke of it.

And even if she did have work done — which, gasp, is another thing that aging humans sometimes do! — that would be her decision, because it's her face. No one has room to comment on it or give their unnecessary opinion either way.

We're better than this, guys.