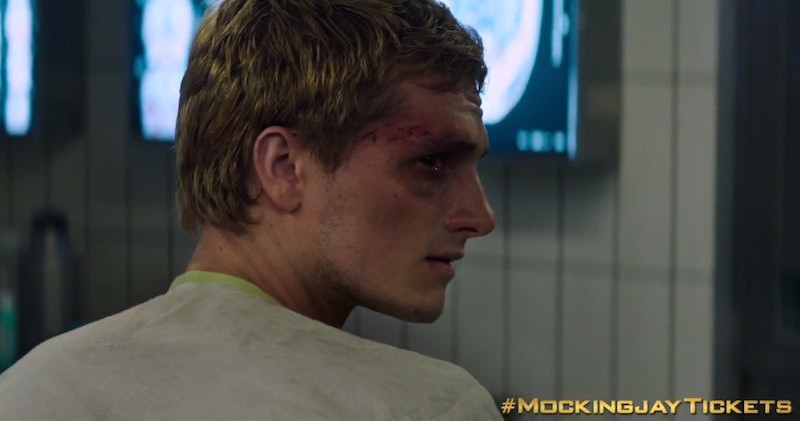 It seemed like the teases for The Hunger Games: Mockingjay, Part 1 were all Peeta, all the time for a little while there, but we haven't seen much more of the baker's son since we started getting full trailers. Well, now Peeta's made his return, in Mockingjay 's first TV spot — and it seems like Katniss might be the only one happy to see him. Let's just say Peeta's relationship with both the districts and with Katniss get a little complicated from here on out.

There are a few things that set off my Mockingjay Spidey-senses with this trailer. The first is that this thing is sponsored by Doritos, proving Lionsgate really has not learned a damn thing since their Subway tie-in for Catching Fire . There have to be non-snack brands interested in this sponsorship, you guys! If you're gonna go all Capitol-version capitalism, at least pretend to be sneaky about it!

Plot-wise, this trailer takes us through some of Mockingjay's key dynamics — including the District reaction to Peeta's call for the rebels to lay down their weapons, which is not a thing that Gale (nor the other rebels) take very kindly to. The text of the ad, too — "their freedom begins with his" — also suggests that this movie will in no way downplay the emotional set-up of the first half of Mockingjay, which sees Katniss practically incapacitated with guilt over his Capitol capturing. Not that we'd have expected them to downplay that: Katniss is rarely actually invested in her romantic life, so having the blockbuster play up her connection with Peeta (especially with Gale lurking and glaring) is some kinda way to pantomime a love triangle for the masses.

But it's the second shot of Peeta that's got me intrigued: We see him bruised and, [arguable book spoiler alert] presumably, rescued from the Capitol. It's always been my assumption (and preference) that they cut this movie right as Peeta and Katniss are coming face-to-face for the first time again — it's not a particularly uplifting meeting, but it's certainly a cliffhanger that leaves us desperate to see more of the story. This shot, I would guess, comes along pretty close to that scene. And it has me wondering where they're going with this.