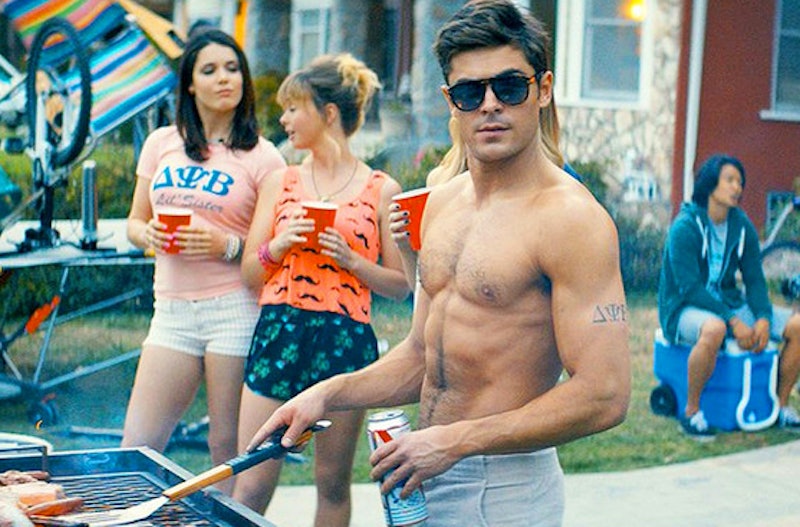 Say goodbye to the Zac Efron of yore. His head's still in the game, and his heart will always be in the song, but the days of High School Musical have come and gone. And according to the new red band trailer for the upcoming Seth Rogen/Zac Efron vehicle Neighbors , it's been replaced by fratty displays and lots of jokes revolving around the male genitalia.

Neighbors follows Rogen and Rose Byrne as a married couple living a quiet, idyllic life — until a fraternity (headed by Efron) moves in next door. Hijinks and general debauchery ensue.

Directed by Nicholas Stoller (Forgetting Sarah Marshall, The Five-Year Engagement) and written by Andrew J. Cohen (producer on various Apatown works) and Brendan O'Brien, the trailer boasts that the film is brought to you by "the guys who brought you This is The End," and it seems to be offering up a similar masculinity-driven flash. Fireworks, ball jokes, you know the drill. There are also abs and Efron's Robert Deniro impression, if that interests you.

The film hits theaters May 9, 2014, and if you've enjoyed the Apatown spinoff's other works, I think it's safe to say you'll be looking forward to this one as well.