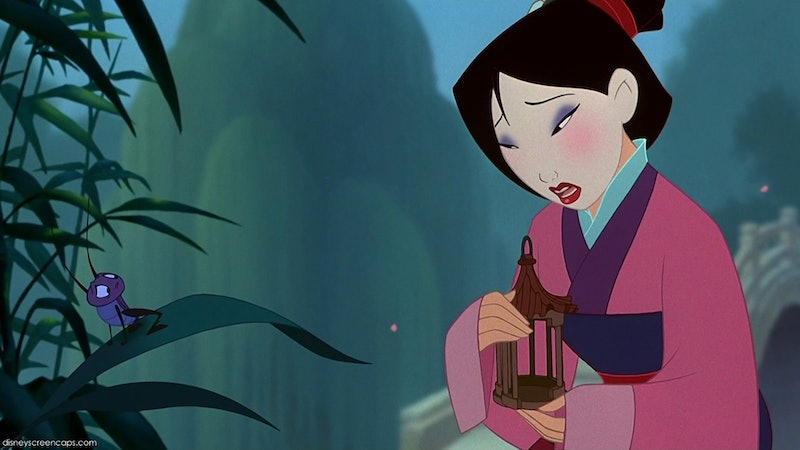 Disney is kind of like that rich kid you put up with in college for half a semester — constantly visiting fantastic countries around the world, but not always appreciating what any of them have to offer. The studio has trekked all over the six inhabited contents with its slew of animated classics, and maps its next destination at Polynesia, making its first journey to the Pacific Islands region with the upcoming adventure film Moana.

The story of Moana will set its titular hero, a teenaged girl with a thirst for high seas adventure, on a fantastical quest — complete with demigods and sea monsters — for a fabled island. Although the premise seems far from beheld to the borders of Moana’s homeland of Polynesia, fans can hope at least that Disney will draw from the culture in question to enrich the story.

But it’s hard to be sure. Disney’s track record with paying due diligence to its films’ settings is a little hit-or-miss…

CHINA: Though Mulan melds eras generously, it certainly displays a fondness for Chinese history. Social issues (like the jingoistic worship of the nation’s military, and the rigid marginalization of women) and international affairs (like the maintenance of independence from the Huns) alike all ring true, while day-to-day living and culture are captured elegantly in the film’s opening sequences.

GREECE: Hercules isn’t quite as reverent to Ancient Greece as Mulan is to Ancient China (first and foremost, “Hercules” is the name of a Roman god; “Heracles” is his Greek equivalent). The movie plays fast and loose with its source mythology, and uses Ancient Greek culture for little more than an odd pun.

NEW ORLEANS: Disney’s most recent trip to America is arguably its best. The Princess and the Frog hones in on the intricate charms of New Orleans culture with a Treme-like tenacity, a proverbial love letter to the Big Easy’s food, music, visual art, and family values.

INDIA: We never actually trek into human civilization in The Jungle Book — although, from what I hear from King Louie, man’s town is a pretty swanky place to be — so India has yet to see its proper spotlight in the Disney universe.

FRANCE: Disney has gone to this well a number of times. The first Disney cartoon set overtly in France was The Artistocats, dropped in the heat of Paris’ Bohemian artistic movement. The film’s employ of jazz-addled characters from countries like England, Germany, and Italy is rather in keeping with the spirit of the era’s city, a venerable melting pot for European artists seeking creative liberty.

A more “traditional” take on France, complete with snooty waiters and gallant dinner parties, came with Beauty and the Beast, though the film eschewed Paris for a small village in the French countryside. Visually, Beauty and the Beast is a tremendous hat tip to its setting, designing landscapes and architecture with an obvious love for the country’s 1700s identity.

Five years later, we saw The Hunchback of Notre Dame, which capitalized most dominantly on France’s cultural history. The film’s proclivity to go grim allowed for entry into 16th century Parisian elements like the combative hand of the Catholic Church, and the stark class divide (as represented by street dancer Esmeralda).

But the movie that pays the most deliberate affection to contemporary Paris is Disney and Pixar’s Ratatouille, pronouncing this affection with an immaculately designed city and a soundtrack filled with beautiful accordion music and French-language singing.

NEW YORK CITY: A small handful of Disney ‘toons have found home in the Big Apple, most notably The Rescuers — before they set off for the Devil’s Bayou, that is — and Oliver and Company. The latter, which hit theaters in 1988, entertained a strange hybrid of Charles Dickens’ London and Martin Scorsese’s Manhattan, opting earnestly for the big city chutzpah but never quite reaching it.

THE LOW COUNTRIES: Movies like Snow White and the Seven Dwarfs and Tangled never claim a location outright, but offer more than a few hints to lying in the vicinity of Germany, Belgium, or The Netherlands: architecture, attire, nomenclature, and (if you want to cheat a little) source material pins these movies to the mouth of the Rhine.

PERU: The often forgotten The Emperor’s New Groove didn’t do much to pay its Incan homeland much notice. Headdresses and palaces paid homage to the 13th century empire, but little else in the film suggested any interest in its history or setting.

THE REST OF SOUTH AMERICA: Saludos Amigos and its de facto sequel The Three Caballeros swept over a number of nations in the continent, including Bolivia, Argentina, Brazil, Chile, and Uruguay, paying tribute to natural points of pride like Aconcagua and Lake Titicaca.

MEXICO: …they also popped up to Mexico, where a scene was devoted to piñata busting, for whatever that’s worth.

THE MIDDLE EAST: Agrabah, the setting of Aladdin, is a fictional city, but borrows from countries like Saudi Arabia, Iraq, and — a bit of a jump — India. Although a post-Gulf War release date might have rendered Aladdin a tad unsympathetic to the region (song lyrics in the film such as, “They cut off your ear if they don’t like your face” suggest insensitivity), the movie does indeed dive quite energetically into its established setting, adorning its story with a flavor we hadn’t seen in ages.

POWHATAN TERRITORY (JAMESTOWN, VIRGINIA): We all know how much Pocahontas the movie fouled up American history, so let’s not even go there.

NORWAY: Frozen celebrates its Norwegian home with town design, character costumes and hairstyles, a few played-up accents, and (most of all) those names.

ITALY: Unless menacing puppeteers, carnivorous whales, and preadolescent gambling are a particular problem in Italy, Pinocchio didn’t really do its homeland much justice.

THE CARIBBEAN: Dissenting opinions have placed The Little Mermaid everywhere from the Baltic Sea (which entails some bonkers theories), the coast of Portugal, the coast of France, or the Caribbean (specifically, in the waters surrounding a French-occupied territory). The latter is our best bet, considering the presence of French cooks, calypso music, and Sebastian's accent.

HAWAII: Ditto Lilo and Stich in regards to Hawaii, which opted to focus more on the culture and lifestyle of its extraterrestrial characters than that of its Hawaiian ones.

AUSTRALIA: The Rescuers Down Under focuses more on the Australian wilderness than the culture, opting for the stereotypical characterization of its anthropomorphic Outback residents as carefree adventurers with a blind spot for headwear.

ENGLAND: The mother load. Disney must love England — London in particular — to mark it the setting of so many different films, ranging from Medieval Times to the 20th century. Among the Disney films to take place even partially in the United Kingdom, we have The Adventures of Ichabod and Mr. Toad, Alice in Wonderland, Peter Pan, Robin Hood, The Black Cauldron, and Tarzan, among others. Due to the volume, I’ll just focus on some of the best:

The Sword in the Stone (1963): Precisely what you’d want from a Middle Ages England film, complete with gargantuan castles, rotting woodlands, hierarchal hypocrisy, and an ample supply of bad weather.

The Great Mouse Detective (1986): Tackling London circa the late 1800s, the movie is riddled with the sinister but fun ambiance of Arthur Conan Doyle’s literature. You can almost taste the malaise (and the beer) as you stroll through the dank alleyways and into the modest-on-a-good-day living quarters of the suffering citizens of this nobly despondent city.

101 Dalmatians (1961): The very first Disney animated film to be set contemporaneously with its release, 101 Dalmatians offered a hip, happy Great Britain—the sort to which you dream of devoting a semester abroad —complete with blossoming love affairs and a cutthroat fashion industry. Cruella de Vil wasn’t born bad, you know. She was just desperately trying to keep up with London.