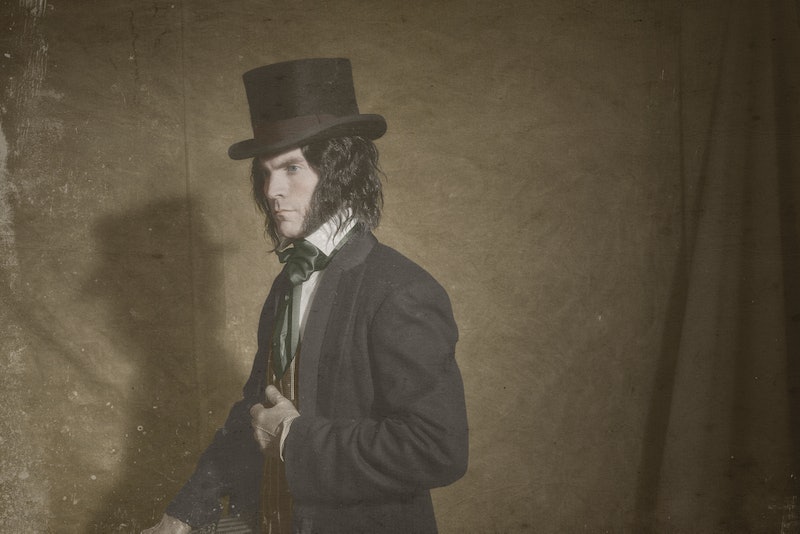 American Horror Story always has off-the-wall Halloween episodes. Every year, the show lines up one totally new element, be it zombies, pregnant ghosts, or a woman who believes that she's Anne Frank, and uses it to build an epic two-parter that introduces the big themes of the season and make things even more complicated from the characters. On AHS: Freak Show, Wes Bentley plays Edward Mordrake, a character who was described as a "a dark tormentor from Kathy Bates’ past who is hell-bent on revenge." So that brings the total of Ethel's ex-boyfriends who have shown up hell-bent on revenge to two so far.

All we've seen so far of the members of Elsa Mars' "freak" show paints them as a surrogate family, not "monsters," no matter how their matriarch likes to refer to them. But they have a dark side that I predict Edward Mordrake will be able to draw out of them — and "dark sides" is the perfect theme to explore if they're doing Mordrake's story.

The story of Edward Mordrake dates back to Victorian era England. According to the urban legend, Mordrake was a rich, handsome man who was born with a second face on the back of his head that gave whispers that only he could hear, encouraging him to do terrible things. When the whispers became horrifying enough, Mordrake found poison with which he killed himself "in his twenty-third year." I'm sure we can count on AHS to juice up the whispers so we — and not just Mordrake — can hear what's tormenting him. And instead of simply taking his own life, I'm sure he'll act out some of those devilish whispers. How else could this sustain the pure weirdness of an American Horror Story two-parter?

The murderous voice and the face's twisted position on the back of his head were the addition of superstitious storytellers, but surprisingly, the condition may have been real. There is a genetic complication called diprosopus that causes embryos to develop multiple facial features that could result in one person to be born with two faces. But most babies born with partial or whole diprosopus die in infancy, either because of other conditions or for unknown reasons, and there is no well-documented account of a person with diprosopus living to adulthood. The closest was an Indian child named Lali who lived a somewhat normal life with complete facial diprosopus for several months.

AHS isn't exactly known for its scientific accuracy, so it probably will go full-tilt to the supernatural side. My guess is, once Mordrake appears, Dot, Bette, and the rest of the freak show cast will have to band together to defend themselves from his super strong evil side, only halfway through for some regular townsfolk to try to burn down the campground or something. Then he'll walk off the set and never be seen again. Ahh, the usual breakneck pace and lack of logic of the typical AHS episode.