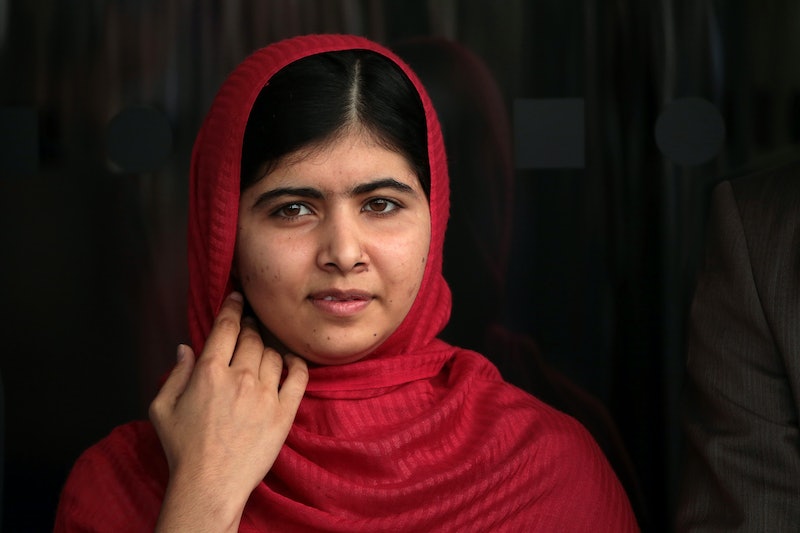 At the age of 17, Malala Yousafzai is the youngest person on Forbes' 30 Under 30 — the Social Entrepreneur edition. In under two decades of life, the 2014 Nobel Peace Prize winner has survived a Taliban attack, written a best-selling autobiography, co-founded an organization to help educate young women, and redefined expectations for teenagers around the world. Her grace, poise, and humor have endeared her to women around the world, and it seems only fitting that she give the keynote address at Forbes' 30 Under 30 summit, where she defined feminism and reminded us that education, and not violence, is the best defense for our children.

These messages are deeply embedded in Yousafzai's Malala Fund, which seeks to "create a world where girls are empowered to reach their potential through a quality education." As the Fund notes, 66 million girls are out of school around the world, and this lack of education is brought about by a number of factors, including child marriage, human trafficking, and social stigma surrounding women's education. Every three seconds, the Fund says, a girl becomes a child bride, and four out of five victims of human trafficking are female. Moreover, women across the world have been socialized to dream smaller, which is an issue Malala tackles in her speech. Here are just a few of the most inspiring quotes from Malala's keynote at Forbes' 30 Under 30 Summit.

On The "woman's job"

It is the woman who controls the whole house...it's her job, that's what she's supposed to do...We have to change this idea that women are not only supposed to work in the house...but she also has the ability to go outside and do business, to be a doctor, to be a teacher, to be an engineer, she should be allowed to have any job she likes. She should be treated equally, as men are.

Even in the United States, there is a clear expectation for women to complete her duties as a wife and mother in the home in addition to excelling outside of the home. The 2013 Bureau of Labor Statistics report found that 82 percent of employed, married women did daily housework, while only 65 percent of men could say the same. Moreover, even for men who did do their chores, women spent more time on domestic duties.

The best way to fight terrorism is to invest in education. Instead of sending guns, send books.

If only our own defense policy were so clearheaded. Terrorism, Malala and many others believe, is a byproduct not only of ignorance, but of a failure to educate young women in particular. In a beautiful 2013 op-ed for the Los Angeles Times entitled, "Want to fight terrorism? Educate women," Malcolm Potts points out that when Mali decided to de-emphasize family planning, which he writes is known "to be an extremely effective way to empower women and stretch scarce resources," women's rights in the country plummeted.

The population has boomed, a result of polygamous marriages of 10-year-olds to 40-year-olds, and women are responsible for a disproportionate amount of work. The population has more than doubled in just two decades, and the 9/11 Commission investigating the Al Qaeda attacks said that a sudden increase in the population of young men without the possibility of gainful employment "a sure prescription for social turbulence."

Potts reports that the US has spent "$620 million training local armies in counter-terrorism tactics in the Sahel." But that money would be better spent, he argues, "helping to give women the autonomy to decide when to marry and when to have children." Despite the enormous sums of money spent on the Iraq and Afghanistan wars, neither country is on particularly stable ground, as evidenced by the rapid rise to power of ISIS. Why? Because, Potts says, "Afghanistan and Iraq are high-fertility, patriarchal societies, and our intervention did almost nothing to help women."

Last year, Malala said something similar on BBC's Panorama program, stating, "The best way to solve problems and to fight against war is through dialogue. The only thing that can fight against terrorism is education."

On the importance of questioning

The important part of life is to question. We should have the ability to ask: why?

In patriarchal societies the world over where women are expected to accept their station of life, this statement could not ring truer. By encouraging women (and men) to question their surroundings, Malala debunks the common myth that love is synonymous with blind acceptance. Rather, loving an institution necessitates constant challenge and a constant desire to improve through asking, "Why?"

On being a feminist

I fight for women's rights.

The simplest explanation is often the best.

When I grow up I’ll become the prime minister and I’ll bring the change.

I can't imagine a better person to carry on Benazir Bhutto's legacy.