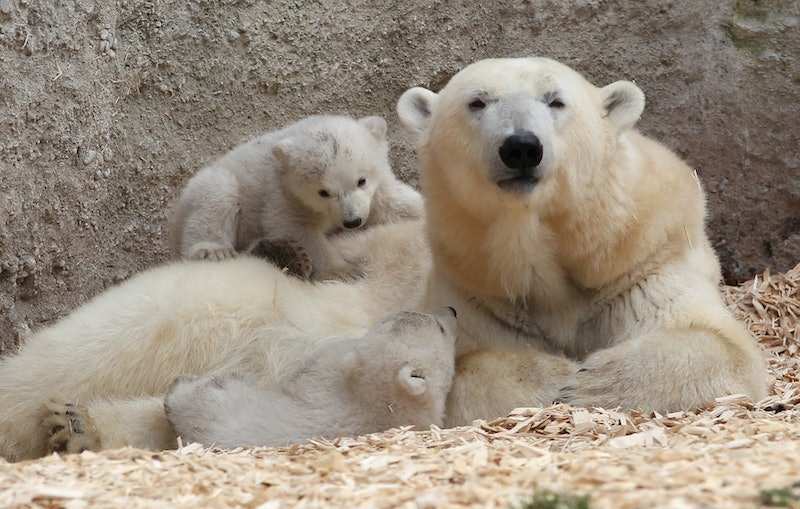 If you've never cared about climate change before, start caring now. Do it for the children. Specifically, the Canadian children whose Halloween is being ruined by polar bears who are coming into town and making it too dangerous for normal trick-or-treating. Instead of going door to door like you're supposed to do when you beg for sweets, these kids will instead have to spend the holiday inside. You know what they call extended hours spent indoors with children in America? School.

Even if kids aren't your cup of tea, consider picking up the fight against global warming for the sake of the poor polar bears whose natural, icy habitat has been melting for the last several decades, forcing them closer and closer towards the humans of Arviat, Canada. The bears generally prefer to stay along the coast, where they can easily access fish, seals and other prey. But as the ice recedes, so must the polar bears. While these animals want nothing more to do with the humans than the humans want to do with them, the deterioration of their homes has forced them to migrate inland towards townspeople. This means that there has been a spike in the number of human-polar bear interactions in the last few years.

And given that Halloween generally involves over a thousand children running around Arviat, Canada during late hours, it comes as no surprise that the small Canadian community began looking for safer alternatives to keep polar bears from confusing their children from leggy seals. Steve England, Arviat's senior administrative officer, told CBC,

Picture 1,200 kids going door to door in Arviat in the middle of polar bear season. It's a pretty obvious conclusion of what tragedies could come out of that. We're just trying to safeguard the younger population by offering an alternative.

That alternative, England says, will be a series of shuttle busses that will transport the children of Arviat safely from their homes to the community hall, where they will be able to participate in "organized trick-or-treating." In addition, the community hall will also feature face painting stations and a haunted house. Of course, if you want a real scare, going outside and braving the possibility of a polar bear will probably do the trick.

Unfortunately, due to the size constraints of the hall, not all 1,200 children (and other older participants) will be able to attend simultaneously. Instead, Arviat is toying with the idea of allowing various age groups to celebrate Halloween at different times. So now, not only is Halloween not going to take place outside, it's also going to have a discrete time limit and only include people of your age. Do you see how global warming — and our ignoring it — is literally taking the fun out of everything in life?

While the people of Arviat are not unaccustomed to seeing bears roaming through the grounds, they aren't used to the bears making such early appearances and staying around for quite so long. The Hudson Bay, where Arviat is located, has felt the effects of climate change more acutely than much of the world. Over the last two decades, temperatures in the Bay have risen about 3 degrees Celsius, which is three times greater than the global average. As a result, the ice freezes much later in the season, and in the meantime, the bears have to find alternate habitats, shacking up alongside their human counterparts.

To deal with the polar bear population boom, Arviat depends on its resident polar bear monitor, a brave man named Leo Ikakhik. For the past three years, Ikakhik has been responsible for ensuring that polar bears are safely and humanely kept away from the human residents of the town, and he has been remarkably successful in his attempts. Previously, Arviat residents dealt with polar bears by killing them, but that was problematic for both the World Wildlife Fund and the community itself, which runs an annual quota on the number of polar bears allowed to be killed. So instead, Ikakhik and his colleagues turned to rubber bullets, cracker shells and other scare tactics that will cause the animals to turn tail without inflicting any real harm.

Only three polar bears were killed in self defense in 2011, and since then, not a single one of these creatures has been killed by an Arviat residence. More importantly, there also have not been any bear related human casualties either. Last September, a sled dog was killed, but that was the extent of the damage.

And to keep things this way, Arviat has taken great pains to ensure that this Halloween, the peak of polar bear season, will not end in tragedy. If all goes well, England hopes that indoor Halloweens may become a Canadian tradition. "The bears have already adapted to climate change,” England told Public Radio International, “Now it’s our turn."

More like this
If You Have Pets, You Probably Don't Realize You're Making These Common Mistakes
By Mackenzie Edwards
Target's Best Holiday Gifts For College Students, All Approved By An Actual Gen-Zer
By Casey Clark
These ‘Love Actually’ Plotlines Are “Out Of Date,” According To Director Richard Curtis
By Grace Wehniainen
This Iconic ‘Love Actually’ Scene Drove Alan Rickman “Insane”
By Grace Wehniainen
Get Even More From Bustle — Sign Up For The Newsletter