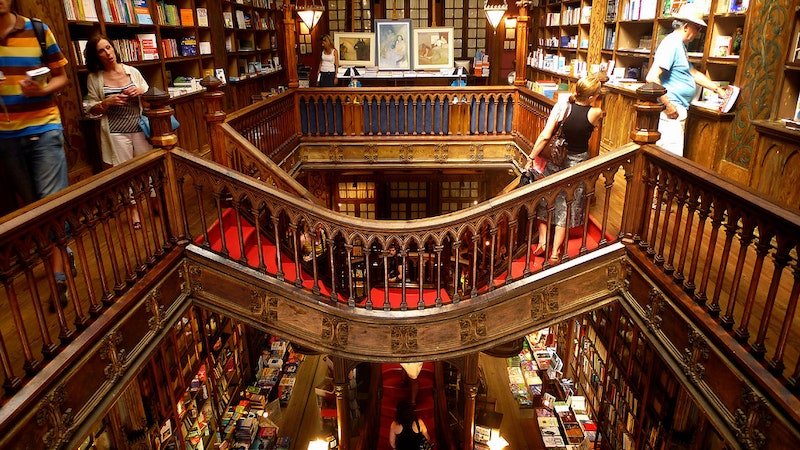 It seems like either a dream or your worst nightmare, but the story of a U.S. tourist trapped in a London bookstore gathered a whole lot of attention on social media as he relayed his predicament. David Willis says he was upstairs in the Waterstones in Trafalgar Square just around closing time, and when he came back down, he saw that all of the lights were turned off and the door was locked. When he tried to exit the store, he told CNN, he set alarms off, but still no one came to his aid.

It wasn't until he posted a photo of a locked door to Instagram with a description of what happened that social media really started to get on board. An hour later he Tweeted to the official Waterstones account, this message:

Hi @Waterstones I've been locked inside of your Trafalgar Square bookstore for 2 hours now. Please let me out.

That really gave his story legs. People began tweeting at Willis with suggestions of what to do, from relaxing and reading a book, to building a book fort, to grabbing a spoon (I suppose) and using the original copy of The Shawshank Redemption to dig his way out. The hashtag #FreeDavidWillis was born.

After two hours, Willis was freed. And while I'm sure this wasn't an ideal situation, perhaps it could be? Frankly, I wouldn't mind being trapped in a bookstore — if I were prepared. If I were to be unlucky (or lucky) enough to be trapped, I hope it'd be in one of these 11 international bookstores:

Gosh, I hope I'd just happen to have my running sneakers that night because 18 miles of books is a lot to cover. If I were trapped in the iconic Strand, I'd grab some of its vintage vinyl and blast it as I ran from section to section to section before I finally collapsed for the night in the Rare Book Room.

Seems like that fancy Oriental rug wouldn't be a bad place to cozy up with with the first edition of The Bluest Eye by Toni Morrison (only, $2,500!) and settle in for the night.

It's every beatnik's dream of being trapped in City Lights, and to do it justice, you must spent the night in the Poetry Room.

It's where Allen Ginsberg spent a whole lot of his time after the City Lights' Publishing side famously released Howl and Other Poems to a massive outcry about its obscenities and homosexual content. Really all you need for a night here is a massive jug of wine and your screaming voice for belting out (dare I say, howling?) the poem.

All I want to do is crawl under all of these books and make a book blanket that smells gloriously like old paper. Luckily, Shakespeare & Company also has beds, so you'd have a real place to sleep. As the story goes, according to The Telegraph, late operator George Whitman only had two rules for staying at the bookstore:

Whitman ran his shop as a species of anarchic democracy, even though in some respects he was a benevolent dictator. Anyone who called himself a writer could find a bed there, if there was one free, and stay as long as he liked or until Whitman got tired of him. The only rule for residents was that they must read a book a day and serve in the shop for an hour.

If your friends are with you by some stroke of luck, it's absolutely necessary to perform A Midsummer Night's Dream. No question.

Speaking of friends, if I'm sleeping over at Bluestockings, I'm gathering all of my best girl friends and having a grown-up sleepover party with all of our sleeping bags facing into a circle at the center. Except instead of truth or dare and painting our nails, we'll chit chat as we pass around some Miranda July for a read-along, and when it gets to be late-night, we'll peek into the pages of some of the collection of smutty fiction.

My only other hope is that the adorable dog is there with us.

El Ateneo used to be a theatre, then it was just a movie theatre, and then someone who can only be described as a genius and a person who sees deep into my soul made it into a bookstore. If you think there won't be a song and dance performance on that stage, then you don't understand accidental sleepovers.

Prairie Lights has soaked up so much literary cred from the Iowa Writers' Workshop nearby that it's practically bursting at the seams. It's a regular stomping ground of plenty of Pulitzer Prize winners, so I'm afraid I won't get much reading done because I'm just going to be going from chair to chair, thinking, Gloria Steinem totally sat here. Seamus Heaney sat here. Annie Proulx sat over here...

Basically, this means that the bookstore's awesome coffee shop is going to need to be churning out espresso.

The Lello Bookstore in Portugal looks like a movie set for the perfect fictional bookstore. First of all: If you're trapped in this bookstore with me, I'm going to insist we slide down the stair banister. Second: I think the landing of the stairs is perfectly set up for the classic balcony scene in Romeo and Juliet, so that will definitely be happening, too.

If we get trapped in Politics & Prose in Washington D.C., can someone promise that Joe Biden will be there to read us scary stories? I'll bring the flashlight he can hold under his face.

No, this isn't the Church of Literature, but it may as well be. Selexyz Dominicanen bookstore is housed in an 720-year-old former church, and it has kept much of the original architecture. And just because I always wanted to yell out in church when I was a kid, I'm crossing my fingers that I'd have my rollerblades on my person so I could skate around on the floors singing songs from Beauty and the Beast to see if I could echo.

Scarthin Books looks like the kind of place you'd like to actually be trapped in for the whole winter season. I'm drinking so, so much tea when I sleep over because it just feels cozy.

No crazy antics here, I'm dragging one of these armchairs right to a window with that stunning view, plopping down, and just reading all night long.

Dear Universe, I'm begging you to trap me in Cook & Book. We can pretend it was an accident. It's some crazy Tim Burton dreamworld with books flying on the ceiling, and so many differently themed rooms that it's going to take me at least the night just exploring, jaw dropped.