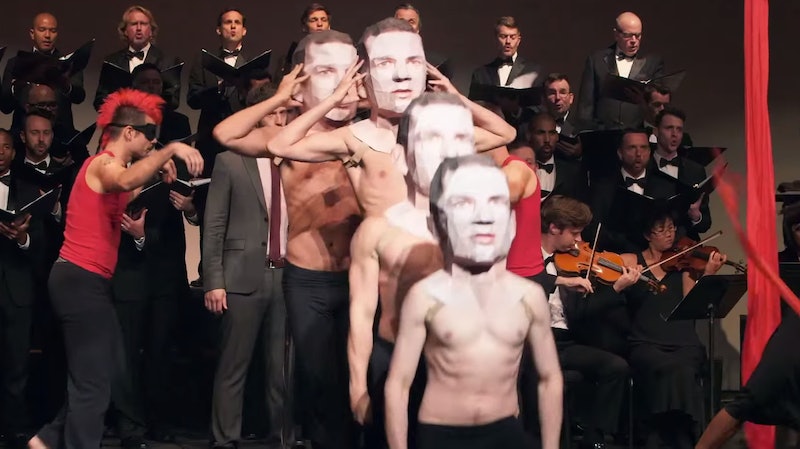 About two years ago a wonderful thing happened to the Internet and a very weird thing happened to Shia LaBeouf: The Rob Cantor song "Actual Cannibal Shia LaBeouf" made its debut, constructing a narrative around LaBeouf being some kind of cannibal you fight in the woods. It was marvelous. And now it's back: "Actual Cannibal Shia LaBeouf" now has a live action video, and it is one of the most epic, bizarre, glorious things I've seen in a long time. Oh, and the actual (cannibal?) Shia LaBouf makes a cameo.

Things have gone noticeably very wonky for LaBeouf since this video first premiered: He went through some things very publicly, wearing a bag on his head and crying at reporters in the name of apologetic performance art. As LaBeouf repairs his image on the Fury press tour, it's actually kind of fitting that this live interpretation come along now — it's not that outlandish to imagine LaBeouf pretty much anywhere at this point, so why not confronting his very own cannibalistic meme? Sample lyrics:

Living in the woods (Shia LaBeouf)

Eating all the bodies

For real though, this video is like the coming to life of a club pitched by Stefon: Choreographed dance, singing children, dancers wearing giant papiermache Shia LaBeouf's head. It is a modern marvel, and we must appreciate every second of it.