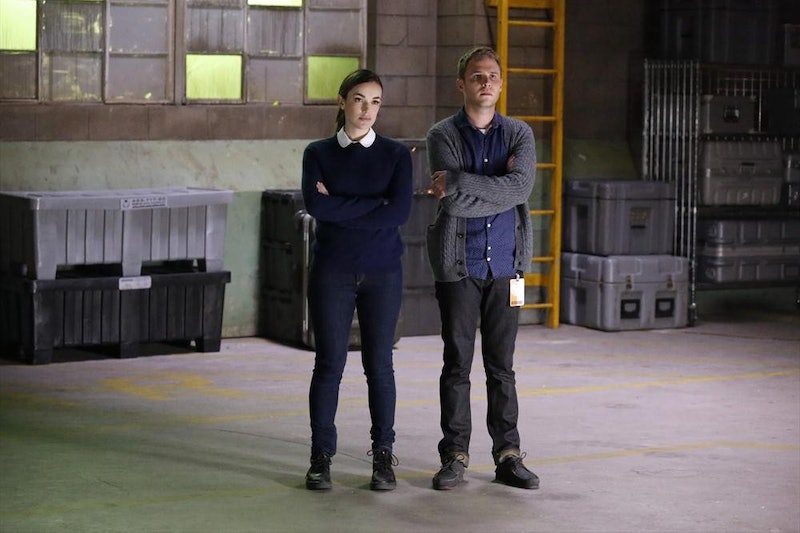 Finally, we can all breath a sigh of relief. Phantom Jemma Simmons is gone for good. While it's been very tense watching Fitz talk to his subconscious in the form of Simmons, I am glad to see the real Simmons back on the bus with the others. My only concern is, now that Agents of S.H.I.E.L.D. has reunited Fitz and Simmons, will they ever be able to go back to the way they used to be? Aside from the fact that Fitz is still having trouble communicating, the two of them have both been through a lot. I was happy that they had some time to grow as individuals, but now that they're together again, I worry that things won't ever be the same. Or at least, for a while. We still don't know the real reasons why Simmons left to infiltrate Hydra. Now that she's back we may finally get some clarity.

As Fitz pointed out last week, he told Simmons how he felt about her and she rejected him. That's rough stuff. However, considering their relationship is built on more than just attraction, they should be able to work something out. Or make out. Either works. Elizabeth Henstridge kind of has chemistry with everyone, so sometimes I don't know what to feel. She and Tripp were kind of hitting it off at the end of last season. Did you see how she was fawning over Bobbi Morse in this episode? That girl's got charm for days. However, I want Fitz to be happy and one would think that absence has made Simmons' heart grow fonder.

I also do worry that this will interfere with Fitz's recovery. Don't hate me! But he was doing really well without Simmons and now she's back. Granted, she's back in the flesh, not the mind, but still. I hope he doesn't forget about his new bros too quickly. Or at least, that real life Simmons doesn't walk on eggshells around him like Phantom Simmons did.

But honestly, I'm just putting up a tough front. I teared up the second they laid eyes on one another.