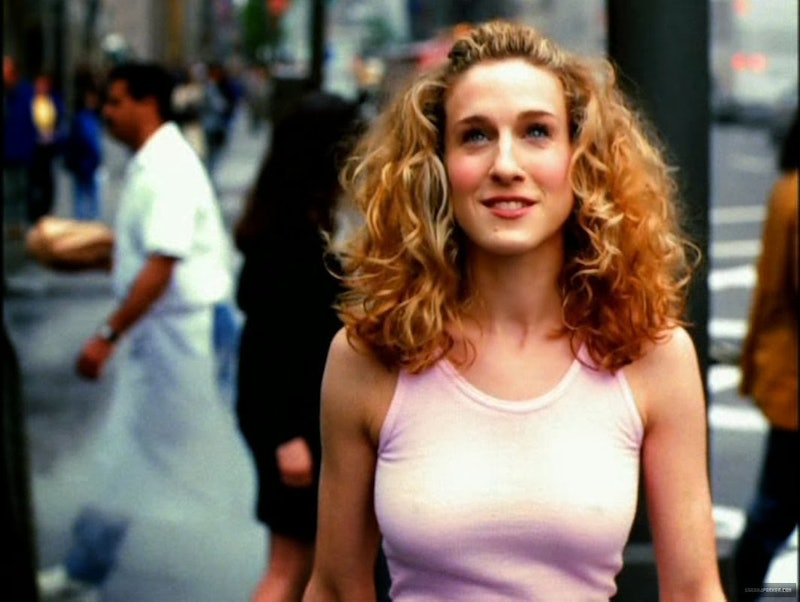 Someone's infringing on a woman's right to shoes! In fact, Sarah Jessica Parker tried to use the iconic Sex and the City stoop for a shoe photoshoot and got into a little bit of trouble. Apparently the real-life owners are not too keen on fans making a sanctuary out of a building they choose to call home. You know who probably wouldn't have minded? Carrie Bradshaw.

Yes, Carrie's shoe obsession characterized, consumed and indebted the series' Botticelli-haired heroine, and had someone lined up a multicolored selection of stilettos on her step, she probably would've died of excitement. From Louboutin's to Jimmy Choo's and yes, of course Manolo Blahnik's, she had a collection of heel-breaking footwear that would put even the most hardcore shoe collector to shame.

In retrospect, was it maybe, I don't know, a little excessive? Could Carrie have saved the money on more practical things, because let's be real, it's not like writers make serious bank? Maybe. But who would watch a show about four women bartering prices at a car dealership? Or imagine Carrie, the woman who couldn't figure out how Instant Messaging worked, trying to understand the stock market. Yeah, no.

Anyway, here's a fond look back at some of Carrie's finest, albeit batshit insane, shoe moments. Undoubtedly, Parker would've been proud.

From the "Power of Female Sex": The Great Manolo Robbery

After she takes a wrong turn into the wrong neighborhood, Carrie gets robbed at gunpoint. And not only does the thief take her baguette. He takes her pair strappy sandal Manolos. "Please, sir, they're my favorite pair!" she begs. Carrie, you're being robbed, settle down! Cher Hororwitz thinks you're being unrealistic!

From "The Real Me": Carrie Takes a Tumble

I'm a little sympathetic about this, because it's genuinely cringeworthy to watch Carrie participate in a fashion show utilizing "real people" and insists, "feel free to put me in big shoes." So they do, along with bedazzled panties (glam!) and she totally face plants on the runway. Then Heidi Klum steps over her. It's a whole thing.

From "Ring a Ding Ding": Carrie Can't Afford Her Apartment, Because Shoes

After enduring another break-up with Aiden and mulling over the option to buy her apartment, Carrie tries to figure out why she's so broke. Miranda ends up estimating that she's spent about $40,000 over the years on shoes, to which Carrie quips, "I will literally be the old woman who lives in her shoes!" UM, THIS IS NO TIME TO JOKE, YOU HAVE A SERIOUS PROBLEM. Charlotte ends up loaning her the money. Enabler.

THIS I actually understand, because every year I'm on the hunt for a new pair of Mary Jane heels. Basically, Carrie finds this "urban shoe myth" while playing in the Vogue fashion closet and properly freaks out. She also freaks out almost as much when her new mentor, trousers down, propositions her. Awkward.

Big announces he's moving to California, and Carrie buys new heels for one final fornication. Which is... you know, adorable, thinking a straight man is going to be turned on by her heels, especially the Barbie pink ruffled pair she purchases. Miranda, of course, decides to cock-block the entire situation by going into labor and then getting her amniotic fluid all over the shoes, to add insult to injury. THANKS, MIRANDA.

From "A Woman's Right to Shoes": Manolo Registry

Carrie loses some silver open-toed Manolo's at her friend's baby shower and it becomes a whole thing. I mean, she doesn't play favorites with her shoes, but these were very special. They created an ensemble. Anyway, when her friend Kyra only offers to pay for half (and essentially shoe-shames Carrie for spending so much money on her single self) Carrie decides to get married to herself. She send an invite to Kyra, with one thing on the registry: her silver open-toed Manolos. Crafty. Passive-Aggressive. A little bit insane.

From the Sex and the City Movie: Big Proposes with Blue Heels

Lame. Just lame. Honestly if I guy tried to Cinderella me, especially the guy who publicly humiliated me by bailing on our elaborate wedding, I'd vomit all over that fabulous closet.

More like this
Here Are All 703 Outfits Rachel Wore On Friends
By Kat George
Behold: The Wildest Fashion Moments of 2022
By Dominique Norman
Kim Kardashian Is “Disgusted & Outraged” By Balenciaga Ads
By El Hunt
2023 Piercing Trends That Will Upgrade Your Body Art Game
By Carolyn Steber
Get Even More From Bustle — Sign Up For The Newsletter