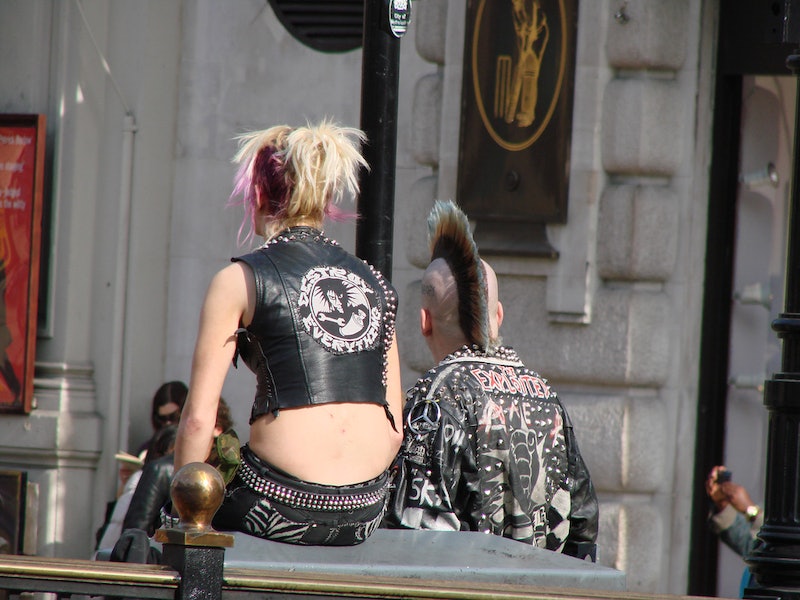 It seems like every decade, the fashion gods revamp punk culture into an acceptable fad that blends teen angst and adult edginess into a modern trend the masses can all enjoy. The late '70s and '80s come back in full retribution of a movement cut short by the drugs, uncomplicated chords, and of course, Ronald Reagan. Suddenly, celebs that were showcasing whimsical A-line skirts and peasant blouses last year can be found frequently dripped in black leather with a ripped Ramones T-shirt crisp from Topshop.

Like many adult punks, I entered the punk scene and my teens at the same time — and for many of the same reasons that ran deeper than fashion, even deeper than music. I was bullied quite heavily throughout middle school and junior high in my small Catholic all-girl school in New Hampshire. Being the only black person in my grade wasn't the only thing that made me a target. My parents chose not to baptize me and left the decision up to me, therefore, I literally questioned EVERYTHING I was told with regards to religion and American history. Eventually, my parents had no choice but to force me into social activities with kids from public schools. It was there that I found a group of misfits that accepted me and rejected the small box that our young women are expected to fit into.

I found myself and my confidence through punk and hardcore music. Of course, it took a little while to find out exactly where in the scene I fit fashion-wise. I went from a goth punk, to a rude girl, to a slightly unkept crust punk, to a hardcore girl that had an extreme desire to throw down in the pit. Back then, posers were worst then the preppy bullies that we openly discarded. Too often there would be well-meaning folks that donned the punk fashion without the punk passion. We wanted proof of your punk camaraderie and we wanted to know that you were in this lifestyle for good.

Of course, you had to do that without ever actually calling yourself a punk. At some point, we all moved on (however slowly) from the fashion of the scene: Band tees were no lo longer acceptable for every occasion, mo-hawks were highly frowned upon at job interviews, and wearing a faux leather skirt became less comfortable as I slipped into my twenties. Moreover, the need to prove our identities to our peers and society became unimportant.

When the sales associates at stores start looking like Nauseating Nancy with the hygiene of Gwen Stefani, I don't cringe: I smile to myself and wonder if that means they have fingerless lace gloves inside. I still look at myself as a grown-punk, my mentality has very much stayed relentlessly in touch with doing whatever I want whenever I want. And so, my fellow ex-teen-punks, I present you with a few things that only we can truly understand.

Putting patches on your jackets let the world know your fave bands and pretty much served as free advertising for underground bands. My lust for patches is just not the same anymore knowing my mother isn't readily available to sew them on.

2. Clean Pairs of Chucks Look Incredibly Weird to You

I never realized how BRIGHT the white soles of Chuck Taylors were until one of my high tops went missing and I had to replace them. The first time I wore them, I felt self conscious about the practically glowing kicks on my feet. Most people complimented on how I kept my shoes so white, but a few fellow punk pals nodded in grave understanding: Those chucks look way too shiny and new.

3. The Same Person Has Outbid You on E-bay For Several Tees and Records... and you're PISSED

There are few times where I shake my fist in the air and scream someone's Internet handle at the top of my lungs in a high-pitched rage. The band tee you've been coveting for years is finally up for grabs — and it's the original print and graphics. Yet, someone who you're certain wont appreciate it as much as you would, now owns it. UGH.

4. Dress Codes Are The Devil

What kind of fascist nonsense is a dress code? No tattoos?! This sucks.

No doubt, when I see the familiar four bars of Black Flag on a hoodie, tee, or tattoo, you just can't help give a head nod to a fellow punk rocker.

6. Drinking a Beer with Your Slightly Faded Straight Edge Tattoos

Fortunately, there is little shame attributed to an adult that broke their edge: Abstaining from alcohol, drugs, and promiscuity seems like a great idea when you are young and even into your twenties... but most grand claims we make in our teens were meant to be broken.

7. The Confusing Color of Shoelaces

Doc Martins are back and it seems like I'm constantly confused when I see someone wearing white or red shoelaces. Apparently, not everyone abides by punk color codes and most people now are simply just picking a shoe lace color at random. Kids these days, man.

8. There is Nothing Comfortable About Fishnets...Ever

Fishnets are are incredibly sexy... until you take them off and have hilarious lines imbedded on your skin. Thank goodness you learned this lesson in your teens.

9. Your Tattoos Probably Aren't As Important As You Thought They'd Always Be... And That's OK

I try not to look incredibly inconvenienced when someone decides they'd like a run-down of all of my tattoos and what they mean to me. Here's the truth: There is no deep significance to any of my tats; the only thing they represent is a moment in time. Some of them have been done in a dank basement with nothing, but sterilized needles, ink, and rubbing alcohol with my favorite people. Most are simply because I felt like it. But they still look pretty dang cool.