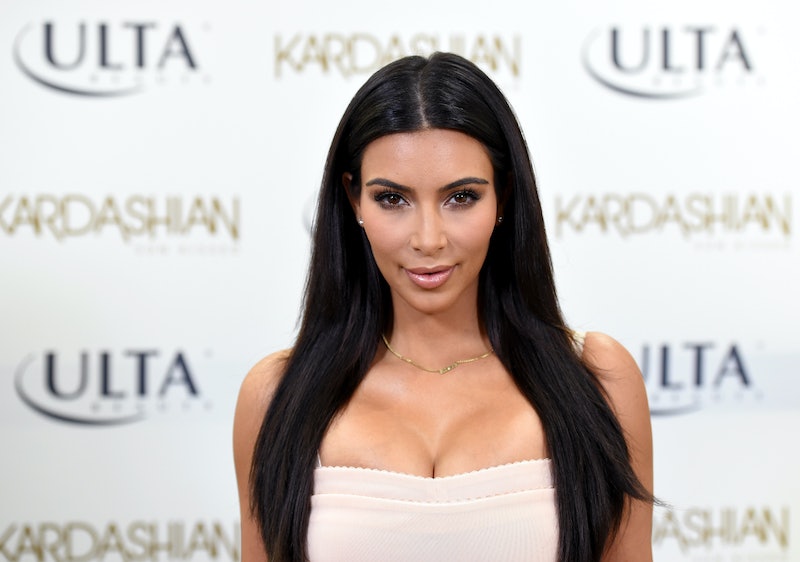 You might have seen photos of Kim Kardashian when she was a kid before, but have you seen her in action? An old video of Kim Kardashian at age 13 was discovered by Entertainment Tonight ("deep into our ET vaults," as they suspiciously put it), and let me tell you, it's pretty overwhelming. The footage was taken at Kardashian's eighth-grade graduation and she is hyper, chatty, and extremely excited about her bad dancing —which is totally normal activity for a tween — but the strange thing is what Kardashian is chatty about. She goes on about how she wants to be famous, how she's the most popular in her class, and how everyone loves her the most. It's simultaneously adorable, yet frightening because I think Kim Kardashian has prophetic powers.

Kim Kardashian is CRAZY famous. Much like words fail Kanye West when he attempts to talk about how much he loves her, words fail me when I need to explain just how famous she is. SOOOO FAMOUS. There, I think that covers it.

In the video, Kardashian says, "Is anyone getting a tape of this? Because I hope you do so when I’m famous and old you can remember me as this beautiful little girl." She. Talks. So. Fast. Kardashian has really chilled out in the past 20 years. Maybe she decided to take it easy after she achieved her goal of fame.

Other highlights from the tape include her saying, "I’m dope on a rope, and you should learn my vocabulary." Hey! It was 1994, people! Also, I'd like to add that these rhyming skills make it clear she knew she'd end up with a rapper. She's psychic, I tell you! When asked what dope is, she responds, "Dope is Kim!" She's amazing. Please, Kim, start talking like this again.

Later she says, "I’m more popular than she is" and "I’m so popular and everyone loves me." This reminds me of the episode of The Office where we see footage of Michael Scott as a child and he says he wants to be married and have a hundred kids when he's older so that no one can say no to being his friend...EXCEPT THAT EVERYTHING CAME TRUE FOR KIM.

Okay, so not everyone loves her. But she is very, very popular.