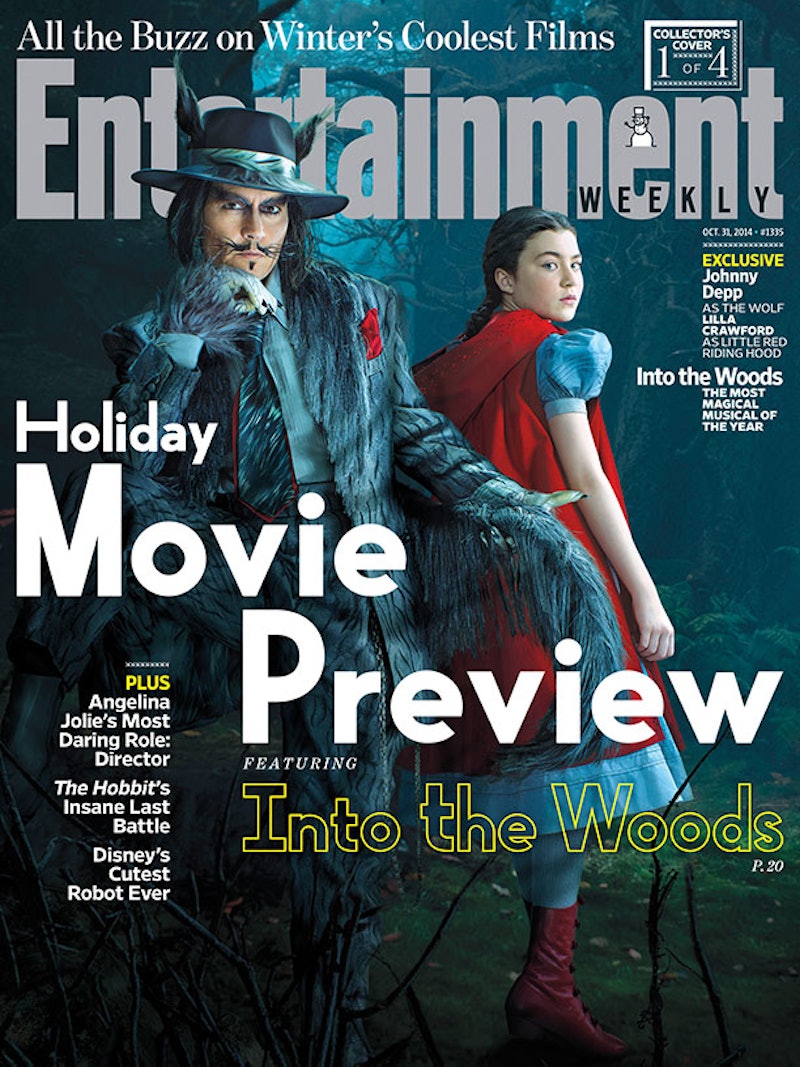 I know it's unfair to blame Johnny Depp for the travesty that is his Into the Woods costume, but old habits die hard. The patron saint of sigh elicitation has revealed the previously unseen garb for his Big Bad Wolf role in the upcoming big screen version of Stephen Sondheim’s fairy tale musical, prompting the question about whether or not Depp — or anyone in the film’s costume department — has ever actually seen a wolf.

The decidedly creepy getup hearkens back to a lot of things, but America’s beloved canis lupis and its nefarious incarnation in Sondheim and James Lapine’s stage musical are not included among the lot. But maybe there were ulterior inspirations for this attire, extra-curricular influences on the latest version of the character. Perhaps, in fact, Depp was looking to embody an entirely separate pop culture entity altogether, using the platform of an Into the Woods movie to showcase his true passion project.

Any of these theories would better explain the new outfit than whatever "creative direction" in which Disney insists it is driving the film. In taking a cold, hard, shudder-inducing look at the apparel, I can’t help but wonder… what, exactly, was Depp going for here?

THE WOLF FROM TEX AVERY

Tip of the long-eared fedora to those who pointed out the similarities between Depp’s Big Bad Wolf and the howling sexual deviant brought to life 70 years ago via the animation stylings of Tex Avery, zoot suit and predatory stare all in check.

Maybe I just have musicals on the mind, but Depp’s animal ears and humanoid face looks better suited for belting “Memory” than it is for “Hello, Little Girl.”

But if the gallantry of Cats seems too lavish for Depp’s halfhearted pelt, maybe he’d be better suited for subterranean budgeted Wee Sing children’s videos from the early ‘90s. Depp’s B.B.W. looks a little too similar to Little Bunny Foo Foo’s “goon” stage for my tastes.

Depp isn’t going to let the likes of Adrien Brody (in Midnight in Paris ) and Robert Pattinson (in Little Ashes ) keep a monopoly on one of the great visual artists and oddballs of the 20th century. If it means working his take on Dali into a musical about fairy tale characters, so be it. There’s room enough in these woods for plenty of melting clocks.

THE WEASELS FROM WHO FRAMED ROGER RABBIT

Perhaps Depp was hoping to get an early move on a biopic for the 41-year-old shock comic before anyone else got the chance to render his life and work on film. Sure, he hasn’t really done anything of note yet, but all in due time.

Remember this guy? He’s had a few Playstation games? You ran around Europe and looked for stolen treasures? No? Well, you didn’t really remember The Lone Ranger either and that didn’t stop Johnny.

SOME COMBINATION OF THE PRESTIGE AND THE ILLUSIONIST

Remember those two mediocre magician movies that came out within two months of each other in 2006? Johnny Depp does too, and he’s been aching to remake one of them! The problem is, just like with each of us, he has trouble remembering which was which… so he borrowed the costumes from one, the follicular grooming from the other, and kept the general air of mediocrity that coursed liberally through the pair.

The revolutionary won his due homage in the superhero political thriller V for Vendetta. But what about the man behind the mask, as that film itself asks? That’s the issue Depp is aiming to tackle… why he’s tackling it in Into the Woods is another, profoundly more perplexing question.

If there isn’t at least one scene of Johnny Depp attempting to tie a young woman to an active railroad track in this movie, then I have learned nothing from pop culture.

To be perfectly frank, he kind of looks like that in everyday life.