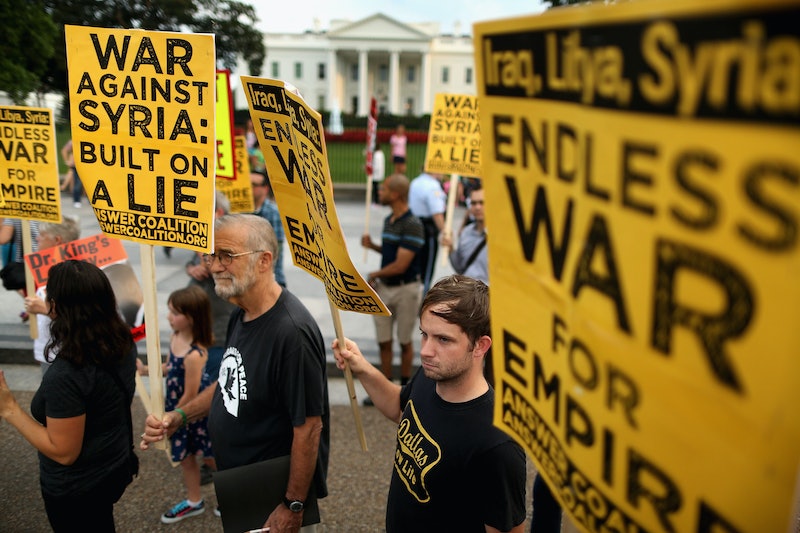 When President Obama announced that he would seek congressional authorization for a military strike in Syria, he tried to reframe the intervention not as a unilateral decision by the Commander in Chief, but as an intervention made collectively by all of the American people. However, a new poll out Tuesday suggests that this framing is a pretty big stretch, to put it lightly.

“I’ve long believed that our power is rooted not just in our military might, but in our example as a government of the people, by the people, and for the people,” Obama said last week. “I’m asking Congress to send a message to the world that we are ready to move forward together as one nation.”

And yet a Pew Research poll out today shows that popular support for U.S. military action in Syria is, well, not really there. Only 29 percent of Americans surveyed support American airstrikes in Syria, compared with 48 who oppose. That’s a pretty big deficit. If a politician with those sort of poll numbers claimed to have broad popular support, they’d be laughed out of office pretty quickly.

The reluctance instead seems to be rooted in what Americans see as the consequences of an intervention. For starters, only 33 percent of people think that retaliating against the Assad regime will actually discourage the use of chemical weapons in the future. In addition, 74 percent think that U.S. airstrikes in Syria will lead to a backlash against America and its allies, while 61 percent think it will lead to a long-term military commitment in the region (which is understandable, given the parallels of this situation to the build-up to the Iraq war).

If there’s any comfort for Obama in the new Pew numbers, it’s that a whole lot of people haven’t yet made up their minds about the conflict. Twenty-three percent of people surveyed said that they didn’t know whether or not they supported U.S. action in Syria; in theory, if all of those people ultimately came around and supported a strike, that would give the plan majority popular support. And given how rapidly the situation is changing—it was reported this morning, for example, that the Syrian government is in the process of moving troops to civilian areas — it’s not unlikely that public opinion could shift in favor of a U.S. intervention.

Still, this probably wasn’t the poll Obama wanted to wake up to days after proclaiming the nation’s unified support for a military intervention.

At a Senate Foreign Relations Committee hearing Tuesday, Secretary of State John Kerry echoed the Obama administration’s confidence that the Syrian government used chemical weapons, saying that the “the Assad regime — only, undeniably, the Assad regime — unleashed an outrageous chemical attack against its citizens.” When pressed as to whether there was any dissent or uncertainty within the intelligence community regarding this, Kerry claimed that, “I have no knowledge of any agency that was a dissenter, or anybody that had an alternative theory” regarding the regime’s use of chemical weapons.

The hearing was interrupted by a protester from Code Pink, who shouted that "we don't want another war." Kerry responded sympathetically, noting that when he testified in front of the same committee in the 70s regarding the Vietnam war, he "had feelings that were very similar to that protester."