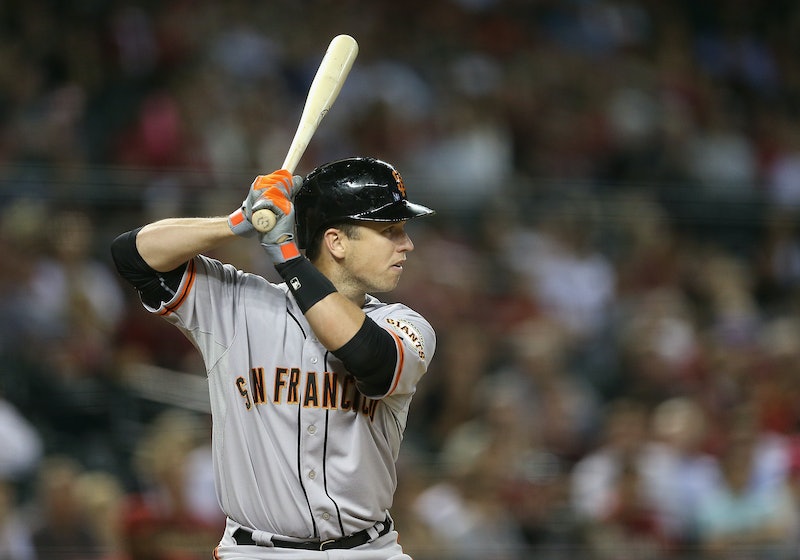 It's World Series time and you know what that means! That's right! People who like baseball still like baseball a lot and those who don't like baseball have to deal with it until it's over and everyone starts freaking out over football. In case you're interested, the San Francisco Giants are leading the series 1-0 after crushing the Kansas City Royals with a 7-1 win. The Giants are probably happy that, like Lorde, they'll never be Royals, but winning the first game does not a World Series Champion make. We've still got a few more games to see how this all plays out, and what kind of help San Fran's catcher Buster Posey will be in ensuring the success of the team.

Former Yankees manager Joe Torre thinks Posey could be the next Derek Jeter and it's not hard to see why. The 27-year-old Georgia native already has two World Series rings and an MVP award under his belt and Torre commends him on his leadership ability. But let's get a little more personal now: Is Buster Posey single or did someone already snatch this great, young player up?

According to FabWags, this rising star is taken and you are probably disappointed. Try not to be too disappointed though, because Posey's love life is basically a fairytale worthy of multiple World Series wins. Posey's wife Kristen Posey (neé Powell) met the baseball player in high school. They started dating in his junior year and then were married in 2009, only a few months after he was signed by the Giants in a first round pick. True love and a MLB contract? Sounds pretty great!

Not only has Posey been married for five years, he's also a daddy! And to add to the fairytale, they had twins! The Poseys welcomed Lee Dempsey and Addison Lynn to the world on Aug. 14, 2011. That means those babies are now three years old and have probably started tee-ball. Or at least they've probably started training for tee-ball.

When Posey was injured in 2011, he saw his break from baseball as a chance to be there for his growing family. In an interview with the San Francisco Chronicle, he said:

This is definitely the good thing to come out of this [injury]. Obviously, our kids aren’t going to remember that. It’s more for Kristen and more for myself to be able to share those first few weeks and months with them. Even though I wanted to be with the team, there’s no other way I would have been able to experience what I did with them. In a way, I’m thankful for that.

Aw, this is too much. The man broke his leg but still found a silver lining in being able to witness the first few month's of his twins' lives. Kristen Posey got herself a catch of a catcher if I've ever seen one. And a nine-year contract for $167 million doesn't hurt either, but what's over a hundred million when your professional baseball playing husband was your high school sweetheart? Damn, I bet it feels good to be a Posey.