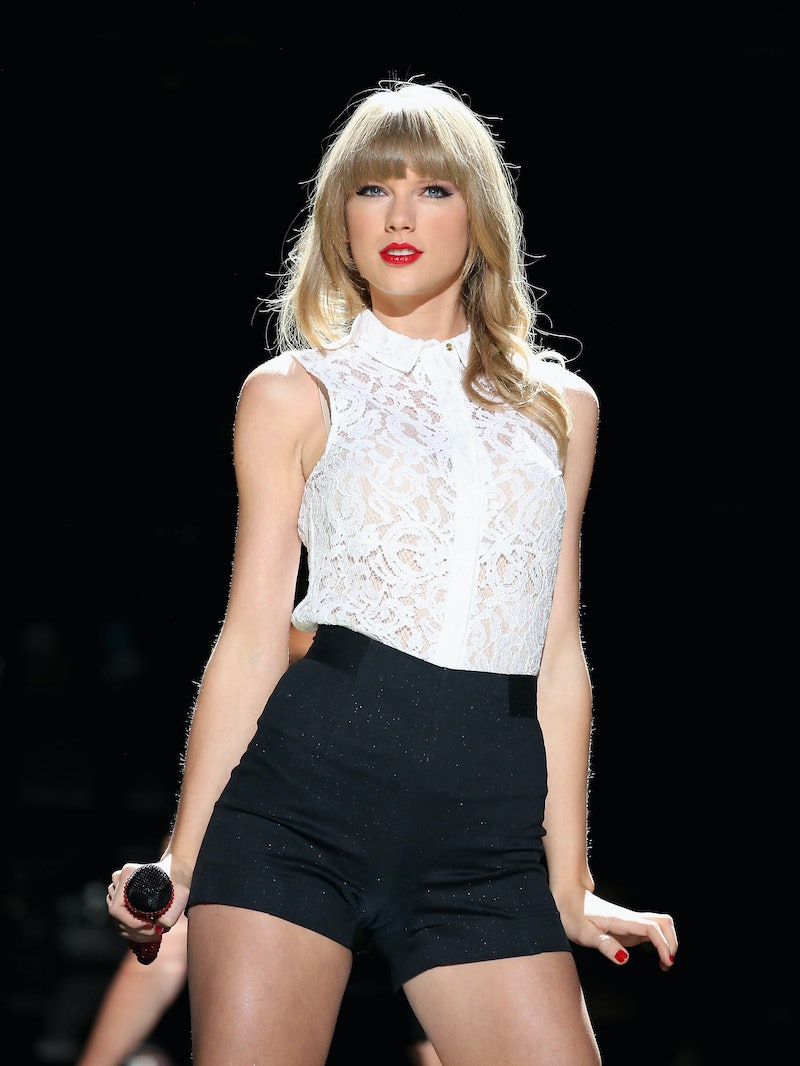 WOOOOO MORE NEW TAYLOR SWIFT (!!!!) — that was my reaction to seeing the new Target commercial for Taylor Swift's 1989 Deluxe Album. Because, I mean, I haven't stopped listening to the Swift's recently released "Welcome To New York" OR "Out Of The Woods" for that matter, so any 1989 news is enough to send me into a frenzy these days. On Wednesday morning Taylor Swift tweeted the link to the 1989 Target commercial and revealed that it "features a brand new song that you haven't heard yettttttt." That it does, that it does. In the commercial, Swift debuts "Style," the third track on 1989 and it might actually also be about Harry Styles.

I don't know about you (no, I'm not feeling 22), but I'm absolutely interested in who Taylor Swift writes her songs about. She always claims to be "a storyteller," after all, so I can't help but want to know the whole story she's trying to tell. And the lyrics and, frankly, this newly previewed song's title would appear to be major hints that "Style" is actually written about the man bun-rocking One Directioner. I mean, are you surprised? The singer hasn't dated anyone else in the past year and, I mean, he's Harry Styles. At the very least, he warrants at least three songs about their relationship based on man buns alone.

So, let's look at the evidence — but first, the song:

Exhibit A: The Title

I'll admit, it took me awhile to realize that "Style," while it pertains to what the song is about — a relationship that, while difficult, never "goes out of style." But, I mean, how could anyone NOT notice the convenient non-coincidence that is the fact that Harry STYLEs is T Swift's ex? And it's no secret that Swift thought Styles was trouble, trouble, trouble. I mean, c'mon.

Exhibit B: "Long Hair, Slicked Back"

Long hair? Check. Slicked back? Check. But if that's not enough to convince you...

That's a white t-shirt on Harry Styles. Sure, a lot of guys where white tees, but not a lot of guys have dated T Swift in recent history. It fits the bill.

Exhibit D: "And I've got that good girl faith and a tight, little skirt"

Obviously we all know this lyric is about Swift — the girl's a huge fan of "tight, little skirts" these days. There were also rumors floating around that Harry Styles dumped T Swift because she was a goody two shoes.

"Style" is absolutely another song about T Swift's relationship with the One Direction star. The proof is in the pudding or, rather, simply in the title of her latest 1989 tease. But, much like "Out Of The Woods" it seems like Swift's taken a new approach to break-up songs, "Style" doesn't sound like a pointing-fingers kind of jam at all.