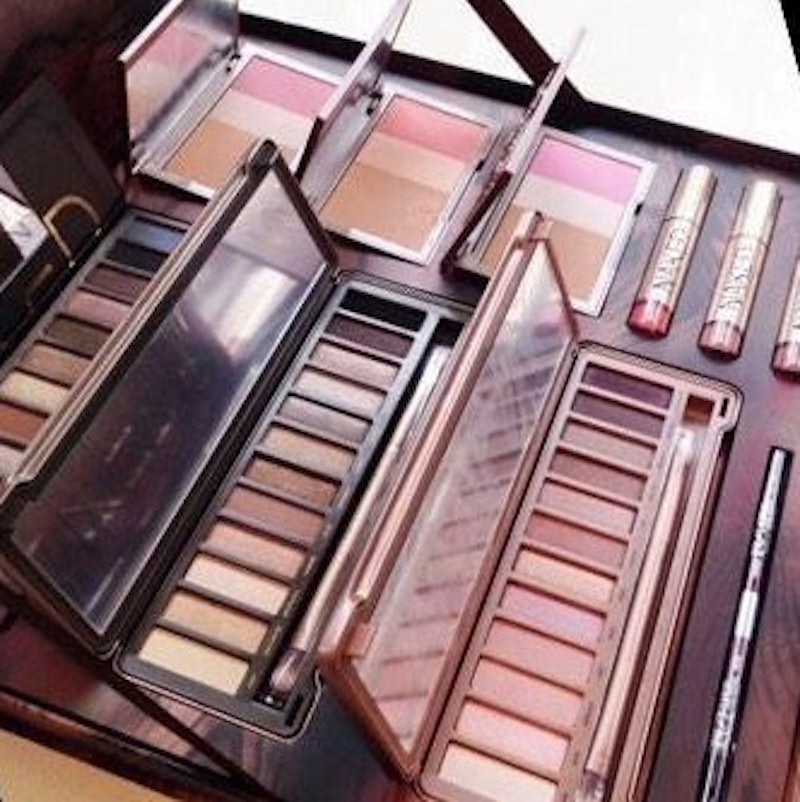 Urban Decay Fans, rejoice: the Naked Vault is a real thing. The set includes all of the Naked palettes and products all in one place, and it is just as amazing as it sounds. There's a catch, though: for now, the mother lode of beauty products is only being released in the UK. *sobs*

As a diehard Urban Decay fan, though, I have found a potential loophole. Two words: international delivery. The Naked Vault will be released exclusively on UK retailer Selfridges' website on November 1, and according to the site, almost everything on it can be shipped to the states. It'll cost ya, though: not only is the palette priced at a whopping £180 (translation: nearly $290,) but shipping to the U.S. will run you an extra £25 (about $40.) In case you're mathematically challenged like me (I literally almost used a calculator for this,) that's $330. *sobs again*

If there's any way I'm getting my hands on this bad boy, it's under the Christmas tree. I mean, I've been good this year, but I don't know if I've been that good. (Again, really sorry about that time I ate my roommate's Nutella, Santa.) Maybe time for a game of "Which Set Of Grandparents Love Me the Most"? Because I am borderline desperate for the Naked Vault, as I'm sure the majority of the makeup-loving female population is as well.

The waiting list for it will probably rival the iPhone 6's, and take it from someone who's been impatiently waiting for that device for a month and a half now — the waiting game is the worst. So maybe it's for the best that I'd need to shell out some serious moola to get it.

If you're planning on dropping the cash or making a heartfelt plea on your holiday wish list, I wish you the very best of luck. Because this thing is, in a word, spectacular.

More like this
35 Ideas For 4th Of July Nails That Go Beyond Red, White, & Blue
By Audrey Noble
11 Fresh Fragrances Perfect For Summer
By Paris Giles
4 Game-Changing Makeup Hacks For Oily Eyelids
By Hilary Shepherd
21 Makeup Artist-Approved Lipstick Colors For Summer 2022
By Olivia Rose Ferreiro
Get Even More From Bustle — Sign Up For The Newsletter