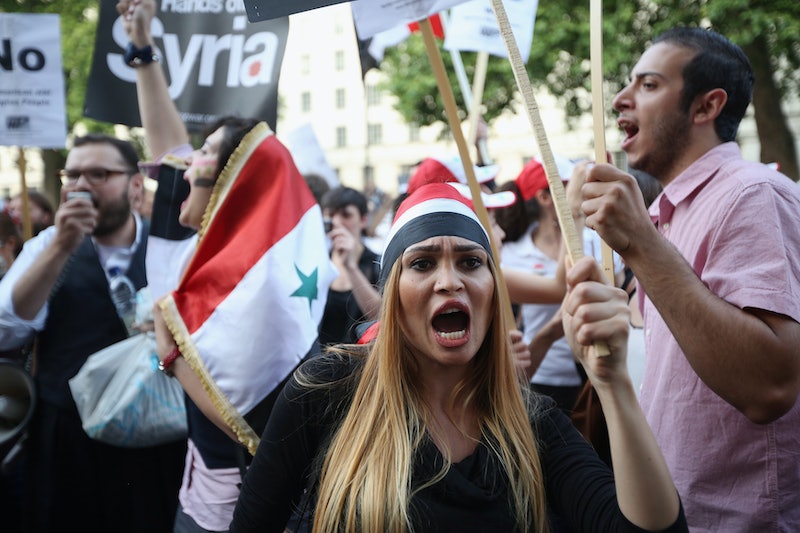 In case you missed it, John Kerry became the latest person this week to compare what's happening in Syria right now to a genocide — specifically, the Holocaust:

It's not a question of what will happen if we don't do it; it's a certainty. Are you going to be comfortable if Assad, as a result of the United States not doing anything, then gasses his people yet again, and the world says, "Why didn't the United States act?" History is full of opportunity of moments where someone didn't stand up and act when it made a difference. And whether you go back to World War II or you look at a ship that was turned away from the coast of Florida and everybody on it lost their lives subsequently to German gas, those are the things that make a difference. And that's what's at stake here.

Kerry isn't the first to make that comparison. This April, in an op-ed for the Washington Post, Anne-Marie Slaughter — a Princeton political scientist-turned-household name through her writings on women and work-life balance — became one of the most high-profile voices to call the Syrian civil war a genocide. It wasn’t Slaughter’s first piece on the subject, but labeling the slaughter of hundreds of thousands of Syrians with the G-word gave it a renewed sense of urgency.

More then two years and two million refugees in, the question of genocide hangs over most discussions of Bashar al-Assad’s use of chemical weapons against Syrian civilians. After all, we’d messed up before. (Former President Bill Clinton freely admits that inaction during the Rwandan genocide is one of his biggest regrets.)

That’s why Syria is, in some ways, tempting politically. It’s a chance for Democrats to show that they, too, are strong on foreign policy, that they can be hawkish, and make the tough decisions — with congressional approval, to boot. It’s a chance to show that we are living up to the motto of “Never Again” and are taking proactive steps to prevent the slaughter of thousands.

But Syria isn’t like Rwanda, or Saddam gassing the Kurds, or the Holocaust. It’s just another example of the fact that, 12 years into our most recent wars in the region, our understanding of the Middle East is still very poor.

Bashar al-Assad is not a good man. He’s a tyrant, and considering that one of President Barack Obama’s chief reasons for calling for American intervention in Syria is evidence that he gassed his own people with chemical weapons, he’s a leader the world would do well to be rid of.

This civil war, however, is not genocide.

A genocide has to be a concentrated desire to wipe out an entire group of people — according to the United Nations, “a national, ethnical, racial or religious group.” Bashar al-Assad wants to wipe out a group, that’s for sure, but it’s not a group that fits into any one of those discrete categories, though it partially overlaps with some. Assad wants to wipe out everyone who disagrees with him.

From the start, some media outlets have been reporting a more nuanced portrayal of the situation. Writing for the Atlantic, Paul Wood reported that it’s not as simple as the Alawites — a privileged, well-off Shia sect of which Assad is a member — trying to eliminate the Sunnis. (The Sunnis are a majority of Syria’s population, anyway; to eliminate them all would be a nearly impossible task.) The army, which has stood by Assad, is majority Sunni, and from the start, some Alawites have been advocates for the opposition.

Rashid Khalidi, a professor studying the modern Middle East at Columbia University, told Bustle that this fact is rarely portrayed by the media.

“It’s a conflict that some people see as being entirely sectarian, it has a sectarian element for sure,” Khalidi said. At the same time, economics and social class have an equally profound impact. "This is is a regime that's benefited the upper classes of Syria," he says, regardless of religious school. Well-off Sunnis have little reason to try to depose Assad.

According to Khalidi, many of the sectarian elements are actually being injected from abroad, from other countries of the Gulf like Saudi Arabia or from Shia elements like Iran or Lebanon’s Hezbollah. Consequently, many of the fighters coming in from abroad denounce those on the other side as “takfir” — apostates.

Some of the fighters, both within and outside the al-Nusra front, have pledged allegiance to al Qaeda and other groups so extreme that they were driven out of the Arabian Peninsula — their understanding of what the government must be like leaves no room even for the Saudi State.

What brews underneath, it seems, is a rather un-Syrian Holy War, and it bears little resemblance to the initial uprising. The original elements of the Syrian uprising are less and less visible. Instead, the rebel-controlled areas are dominated by fighters from outside Syria, Khalidi says.

In his mind, there are only two options for what the United States can do: back one side of the conflict, or help negotiate a settlement. The middle option, he says, "is not a real option."

Because we don't know who we're arming, or what they want, Khalidi thinks a negotiated settlement is what the United States should be pushing for, despite the fact that the result will almost certainly be “horrible, objectionable people" in power or sharing power.

“The slaughter of another 100,000 Syrians is probably not worth [the alternative],” he says. “If the side that we’re backing wins, God knows who they’ll end up being.”

On the other side, though, there remain convincing reasons for intervention far stronger than Slaughter's loose use of the word "genocide."

In The New Republic last week, John B. Judis argued that the mere use of chemical weapons by Assad's government meant that he intended them to be "weapons of terror," and that he should be punished, swiftly and pointedly, for violating international norms.

Another convincing — and profoundly terrifying — argument was made by Foreign Policy’s Dennis Ross in April: When a state like Syria disintegrates, its chemical weapons are up for grabs, and they won't only be used against rebelling internal groups. Perhaps that’s reason alone to intervene. Perhaps the only thing worse than a madman dictator with the power to gas thousands is those weapons falling into the hands of a stateless terrorist organization.

If we do intervene Syria, for whatever reason, let's at least be honest: any action we take might just result in more blood on our hands.