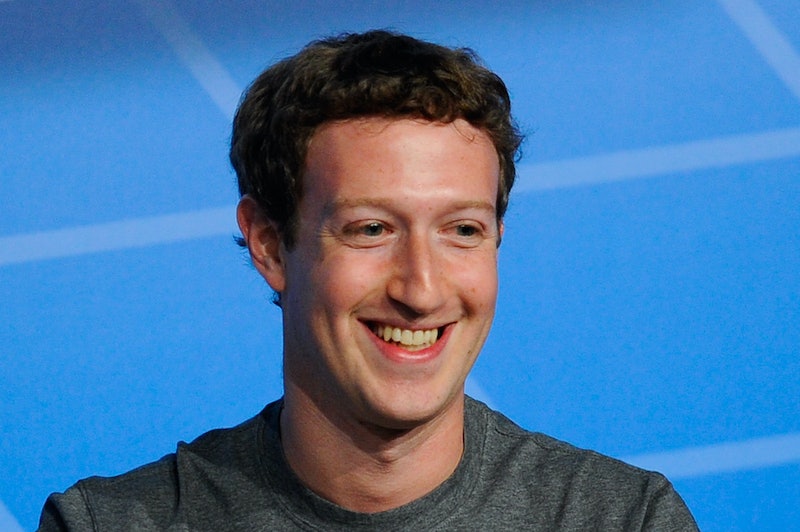 The 30-year-old Facebook CEO is generally regarded as an ingenious and talented young man. Mandarin Chinese is generally regarded as one of the most difficult languages to learn. But leave it to Mark Zuckerberg to speak Mandarin fluently, surprising Chinese students at Tsinghua University in Beijing on Wednesday. Zuckerberg conducted the nearly 30-minute question and answer session completely in Mandarin, and we're not talking about "Hi, how are you? Which way to the toilet?" Zuckerberg talked about Chinese innovators, gave advice on how to create a start-up, and bringing Facebook to China. All in Mandarin.

The ever-modest Zuckerberg opened his Q&A session with "My Chinese is really terrible, but I wanted to try." OK, first of all — the fact that you could say that in Chinese is already impressive. When students asked Zuckerberg why he decided to take on such a challenging language, he said he had three reasons. The first was right in front of him.

The second was that he really loves Chinese culture. The third? He loves a good challenge. Sounds like typical Zuckerberg. The tech honcho posted a video of the Q&A session on Facebook, in which you can see the multilingual man in action. Though his accent may be heavy, he speaks the language with relative ease. Somebody add his picture to the dictionary entry for "virtuoso," please.

His Words of Advice For Tsinghua's Students (In Mandarin)

Zuckerberg started by complimenting the student body at Tsinghua University, which is known as the "MIT of China," noting that some have become part of his team.

I think the students at Tsinghua University are very good. Facebook has over 140 alumni from Tsinghua. Every year we come to China to hire from the best cities. Last month, we hired 20 Chinese students.

He also gave the students advice on starting their own tech companies, encouraging them to follow their dreams.

He Talks About Bringing Facebook to China (In Mandarin)

Facebook is banned in China, where the government heavily censors the Internet, but Zuckerberg talked about how the social network still has a presence in the country.

He Talks About His Mandarin (In Mandarin)

Zuckerberg told the students that his wife, Priscilla, will sometimes offer critiques of his Mandarin. When the students asked if his Chinese was better than hers, he said that he had a "listening problem."

Why Mandarin Chinese Is So Difficult to Learn

So why is it so impressive that Zuckerberg conducted his entire Q&A session in Chinese? Many people are bilingual. Well, Mandarin Chinese is unlike most other languages for several reasons. While English has a set alphabet of 26 letters to learn, memorize, and use repeatedly, there are over 80,000 Chinese characters, and in order to be fluent you need to memorize at least 3,500.

Secondly, the characters themselves are much more complex than letters from the Roman alphabet. Each character is made up of several strokes (the most complex one has 58!), and if you want to write them properly, you must follow a specific order.Third, the Chinese language is not phonetic, meaning there is no symbol that represents a specific sound. Basically, you just have to remember what each character sounds like and means. Oh, and speaking of sounds, each main sound has four tones, each one denoting a completely different meaning. (That is, by the way, where Zuckerberg needs the most work.) And did I mention that Mandarin Chinese alone has hundreds of dialects?Images: Getty Images (4)