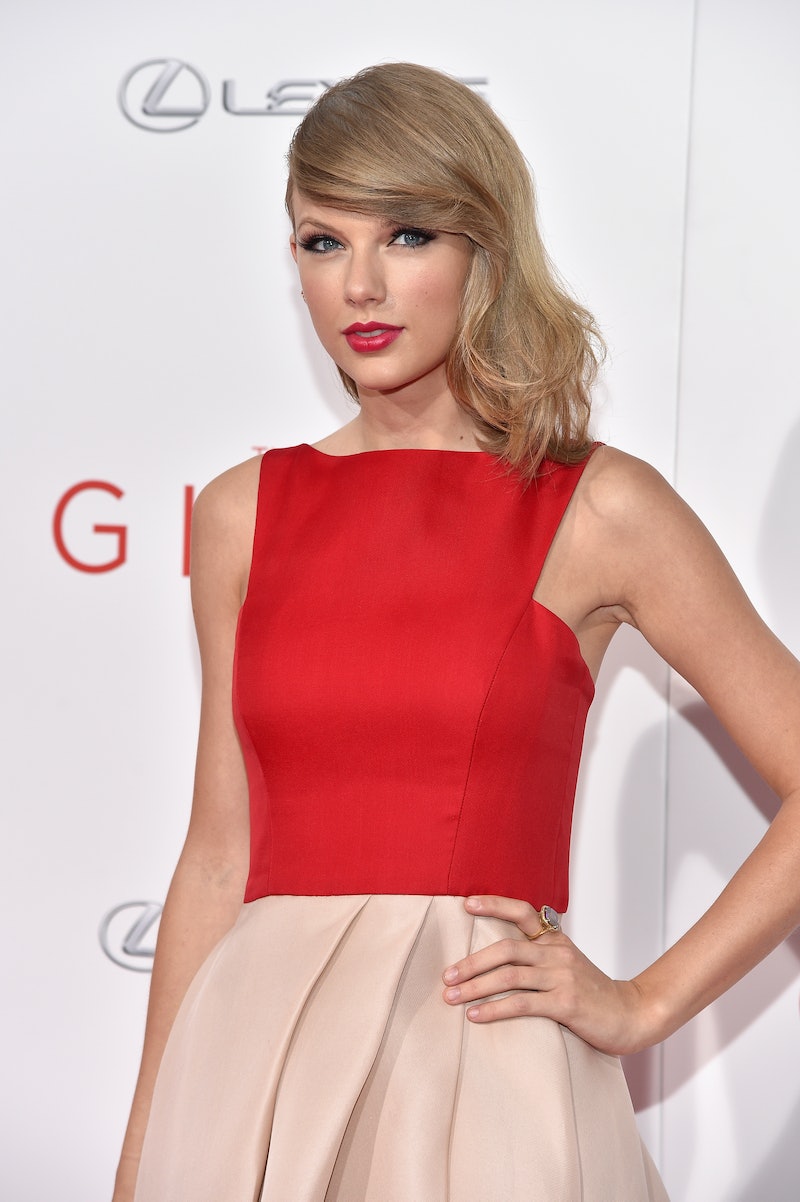 It's hard to imagine Taylor Swift as an "outsider." I mean, she's got at least a million celebrity friends that include the magical Lorde, supermodel Karlie Kloss, and Girls' Lena Dunham. And, of course, she's my imaginary celebrity BFF (praise). AND, on top of that, Swift's "Welcome To New York" is a legitimate anthem for legions of fans. That doesn't really sound like an outsider to me but, apparently, the "Shake It Off" singer is a wiz at being on the outside-looking-in. In The New York Times' review of Swift's upcoming album, the publication claims that in 1989, Swift continues to paint her as an outsider in the pop music scene. If so, that's nothing new. While Swift's been the best imaginary BFF of all time, she's actually been singing about being an outsider for, like, ever.

The Times' review of Swift's '80s-inspired foray into pop music with 1989 says: "That choice allows her to stake out popular turf without having to keep up with the latest microtrends, and without being accused of cultural appropriation." Which is something, the write up states, that sets her apart from the Katys and Mileys of the pop scene who are relying heavily on hip-hop and R&B to stay mainstream these days. "Modern pop stars — white pop stars, that is — mainly get there by emulating black music," after assuring that Swift's 1989 has nothing in common with them.

But, while none of us are surprised that Swift's gone full-on-pop with 1989 (it's been a long time coming, people), we also shouldn't be surprised that the singer's staying out of the mainstream fold. Because, while she's got a million friends IRL, some of Swift's most popular songs throw digs at or reveal that she's an outsider at heart. And maybe always will be.

"Who's Taylor Swift anyway, ew?" Do you actually mean to tell me that you don't know who Taylor Swift is? C'mon. But on a more serious note, that could be a major hint at what Swift actually feels about her glamorous Hollywood life.

In this song off of the singer's Speak Now album, Swift sings about standing on the sidelines and wishing for "this moment" to happen. Who stands on sidelines? Outsiders.

The unrequited love anthem that Gordo needed all those years ago on Lizzie McGuire. Swift's 2008 song was all about being on the outside of the "cool crowd" and looking in on her male BFF's relationship with a cool but terrible cheerleader.

Swift actually says straight-up in this video that she wrote this song about feeling like an "outcast" at school. The lyrics to this song are actually unbelievably sad — considering they were written by a 12-year-old.

If the title doesn't give it away, this early Swift song is about "a girl trying to find a place in this world." Which would imply that said girl is an outsider that doesn't feel like she fits in anywhere. Early T Swift was some bleak business.