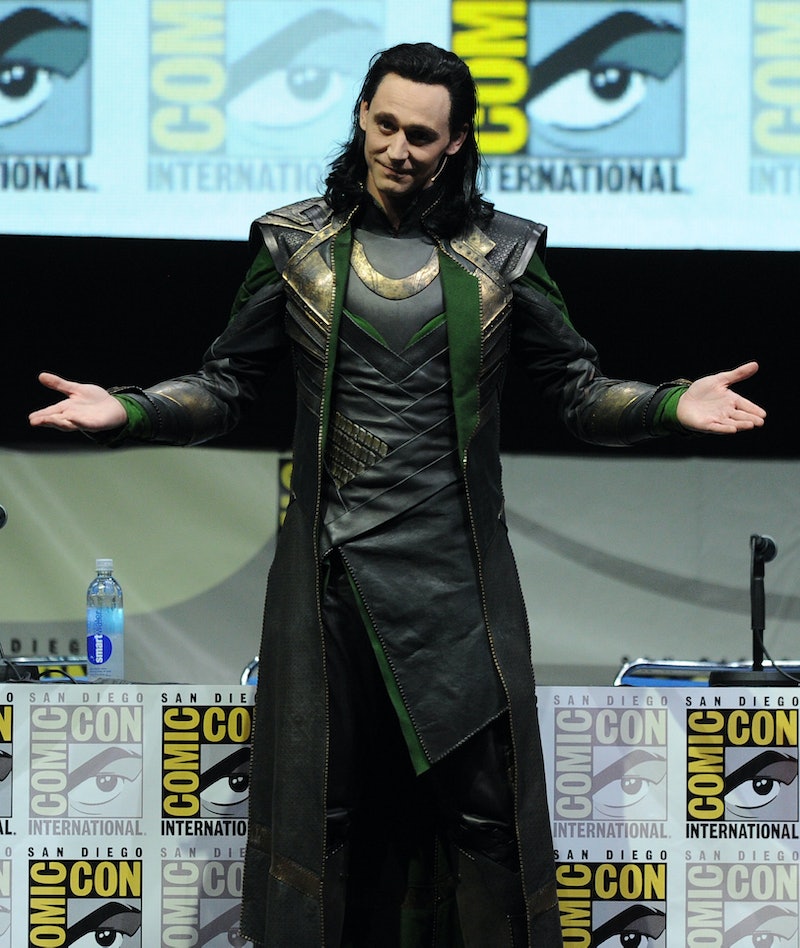 Someone who works at Marvel was smiling down upon us this week and didn't force us to wait until next Tuesday after the next episode of Marvel's Agents of S.H.I.E.L.D. to get the official Avengers: Age of Ultron trailer. It leaked on Wednesday and people have talked about very little else since because, well, why would they? It was amazing. It was beyond amazing. It was epic. It was also missing something. And not just a better creepy theme than "I've Got No Strings" from Pinocchio, but something glaringly important. Is Tom Hiddleston as Loki going to appear in Age of Ultron? From the trailer, it would appear that the answer is no.

To be fair, he has already answered this question. In an interview with Entertainment Weekly in 2013, Hiddleston confirmed that Loki was out of the then-untitled film. "Here’s the thing: I don’t think there’s anything else Loki could contribute to The Avengers, narratively. Joss gave me so many wonderful things to do in that first film that we’d only be trying to repeat ourselves, and probably less well in the second one."

However, the thing is, Hiddleston gave this interview before Thor: The Dark World came out, so there was still a chance that he was just pulling our legs. I mean, what could Loki possibly get up with in The Dark World that would prevent him from making a special guest appearance in The Avengers 2? Who says that he has to be the villain again? Maybe he's in a bonus scene or maybe he gives Thor some unexpected help or maybe Thor decides to go home and make amends with him after the events of Age of Ultron. I'm not picky, if it gets me more Hiddleston.

However, Thor: The Dark World was a gamechanger for Loki in particular. It would be kind of awkward for him to pop up in Age of Ultron considering the fact that Thor thinks he's dead. As we all know, The Dark World featured Loki and Thor actually working together to save the world for once, but at the climax Loki is fatally wounded in battle. He dies in Thor's arms and Thor later tells their father, Odin, that Loki died a hero... unaware that the Odin he just confessed to was actually a very much alive Loki in disguise. Presumably, during the events of Age of Ultron, Loki is still in Asgard impersonating Odin for a nefarious scheme we'll only discover the details of by watching Thor 3.

If Loki were to show up in Age of Ultron, then the entire plot would be derailed by Thor, who would obviously be shocked and appalled to see that his brother is still alive and to realize that he had been tricked. His quest to find out how Loki tricked him and what Loki wants now would draw attention away from Ultron and split up the Avengers at a critical point that, quite frankly, the film wouldn't have the runtime to adequately explore. Which means that the only way we'll get our Loki fix in Avengers 2 is if Thor talks about him or if Loki appears in the post-credits scene in some capacity. Regardless, it seems Hiddleston won't be the actual movie itself.

In addition, there's the fact that if the Avengers see Loki again then they're probably going to kill him for good this time. After what he did to New York and, you know, around the world, it was only out of respect that the team let Thor take him back to Asgard to face his punishment there. If Loki were to show up in the Avengers' world again, they would probably take it as a sign that Thor's brand of justice had failed and it was time to put his (adopted) brother down for good. While that would also make for an equally entertaining movie, it's still not something they can fit in with Age of Ultron's plot. For now, we'll just have to keep our fingers crossed that they find a place for Hiddleston in the Avengers 3 or in the post-credit scene because the world always needs more Loki.