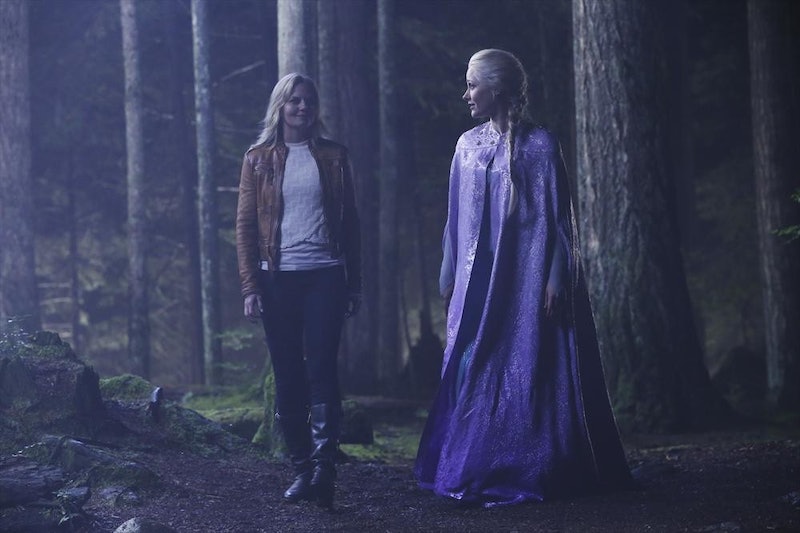 When it comes to Frozen on Once Upon a Time this season, one thing's for sure: the show does not want to let it go. Big news came in for the hit fairytale drama on Thursday, as co-creator Adam Horowitz announced that we're getting a super-sized episode on Nov. 16 (airing at its usual time of 8 p.m. ET). OUAT

will have a two-hour installment for Season 4, Episode 8, which means they're jam-packing even more Frozen storylines in before the midseason finale.

Season 4 of Once will be split into two distinct parts, just like how Neverland was a big arc last season before everyone headed back to Storybrooke. This season, we have no clue what's happening in Season 4B, but the first part has centered around Elsa's search for her sister, Anna, and her fight against her supposed aunt, the Snow Queen, in present-day, while flashbacks show Anna, Kristoff, Sven, and Elsa, dealing with a wedding and some other family drama. (Sadly, Olaf is not coming into play at all this season.)

Since the two-hour episode isn't set for the midseason finale — which will likely be around Episode 11, as the season is 22 episodes long — I think the climax of the Frozen storyline will be earlier on. With a longer Episode 8, that could mean we'll see Anna return, the Snow Queen reveal her ties to Emma, or Regina find the author of the fairytale book. The latter is the least likely, since Horowitz and other co-creator Eddy Kitsis said that storyline will last throughout both parts of Season 4.

However, since that episode is titled "Smash the Mirror," it could be about Sidney Glass (a.k.a. the Magic Mirror) turning on Regina and her being in Evil Queen mode. Jussayin'. Either way, I'm just excited for more Once Upon a Time.