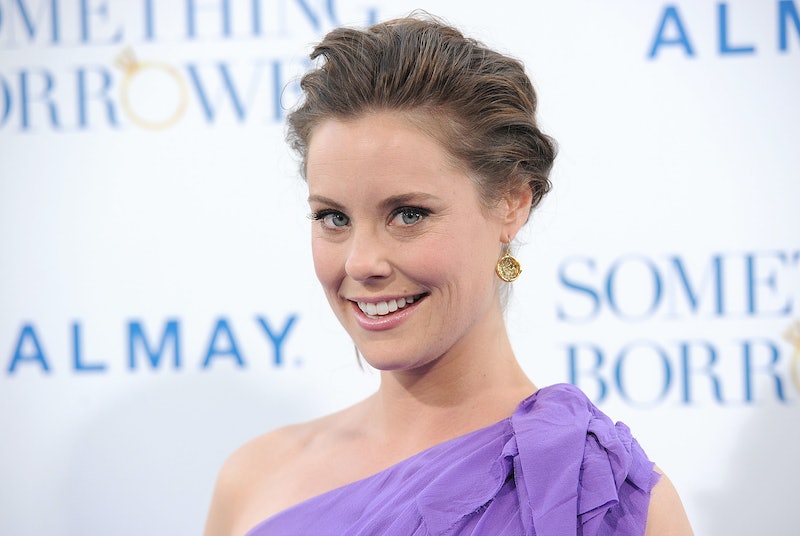 She might be best known for starring in Something Borrowed and How I Met Your Mother, and also being the younger sister of Kimberly Williams-Paisley (meaning, she's also Brad Paisley's sister-in-law), but now Ashley Williams is going to be known as a new mom with her hubby Neal Dodson. That's right, on Sunday, Oct. 5, Ashley Williams gave birth to a sweet baby boy named Gus! First reported by People, Gus Williams Dodson weighed 8 lbs., 8 oz. and measured 20 and a half inches long.

You can tell Williams is totally in love, as she gushed about her son, "He’s gorgeous and healthy. So far he’s soothable and calm. Knock on wood!" Her birth wasn't a "normal" one, as she didn't give birth to Gus in a hospital, but rather surrounded by midwives, a doula, and a chiropractor. Fun fact: Williams is also a certified doula! During the birth, Williams said, "We felt so safe and so lucky to have had such incredible support." They even listened to some tunes, and Gus was born to an Alexi Murdoch song.

So, where did the happy couple come up with the name Gus? She explained, "His name is Gus. For no other reason than: Who doesn’t love a guy named Gus?"

I have to agree with Williams. I don't know about you, but when I hear the name Gus I think of Cinderella and the adorable, chubby mouse. If Williams' baby boy is anything like this mouse, who I just want to love and squeeze to pieces, then she is one lucky mama.

Let's give Williams and her hubby a big congrats on their newest addition!