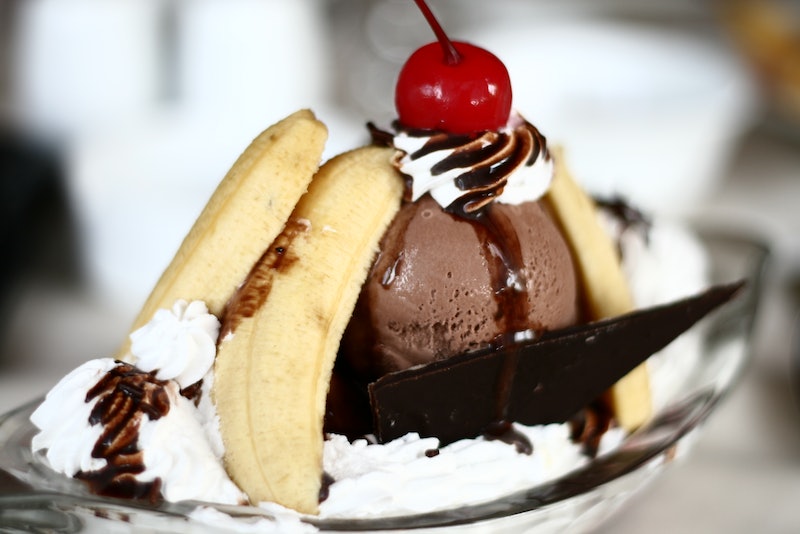 Regardless as to whether you liked The Fault in Our Stars, it’s kind of hard not to like John Green. Case in point: His glorious presentation of “29 Dumb Facts About Dessert” for Mental Floss. It’s exactly what it sounds like — one of the most likeable dudes around regaling you with all sorts of trivia about all your favorite sweet treats — and yes, it is magical. Wonderfully, deliciously magical.

The video is the most recent installment of Mental Floss’ “The List Show,” a web series aimed at people who adore random trivia — that is, me. Seriously, you guys. It’s like they knew I was coming. Anyhoo, anyone who’s familiar with the Vlogbrothers YouTube channel, which Green runs with his brother Hank, won’t be surprised to see the author gracing our screens with his presence; what I always find remarkable, though, is his ability to segue between two totally unrelated topics with the greatest of ease. It’s quite an impressive talent.

Scroll down to watch all 29 facts for yourself — they’re a blast, so I highly recommend doing it—but, if you happen to be in a position where video-watching would be frowned upon at present, A) I am sad for you, but B) I have a solution for you. Here are some of my favorite tidbits:

Popsicles Were Invented by an 11-Year-Old.

His name was Frank Epperson, and he was from Oakland, CA. He patented the idea of “frozen ice on a stick” in 1924, calling it the “Epsicle.”

What’s so whirlpool-like about a strudel? Maybe it has something to do with how twisty it looks on the inside. In any event, the German pastry dates back to 1696; you can find the oldest recipes we have for them in the Vienna City Library.

Or Chicago. We actually have writings from a 5th century Greek physician about how to make awesome cheesecake. Who knew it was so ancient?

And yes, that image right there is the one displayed in the video when the subject of bear claws is first broached. They were invented in the western U.S.; the first printed reference to one occurred in a 1942 newspaper article in San Francisco.

The Origins of the Banana Split Are More Confusing Than You Know.

Two towns claim to have invented it in the early 20th century: Latrobe, PA and Wilmington, OH. Both of them, however, chalk the sundae’s popularity up to college students. Drunk food through the ages, perhaps?

The World’s Biggest Gingerbread House Was Probably Bigger Than Your Actual House.

“Éclair” Comes from the French Word for “Lightning.”

And no, no one knows why that is. Thanks, John. Now not knowing why eclairs are so lightning-like will bother me until the end of time.

We Can Thank the Girl Scouts for the Widespread Popularity of S’mores.

The first time a recipe for the campfire treat was ever printed, it appeared in the 1925 edition of the Girl Scout Handbook.

Cotton Candy Was Invented by a Dentist.

Seriously. A dentist. Methinks the dentist who wants to buy back kids’ Halloween candy this year might want to have a few words with the one who popularized tooth-killing spun sugar if he could, no?

Fun, right? Watch the whole thing below, and catch more episodes of “The List Show” on Mental Floss’ YouTube channel. Now if you’ll excuse me, I have a lemon bar sitting in my fridge that’s calling my name…