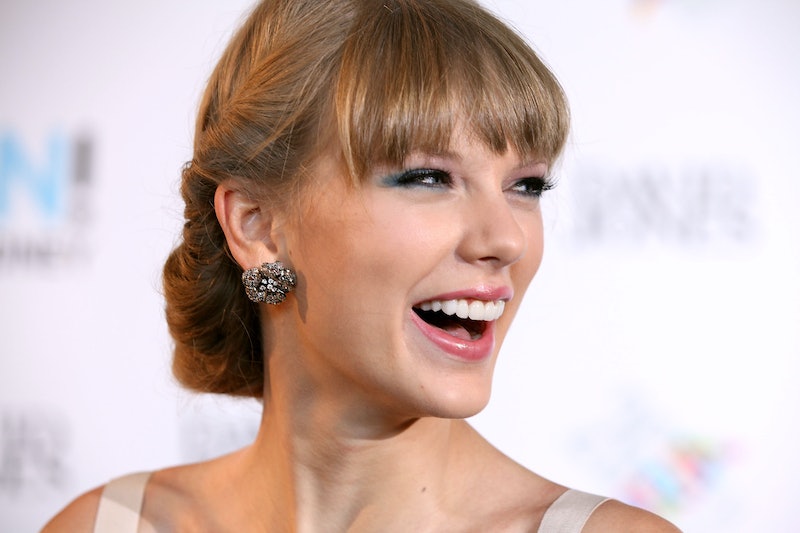 With the release of her highly anticipated new album only four days away, everybody wants to know: Will Taylor Swift's 1989 sell over a million copies in its first week? It's a great question. After all, she's done it twice before. In 2010, Swift's Speak Now sold 1.1 million copies in its debut week. She did it again in 2012 with her last album, Red, which shifted an impressive 1.2 million copies upon opening (the best opening week in a decade). So, will Swift be able to pull off a three-peat? To be perfectly honest, no, I don't think so (and as a huge fan, it pains me to write that) — but there are a couple of small glimmers of hope. Let me explain:

According to Billboard, even though 1989 (out Oct. 27) was initially predicted to sell around 1.1 million copies in its first week, prognosticators have reduced that number to 750,000 "after other titles in the quarter fell short." In other words: Album sales are beyond terrible right now (but you probably already knew that). The New York Times reports that album sales in 2014 "are down 14 percent from the same period last year." Ouch. Further, as music website Hits Daily Double explains, listening habits have begun to shift from purchasing and downloading (iTunes, Amazon MP3, Google Play, etc.) to streaming (Spotify, Beats Music, Rhapsody, etc.) in the two years since Red was released. This shift could absolutely impact Swift's numbers.

You also have to consider the fact that 1989 is Swift's first pop album after carving out a wildly successful career primarily making country music. Though The New York Times points out that "little outright negativity" has been expressed by the Nashville music scene over Swift's genre change (publicly, anyway), 1989's lead single, "Shake It Off," was still "largely ignored" by country radio stations. Without support from country radio (and thus, country fans), I think that 1989 is going to have a really tough time selling over a million copies in its first week. It's certainly not impossible, but it just doesn't seem probable at this point.

However, there are a couple of good reasons to believe that Swift could make this thing happen. After all, when Red's pop-leaning lead single, "We Are Never Ever Getting Back Together," was released, some people declared that Swift would never ever sell over a million copies in her first week again — not after "betraying" her hardcore country fans. But, of course, she did. Additionally, according to Hits Daily Double, "Shake It Off" has performed similarly to "We Are Never Ever Getting Back Together" (both songs went No. 1 and sold over three million copies before their respective albums' release dates), which could potentially be a sign of good things to come.

So, no, I'm not at all expecting 1989 to sell over a million copies in its first week — but I'd love to be proven wrong. Needless to say, I'll definitely be keeping my fingers crossed.