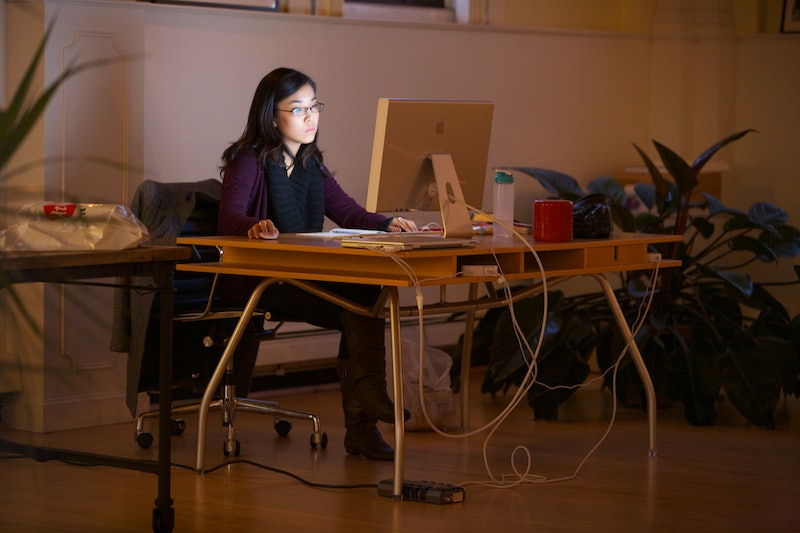 For the vast majority of us with desk jobs, the most movement we make all day is with our eyes and fingers. But imagine working at a computer and moving your entire body to navigate the screen. Dutch design student Govert Flint designed the Dynamic Chair, a full-body computer mouse that requires you to move actual limbs to communicate with the computer. It may sound like an unnecessarily laborious invention, but given how sedentary our society has become — and the associate health risks that come with that — the Dynamic Chair might be exactly what we need.

Flint created the Dynamic Chair, which is currently in its prototype phase, to address a society so used to being inactive at work that we have to go to a separate, specific facility just to move around. He told Wired:

Western society is so over-organized. I found it odd that we create tech that’s so efficient that it takes over psychical efforts, so we go to fitness centers to create the movements.

The Dynamic Chair would certainly challenge our sedentary habits, and the way it's designed, it doesn't just encourage us to move more, but it also influences how we move. According to Flint, the mechanism was designed with ballet in mind. When creating the chair, he studied dancers at the Scapino Ballet Rotterdam and spoke with a ballet physiologist, who pointed out that human hips aren't meant to stay still in a chair. Based on these dancers' movements, Flint envisions similarly fluid movements when conducting the Dynamic Chair.

Take a look at the chair, which will be on display at Dutch Design Week from October 18 to 26, in action.

So How Exactly Does It Work?

After strapping into the chair's steel frame, you can make several commands based on your body's movements. Moving your torso up, down, left, or right will move the cursor around the computer screen. Similarly, you can scroll through the screen using your hip rotations. And right and left clicks of the mouse are executed with a kick of your right or left leg. Sensors in the seat will detect your movement and send a signal to three accelerometers, which then translates the command into activity on the screen.

Currently, the commands movements are confined to the lower body, since hands and arms need to be free for typing, but Flint hopes to involve those limbs too in future iterations.

Why We Need the Dynamic Chair

Numerous studies have shown that people who led more sedentary lifestyles were more likely to experience cardiovascular disease, obesity, and type 2 diabetes. According to a 2011 NPR report, researchers discovered that even if you exercise regularly, it may not be enough to undo the damage caused by sitting all day long. Experts say that interrupting inactivity with even the simplest movements throughout the day can make a major difference. With the Dynamic Chair, a sedentary work life would essentially become a thing of the past.

Besides the obvious health benefits, Flint believes that engaging your body more regularly throughout the day would also "integrate happiness in daily life."

What Does It Look Like to Use One Anyway?

So by now you're probably wondering what using your whole body as a mouse looks like exactly. Well, admittedly, it looks a little silly. It's a little like doing interpretative dance in an upright, seated position. (But it's natural that something this revolutionary will take some getting used to.) Take a look for yourself.