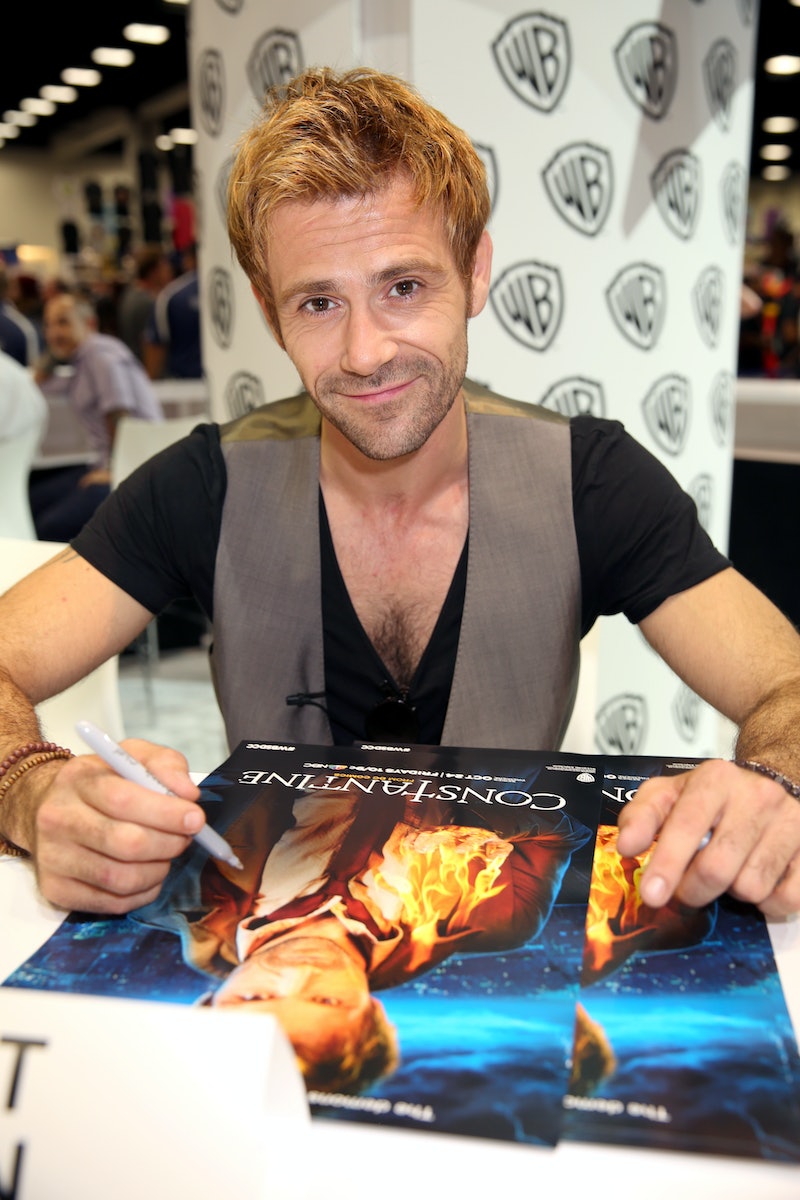 The buzz for NBC's first foray into television's growing comic book world has only been growing, but Constantine is not your average superhero TV show — and Constantine's lead actor Matt Ryan is not your average star (he's also not the Atlanta Falcons' star quarterback with the same name). Ryan plays John Constantine, lead character of the Hellblazer comics and a cynical, ruthless, and snarky guy who will fit in perfectly with today's TV antiheroes. He's an exorcist, occult detective, and con man wrapped into one blue-eyed trench-coated heartthrob, and at the end he's still got a heart of gold. He is, after all, trying to do something good and protect the world from supernatural threats. There's fire shooting out of hands, black liquid spilling out of eyes, and a whole lot of British wit. But where did NBC find the man to fill that trench coat?

The stage, as it were. Ryan is a Welsh actor who has been working for years. He joined the Royal Shakespeare Company in 2004 and has had roles in films like Miss Pettigrew Lives for a Day and Armistice. But where you may recognize his from is the small screen: Ryan had a guest role on Criminal Minds as Mick Rawson, and was then picked up as one of the leads for the spin-off show Criminal Minds: Suspect Behavior. And there's a lot more to Ryan than his resume:

A BEARD ALMOST KEPT HIM FROM GETTING CONSTANTINE

Ryan was doing the Shakespeare play Henry V in London with Jude Law when he auditioned for the role of John Constantine, and even though most producers loved him they had trouble looking past the beard — which he couldn't shave off until the play was over. But as executive producer David S. Goyer said at a New York Comic Con panel, he was convinced Ryan was perfect for Constantine:

He didn't look anything like Constantine, but he had this great performance ... I was running around the halls of Warner Bros. saying, "This is the guy! This is the guy!" And they just went, "No, it's not the guy."

About three weeks went by and I did a good job of sabotaging the other auditioners and Matt shaved his beard. When I said, "This is the guy!" they said, "Maybe it's the guy…" He flew out and did it in person and they finally approved. It was excruciating.

AND HE'S GETTING RAVE REVIEWS

Goyer's dedication paid-off and people are raving about Ryan. Moviefone called Ryan "the perfect man for the job" and E! News gave him this raving Constantine review:

With any other actor, Constantine would have ended up feeling like yet another reluctant hero, or just a chance for some good-looking actor to brood in a campy supernatural adventure. But Ryan pours so much emotion—pain, hope, regret, grief, desperation—into the titular character that you feel what he feels. You're hooked from the moment you look into his world-weary eyes.

HE'S DEDICATED TO HIS ROLE

Like John Constantine, Ryan is a major smoker. And although broadcast network rules are keeping him from lighting up, Ryan told Superhero Hype that he's hoping to bring truth to the character's major habit (in the comic books it is so essential that Constantine even gets lung disease):

John Constantine is a smoker. There’s no question about it. I think in the original description of the character, it’s the third thing that’s mentioned ... It’s just that we’re not going to dwell on it too much. There’s only so much we can show but yeah, we’ll have him putting out cigarettes, doing a lot of other stuff like that. It’s still an essential part of the character. It’s got to be in there. For me, it’s got to be in there.

As long as it doesn't get you kicked out of any more hotel rooms, Ryan.