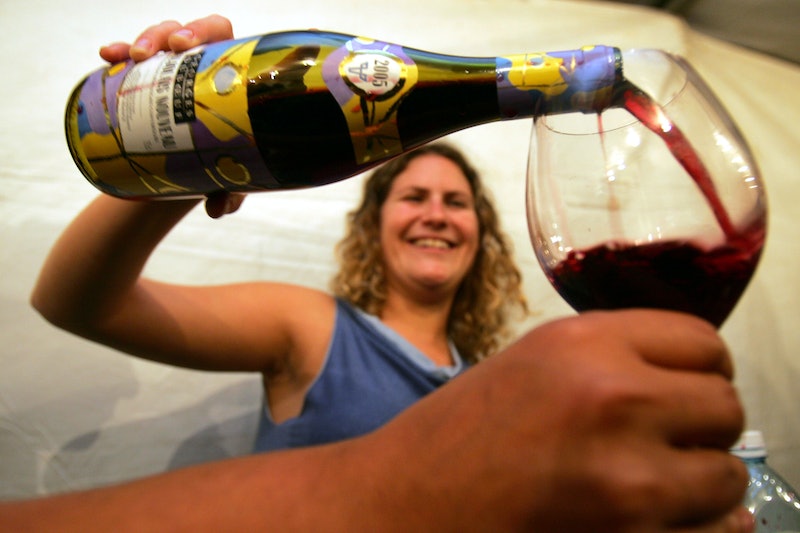 Benjamin Franklin is oft misquoted as saying "Beer is proof that God loves us and wants us to be happy." His actual statement, however, was about wine. "Behold the rain which descends from heaven upon our vineyards," Franklin wrote in a letter to French economist André Morellet. "There it enters the roots of the vines, to be changed into wine, a constant proof that God loves us, and loves to see us happy."

I bring you this little history lesson because it seems science has shown Franklin to be right — if not about God's hand in the business then at least about wine happy-making potential. In a new study, Spanish researchers found moderate wine drinkers were less likely to be depressed.

Published in the journal BMC Medicine, the study followed more than 5,500 men and women for up to seven years. At its start, all participants were 55- to 80-year-olds without histories of depression or alcohol problems. By the study's end, 443 participants had either been diagnosed with clinical depression or prescribed antidepressants.

Overall, those who consumed alcohol of any kind moderately were less likely to have become depressed.

In particular, wine drinkers showed the strongest association, with low- to moderate consumption — that's two to seven glasses of wine per week — significantly linked to lower depression rates. This group had one-third less risk of depression than those who abstained from alcohol entirely.

(Heavy drinking was linked to slightly higher rates of depression, but the authors note that the total number of heavy drinkers in the study was too small for this to be considered significant.)

But the researchers suggest several plausible ways that wine itself could be a sort of antidepressant. Resveratrol — a strong antioxidant and the key active component in red wine — has been shown to be "neuroprotective," positively affecting the way nerve cells and brain chemicals interact. And because depression and heart disease are believed to share common roots, wine's known benefits to our hearts could also be a boon for mental health.

More like this
Ashley Benson Revealed The Whole-Body Effects Of Her Anxiety On TikTok
By Stephanie Topacio Long
TikTok’s Viral Tunacado Sandwich Is The Internet’s Favorite Lunch Right Now
By Alexis Morillo
How Long Does Leftover Stuffing Last? Here's When To Toss It
By Chelsey Grasso and Alexis Morillo
Pepsi’s Festive Flavour Is Finally Coming To The UK
By Sophie McEvoy
Get Even More From Bustle — Sign Up For The Newsletter