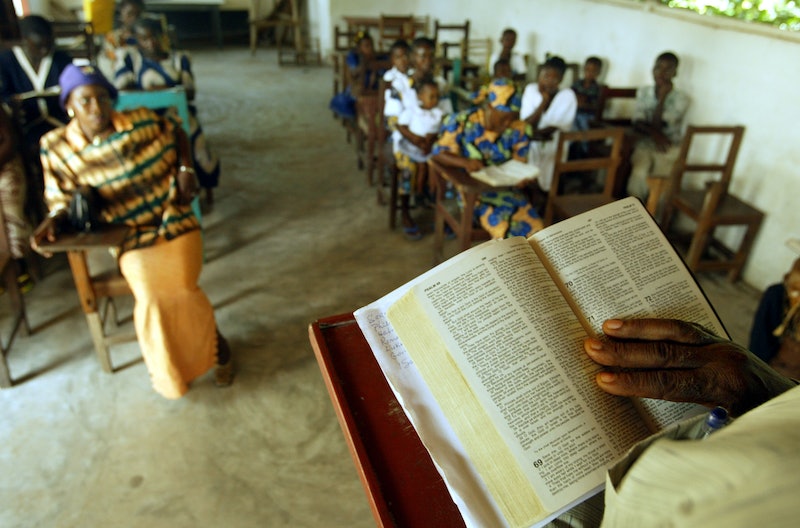 Anti-gay discrimination has reared its ugly head again, this time in Liberia, one of four countries currently stricken with Ebola. Why this time, you ask? Well, for causing Ebola, obviously. Local Christian leaders have said that Ebola is God's punishment for homosexuality, and since then, members of the community have been harassed, physically attacked, and even had their cars destroyed.

Reuters reported that Liberian LGBT campaigner Leroy Ponpon said he stays at home, fearful of both catching the deadly virus and being attacked for his sexual orientation:

Since church ministers declared Ebola was a plague sent by God to punish sodomy in Liberia, the violence towards gays has escalated. They're even asking for the death penalty. We're living in fear.

In a July meeting of the Liberian Council of Churches, religious leaders put out a statement that said "God is angry with Liberia," adding:

Ebola is a plague. Liberians have to pray and seek God's forgiveness over the corruption and immoral acts (such as homosexualism, etc.) that continue to penetrate our society.

An Amnesty International representative in West Africa, Francois Patuel told Reuters that there were reports of threats and violence against the LGBT community in Liberia's capital, Monrovia, since Christian leaders weighed in on the Ebola outbreak. He said,

Amnesty has received pictures of cars that reportedly belong to gays with their windows smashed as well as reports that gays have been forced from their homes and had to go into hiding.

According to BBC World, Liberia is the country worst hit by the Ebola epidemic — about 50 new cases are reported everyday in Monrovia. With its healthcare system in shambles in large part due to the virus outbreak, Augustine Kpehe Ngafuan, Liberia's Minister of Foreign Affairs, told Reuters that the country "entered the epidemic with only about 50 doctors for 4 million people" — a imbalance so stark that it actually made me gasp.

Back in 2012, Liberia's president, Ellen Johnson Sirleaf, sent shockwaves throughout the international community when she said in an interview that she would not decriminalize homosexuality, citing the preservation of traditional values in their society. President Sirleaf is a Nobel Peace Prize laureate.

Africa has not been kind to the LGBT community. Jay Michaelson at The Daily Beast reported that of the 78 countries that ban homosexuality, "almost all anti-gay laws are a vestige of European colonialism, and date back approximately 150 years." Funnily enough, anti-gay leaders in Uganda, Kenya, Nigeria, Cameroon, Ethiopia and Sierra Leone have denounced gay rights and homosexuality as a “Western” concept that must be opposed to preserve “traditional African values.”

The rise of anti-gay sentiment in Africa is in large part due to the spread of American evangelism. Kapya Kaoma, a priest and human rights activist, wrote in an LA Times Op-Ed of the homophobia exported from the U.S.:

In recent years, millions of dollars have been funneled from anti-LGBTQ evangelical conservatives to Uganda, funding local pastors and training them to adopt and mirror the culture-war language of the U.S. Christian right.

And of course, trust the Christian right to convey a similar hate-filled, discriminatory narrative on the Ebola outbreak back here in the U.S., too. In August, conservative radio host Rick Wiles said in his talk show that there was a silver lining to the epidemic:

Now this Ebola epidemic can become a global pandemic and that’s another name for plague. It may be the great attitude adjustment that I believe is coming. Ebola could solve America’s problems with atheism, homosexuality, sexual promiscuity, pornography and abortion.