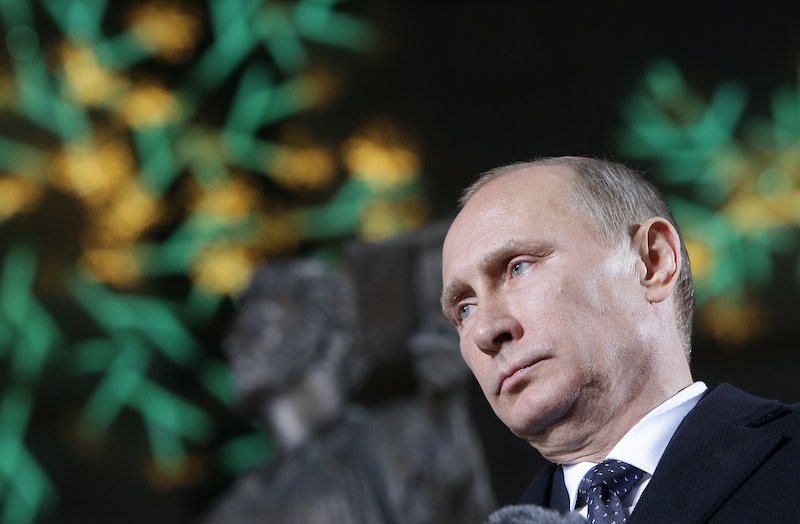 If there's one thing we know for sure about the enigma that is Vladimir Putin, it's that he does not mince words. The usually stoic president made a rare display of emotion during his speech to Russia experts at the annual Valdai Club on Friday. President Putin unleashed a 40-minute anti-American rant, in which he accused the U.S. of destabilizing the world order, blamed the Ukraine crisis on the U.S., and emphasized that Russia will not give into the pressure of Western-imposed sanctions.

Since its inception in 2004, the Valdai International Discussion Club meets each year to create an international forum for foreign experts on Russia to meet and discuss key social, economic, and political issues with Russian leaders. At this year's meeting, which took place in the Black Sea resort city of Sochi, Putin took to the podium, and he was visibly angry.

Among the criticisms he flung at the U.S. were its involvement in the affairs of other countries, such as Iraq, Syria, Libya, and, of course, Ukraine. Putin accused the U.S. of trying to "remake the whole world" for its own interests while jeopardizing global stability. He pointed out that not only has the U.S.' "unilateral diktat" not improved global peace, "the imposing of schemes (on others) have exactly the opposite effect." Want proof? Just look at Ukraine, he says.

The probability of a series of acute conflicts with indirect and even direct involvement of major powers has sharply increased. Ukraine is an example of such conflicts that influence a global balance of forces, and, I think, not the last one.

Putin mentioned the U.S.' past support for Islamic extremists, which he credits with creating the current situations in Iraq and Syria.

They are throwing their might to remove the risks they have created themselves, and they are paying an increasing price.... It never ceases to amaze me how our partners have been guilty of making the same mistakes time and again.

And that's just the tip of the iceberg. When it comes to anti-American venom, it's clear that Putin does not have a shortage.

The U.S. Is to Blame For Ukraine

When commenting on the chain of events that led to the revolution in Ukraine and the current divide between pro-Russian separatists and Ukrainian nationalists, Putin points his finger at the West.

Instead of a difficult but, I underline, civilized dialogue [the West] brought about a state coup. They pushed the country into chaos, economic and social collapse, and civil war with huge losses.

Putin denied that Russia was trying to rebuild a Soviet empire or reclaim its Cold War-era status as a superpower.

Statements that Russia is trying to reinstate some sort of empire, that it is encroaching on the sovereignty of its neighbors, are groundless.

In fact, all he's asking for is to be treated as they've supposedly been treating everyone else: with respect.

Russia is not demanding some special, exclusive place in the world. While respecting interests of others, we simply want our interests to be taken into account too, and our position to be respected.

But Russia Will Not Break Either

However, just because Russia is not trying to dominate doesn't mean it can be dominated either. When talking about the Western-imposed sanctions that reduced Russian banks' access to foreign capital markets and caused the ruble to plunge, Putin says Russia is not intimidated.

Such a country as Russia will certainly not bend under pressure.

Putin even evoked classic Russian imagery to make his point.

Putin's speech may have been vitriolic, but it wasn't without poetry.Images: Getty Images (3)