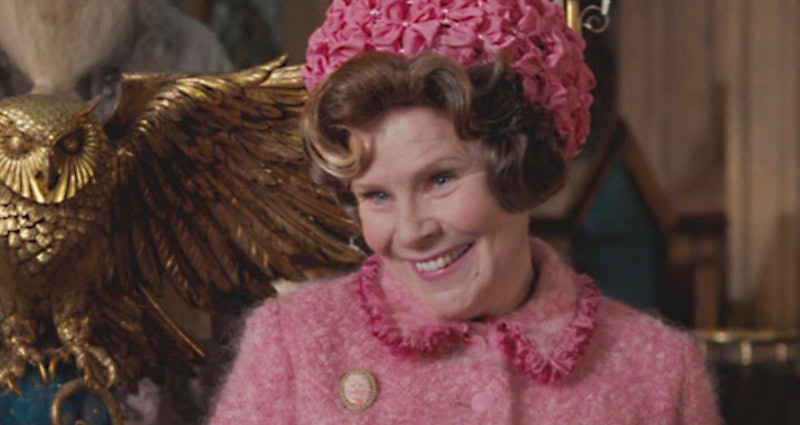 Attempting to determine the worst villains of the Harry Potter series brings up a lot of big questions. What is a villain? Do they exist at the place where the amount of evil outweighs the good by just a little? Is it just the Death Eaters, or might there be something villainous within Ron Weasley?

By including a character in a list of villains, am I denying or glossing over any positive characteristics they might have? Because we know about Lord Voldemort's undeniably troubled childhood, he is in some ways more sympathetic than a blandly pesky character like Rita Skeeter. J.K. Rowling just announced a short story centered around Dolores Umbridge, whom many consider to be one of the most evil Potter characters and whom Rowling herself referred to as "a nasty piece of work." Perhaps the story, which is to be released on Halloween, will explain through a series of horrific childhood events Umbridge's penchant for punishment and pink. Would that affect her inclusion on this list?

The dictionary definition of "villain" is "a character whose evil actions or motives are important to the plot." In light of this, I'll focus on those characters who impeded Harry Potter's quest for goodness through evil motives, while always keeping in mind that there is good and evil in all of us (and ignoring creatures like Dementors, who really just want to eat... your soul).

You have to feel bad for any squib at Hogwarts, but he does make it really hard to sneak around after hours.

They love cleanliness more than anything, and they love everything more than Harry. Dudley, however, redeems them a lot at the end.

Yeah, he turns out OK (do I need to make spoiler alerts for Harry Potter?), but he did some bad stuff at the beginning, like call Hermione an insufferable know-it-all.

She's a disgrace to the name of journalism, but she doesn't wreak that much havoc.

He's too weak to be truly evil, despite the Dark Lord in the back of his head.

As the underdog, he has a pretty sympathetic back story, and he redeems himself at the end.

Fudge is a villain in the way that politicians who do nothing are villainous, which makes him extra scary.

All he cares about is gold, and he screws over Harry and the rest at a pretty crucial time.

They just love torture so much.

His "for the greater good" philosophy is pretty damaging.

She's pretty insane an murderous, but she just wants to be loved (admittedly by Voldemort).

She's super prejudiced, and her love of order and cat plates is terrifying.