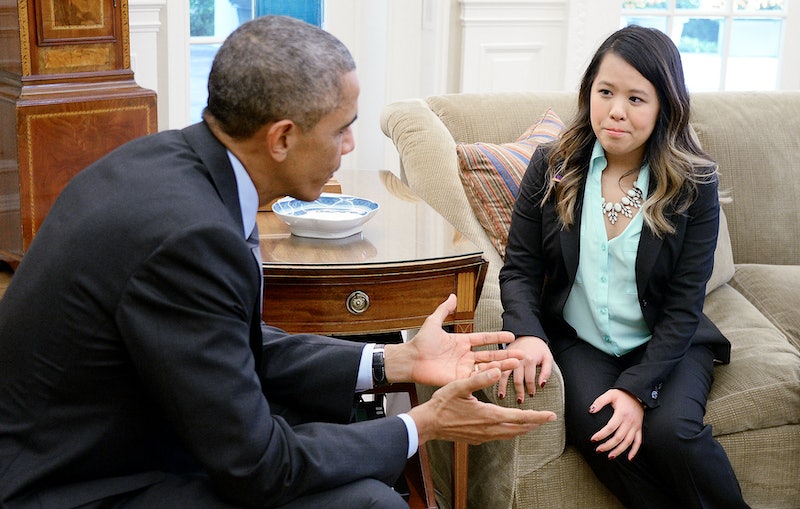 Two weeks after becoming the first person to catch Ebola on U.S. soil, Nina Pham is now Ebola-free. The 26-year-old nurse was infected while caring for the first U.S.-diagnosed patient, Thomas Eric Duncan, at Texas Health Presbyterian Hospital in Dallas. On Friday, Pham was discharged from the National Institutes of Health hospital in Bethesda, Maryland, where she had been transferred for treatment. After a happy press conference announcing the news, Pham had one very important first stop to make as an Ebola-free woman before returning to normal life.

Pham had been diagnosed with Ebola on Oct. 11 after treating Duncan when he was exhibiting advanced symptoms and was highly contagious. Pham was flown to the National Institutes of Health hospital on Oct. 16, where she received several experimental treatments. On Tuesday, the hospital had released an update stating that her condition had been upgraded from fair to good.

At the press conference, Dr. Anthony Fauci, director of the National Institute of Allergy and Infectious Diseases, declared that Pham had beaten Ebola. The nurse then took to the mic to give her thanks.

I feel fortunate and blessed to be standing here today.... I do not know how I can ever thank everyone enough for their prayers and the expressions of concern, hope and love.

Pham made sure to thank one person in particular, Dr. Kent Brantly, who had donated his blood to her for a still-experimental transfusion treatment. But because Pham was given a combination of experimental treatments, Dr. Fauci, who noted that she had tested negative for the disease five times, said it was "virtually impossible to say that this is the thing that did it."

And just because she's Ebola-free doesn't mean she's 100 percent just yet. But either way, she's looking forward to being reunited with one friend in particular.

Although I no longer have Ebola, I know that it may be a while before I have my strength back. So with gratitude and respect for everyone's concern, I ask for my privacy and for my family's privacy to be respected as I return to Texas and try to get back to a normal life and reunite with my dog, Bentley.

Bentley, Pham's Cavalier King Charles spaniel, has also been held in quarantine and monitored for the virus. Like Pham, he also tested negative for Ebola on Wednesday. But before she returns to Dallas to resume her normal routine, she has one important stop to make.

After the press conference, Pham visited the White House, where President greeted her in the Oval Office with a hug.