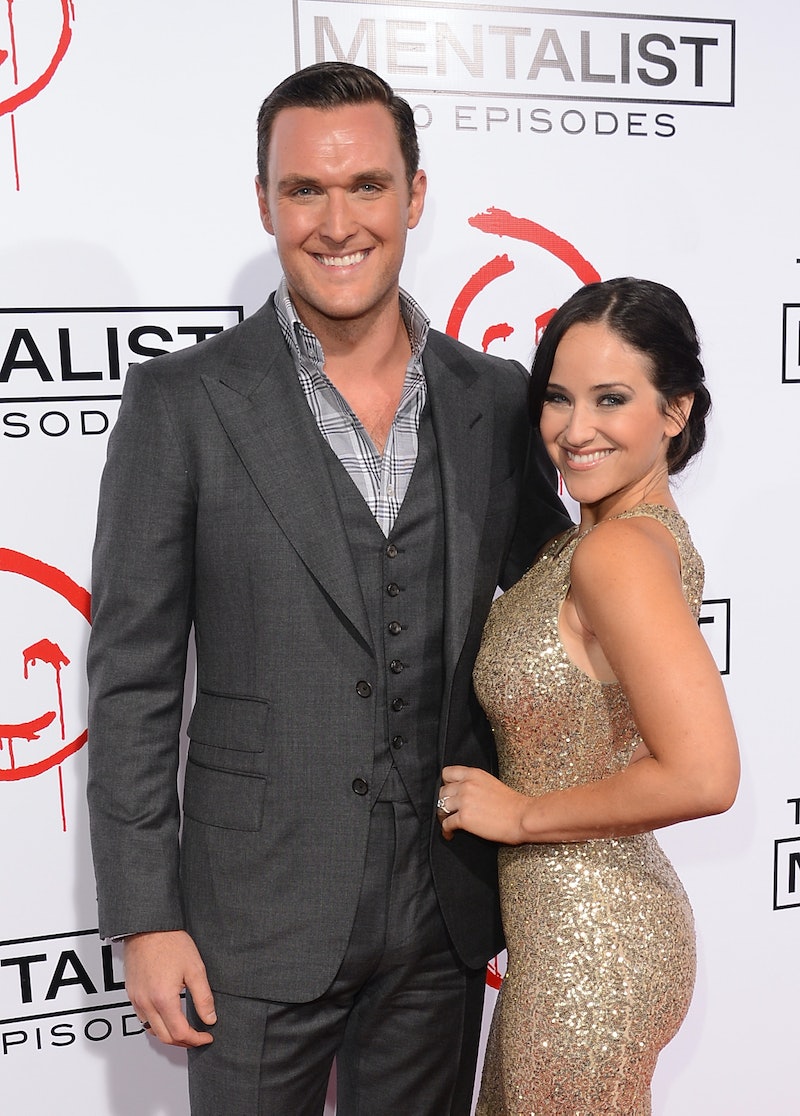 What better way to spend an afternoon than by delving into a famous married couple expecting their first child? Just who am I talking about? It is none other than former Mentalist actor Owain Yeoman and his wife Gigi Yallouz who are expecting a baby! Most of us know and love Yeoman for starring as Wayne Rigsby alongside Simon Baker (FYI, these two both have accents — Yeoman is from Wales and Baker is from Australia — and they're delicious), but now that Yeoman is no longer on the CBS drama, what's he been up to? In addition to guesting on CBS's sci-fi series Extant, he'll soon be see on AMC's Turn as Benedict Arnold. And he'll soon be busy as a new dad!

First reported by People, the happy duo are thrilled to bring a child into the world, and it comes at the perfect time since they just celebrated their one-year anniversary in September. "We are overjoyed to announce our pregnancy! Obviously this is big news for our French bulldog Cash, who up until now has been an only child. We are pretty certain the baby was made in Wales and that definitely made Owain, a proud Welshman, extremely happy!" They added, "We feel so blessed to share this fantastic news and are excited to start this new chapter in our life."

Moving on from this exciting announcement, let's take a look at Yeoman's love. Who is Gigi Yallouz? Well, the two tied the knot in September of last year, and judging by their photos spread across social media, they are 100 percent in love (but, more on that later). In addition to being married to a TV star, what else do we know about Yallouz? Well, let's take a look.

Yallouz is a professional jewelry designer, who doesn't just create standard jewelry, but is all about making meaningful pieces. For example, she fashioned a few jewelry pieces for a Compassion Brand event supporting anti-bully awareness. Seeing as she has their link as part of her Instagram bio, I'd say she's pretty committed to the campaign.

Like her husband, who's a vegetarian, PETA spokesman, and animal activist, Yallouz is also an animal lover. It's pretty easy to tell how much she loves animals, especially when she's calling Yeoman's dog her "son" and posting photo after photo on Instagram. Just look at them. So sweet!

Alongside Yeoman, Yallouz seems to be all about supporting important causes. In addition to anti-bullying, Yallouz and Yeoman also participated in the NOH8 Campaign promoting marriage, gender and human equality through education, activism, social media, and visual protest. Not only are they dedicated to one another, but they're most definitely dedicated in spreading the good word.

She's Madly In Love With Her Husband

Lastly, and most obviously, Yallouz is madly in love with her hubby. These two can't stop posting photos of one another. From vacations to wedding photos to sweet messages, there's no doubt these two have eyes only for one another. The photos are pretty much self-explanatory.

More like this
Gwendoline Christie’s Partner Is Part Of Royal Family History
By Parry Ernsberger and Sophie McEvoy
Who Is Camila Cabello Dating? She's Getting Cozy With Lox Club CEO Austin Kevitch
By Radhika Menon
Kim Kardashian & Pete Davidson’s Relationship Timeline From Start To Finish
By Jordyn Tilchen and Bustle Editors
'A League Of Their Own' Star Abbi Jacobson Is Engaged To Jodi Balfour
By Jake Viswanath
Get Even More From Bustle — Sign Up For The Newsletter