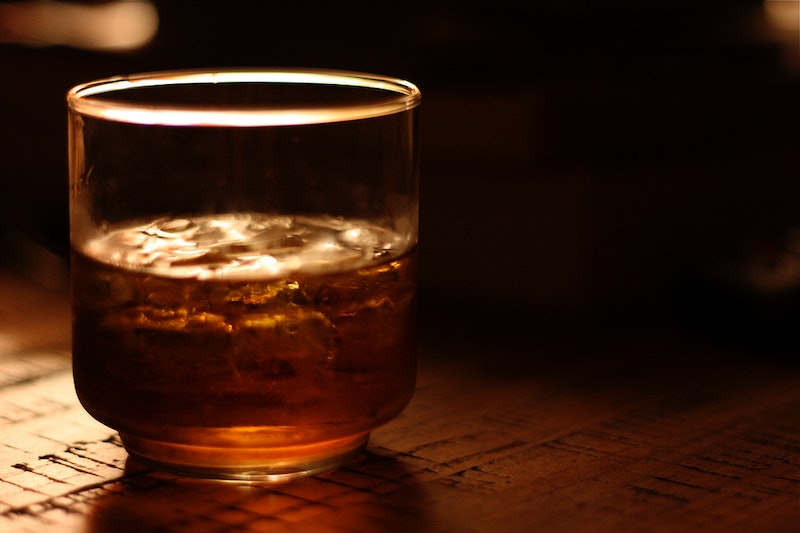 I am a drinker of scotch, out and proud. But this wasn't always the case. Oh no, my history as a lover of alcohol-laden libations began many moons ago when I was but 18 (sorry, mom). I was a late bloomer where hooch was concerned. About to go away to college, outside of communion wine (baller), I'd never had a sip of anything else. So my friends and I gathered at someone's parents' house and made vodka tonics. Four drinks in, I was all, "I don't feel anything," putting my drinking glass down on the glass table with such force that both shattered. And so it began.

I dabbled in all of the booze-things, but outside of scotch and gin, I was a wine and beer girl. The sweeter the better. I cannot look at Smirnoff Ice now without shuddering when I think of just how much of it I imbibed in a six months period. It is amazing that I do not have diabetes. Anyway, that all changed when I hit grad school. By then I'd pretty much convinced myself that gin and tonics were where it's at, until a dapper returning-student (read: much older guy) in my program proceeded one night, to educate me in the ways of scotch. Others might scoff and cringe, but scotch to me, is the perfect booze -- if you are into things that taste like fire, peat moss, and sometimes bitter bacon. Here are 11 reasons scotch drinkers are the best.

1. We Can Have Seconds

Scotch isn't like a mixed drink, all rife with cream, stuffed with cherries and topped with a sugar or salt rim. Scotch is just scotch. It goes in a glass. Sometimes you put in the glass with the scotch. You aren't going to fill up on scotch, so, the next time your friends go out for dinner, you can have enchiladas AND fajitas. Because while they are hemming and hawing and ordering salads to leave room for the margaritas, you are consuming all of everything, with room for more.

There's an idea of what a scotch-drinker looks like. Usually, it's not a short, youngish, bespectacled female. Although, to be fair, I'm doing my part to change the stereotype. I can honestly say that there has not been a time I have not gone to the bar, ordered Dewar's on the rocks, and not been greeted with a surprised smile. Bartenders have to spend much of their day catering to folks into mixed beverages that require dry ice. You? You keep it real. And they respect that.

If you drink scotch, you probably have manners. They might be manners that are held over from the 1970s and thus kind of misplaced and strange, but you have them. Scotch drinkers are passionate about the code of conduct they subscribe to. If you're with a scotch drinker, expect them to open the door for you – it's just how they role: MANNERS, son.

When you think angry drunk, you probably think of something like some random ripping off his shirt and challenging someone to a beef after one too many tequila shooters (I watch a lot of reality TV. Like, a lot). Scotch drinkers are secret warriors. I may look petite and non-violent, but if you wrong a friend of mine and I have been tippling at the scotch, my glasses get left at the bar and we're taking it to the mean streets.

Scotch drinkers are never not excited to let someone who has never tried scotch before try their own. They are even MORE eager to share a really, really good scotch with someone who espouses that "scotch is gross." We are creepy zealots in our passion to convert you to the church of Scottish Whiskey: Let us give you this good news. *Forces tumbler to your mouth*

6. We're Up For Anything

I have found that most of the time, scotch drinkers are the folks most likely to keep a party going. They might seem soft-spoken and mellow, but the time of the evening comes where the night must end or kick it up a notch, it's the scotch drinker who is most likely to shrug and say, "let's keep going." Scotch drinkers: The most turnt up of all? Perhaps.

If someone is holding a tumbler of scotch and expounding, stop and listen. Scotch drinkers are the best storytellers around. Trust. They can make even the most boring and pointless tale seem witty, engaging, and worthy of your time. It is a gift, it is a curse, it is great when I want to talk about the pros and cons of getting bangs.

8. We Know our Limits

If you know enough about scotch to drink it and appreciate it, you know better than to overdo it. I'm not saying I've never woken up with a headache, but I can count on one hand the times I've gotten sick drink and they were all way before my older, more refined, scotch-drinking days.

9. We Aren't Above Drinking Games

True story: Once in Atlantic City, a dear friend introduced me to a scotch I'd never tried before. I was in heaven. Before the night was over, I had suggested scotch pong. This was a terrible and hilarious idea that I both do not regret and will never stop regretting. Scotch drinkers: We are inventive!

10. We're Masters of the Deadpan

A palate for scotch takes time. That's why professional scotch drinkers never pull a face at the first sip – they've grown to love it, and they've spent time for the drink. If you're looking to get away with something naughty, enlist a scotch drinker as your partner in crime. Every word they say will be believed.

11. We Know How to Stay Calm In a Crisis

What's that you say? A crisis? Of the work or home variety? Both? Excellent, I have just the solution: BRING ME ALL THE SCOTCH YOU HAVE. Rinse, wash, repeat.