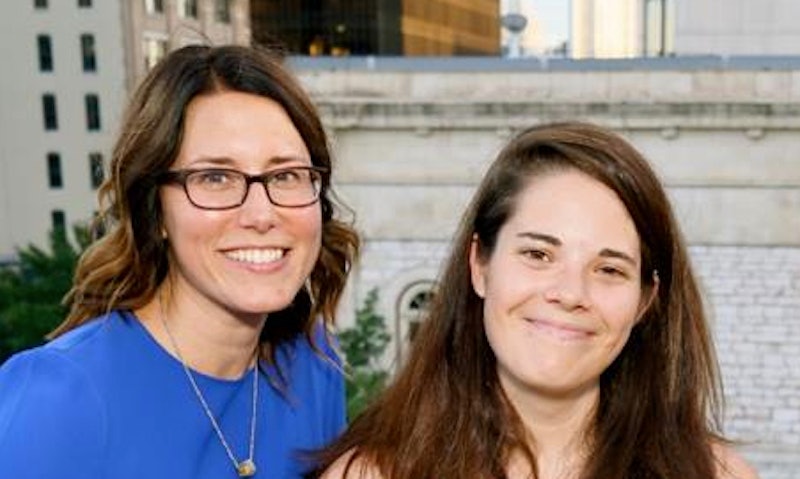 It is an oft-bemoaned fact that in the publishing industry we’re still living in a man’s world. VIDA — an organization that tracks the progress of women in the literary arts — comes out each year with the stone cold truth: men’s books get reviewed more often, more men get published in literary journals, and more men enjoy bylines in major news publications.

So when I first heard about A Strange Object, a women-run independent press whose first book was by a debut female author, I felt like extending my arm 2,000 miles for a high-five. Co-founders Jill Meyers and Callie Collins, along with a small staff of other badass literary ladies, publish novels and short story collections from their offices in Austin that you can't put down. And then they make damn sure these books get taken seriously once out in the world.

I recently spoke with Meyers and Collins about the press, the difficulties they’ve faced with publishing a woman author, and all the lively, bourbon-infused events they have in store (they know how to host a good party — trust me).

BUSTLE: A Strange Object (A/SO) was striking when it first came on the scene for having an all-woman staff and publishing a debut book by a woman author, Kelly Luce’s Three Scenarios in Which Hana Sasaki Grows a Tail, but being a serious publishing venture and not at all fringe. Was that gender makeup fortuitous happenstance, or were you actively seeking a manuscript by a woman for your first publication?

JILL MEYERS AND CALLIE COLLINS, VIA GOOGLE DOCS: A little of both? When we were starting the press, we contacted a string of writers we admired, whose stories we’d published, in the hopes that they might have a longer manuscript they were working on. There were some men on the list, but it skewed pretty heavily female.

When we found Kelly Luce’s collection, we were struck by its playfulness, its fantastical turns, and its big heart. We loved it; we were going to do right by it. At the same time, we were aware that this book was really our first communication with the world as A Strange Object. A mesmerizing, offbeat story collection that examines all the human business of love and death — yes, that’s great. But one that does that and also quietly investigates gender roles, and does it all with an attitude of wonder, well, that was absolutely the right first book for us.

You both worked together previously at the lit journal American Short Fiction. Is that where you initially met? How did you come up with the idea to create A/SO together?

We met at American Short Fiction — Jill was the magazine’s editor and Callie was its associate editor.

While at the magazine, we often talked/fantasized about starting a books division. We began thinking about themed anthologies, reprints from ASF’s published stories—it seemed like a natural way to ease into it. There was our strange animals/imaginary creatures one (including one with Antarctic explorer Shackleton and foul-mouthed unicorns!), and one tied to geography (intimate, mythical, or real), one that grouped together stories that altered time in surprising ways (who doesn’t like time travel?), another one that handled girls’ and women’s friendships. We were also into the idea of publishing original longer works.

The books division never came to be, but when the publisher lost its funding for the magazine, we looked on it as an opportunity to strike out on our own and refine this notion of books. We knocked out the press’ initial concepts over a lot of coffee the same weekend that Curiosity landed on Mars. (Did you watch that? It was glorious. It required a great deal of collaboration and precision and imagination—and a sky crane! It stuck that landing beautifully. Look, we’re no NASA, but it seemed a good omen.)

I did! It was incredible. And “Curiosity Lands on Mars” sounds like a story title that would appear in one of your collections. You’ve now published two story collections, both excellent, one by a man and one by a woman. Have you found differences between them in getting them distributed, reviewed, or otherwise marketed? Or do you think the playing field is somehow more leveled in indie publishing?

There were certainly differences in the way the two collections were received, but perhaps not entirely due to to the gender thing. Hana Sasaki and Misadventure [by Nicholas Grider] are just strikingly different collections. Kelly’s stories are funny, tender, and fantastical. Nicholas’s collection is full of pieces that are deeply interested in form and language, stories that experiment and divert and invite the reader to play. They’re also interested in subverting the traditional narrative of gay middle America.

Queer writing is as marginalized and under-reviewed in major markets as writing by women is — if not more so.

They have different audiences. We tackled marketing and PR differently. Queer writing is as marginalized and under-reviewed in major markets as writing by women is — if not more so. But I think we have seen a difference with smaller outlets — maybe the playing field is a little more level in indie publishing. We’ve found that readers who trust small presses and read progressive venues (like Bustle!) for reviews and recommendations are more likely to get excited about fiction coming from fresh voices. We’d still love to break into some of the bigger, more traditional reviews sections — and we’d love to do it with a book by a woman or a queer writer or a writer of color — but the younger, hotter (right?) literary community has been tremendously receptive to the work we’ve put out so far.

Can you talk a little about the aesthetic of A/SO? What do you mean by “strange fiction?”

We like fiction that fires up the heart and the brain. Or: we’re interested in fiction that is both carefully crafted—that pays attention to language and rhythm, for example—and emotionally engulfing. We want work that glows. We love short stories, but we’re also interested in acquiring novels, novellas, and eventually essays, too. We gravitate toward strong voices and uncanny details. We’re both from Texas and we love writing that reminds us of the West in some way — work that’s a little wild. We like a little wildness.

A/SO is turning into a veritable empire — in addition to the books you’re putting out, you also run a reading series and there have been rumblings about your publishing a digital literary journal as well. Can you talk a little about these side-projects, or if you envision them becoming not so “side?”

We see all these things as integrated. Indie presses can engage their audiences on a much more personal level than major houses can, and we see our various projects as ... different experiments out of the same lab. They’re all ways to get fresh, risky voices into new heads.

We try to put on readings and launches that surprise people and take advantage of all of the different kinds of spaces we have in Austin — we’ve held events in galleries, bookstores, on a rooftop deck downtown. (We also are doing our part to introduce the press to audiences on national scale, with events in New York and San Francisco and Seattle.)

We like fiction that fires up the heart and the brain.

Our online magazine, Covered with Fur, is launching this fall. We hope it’ll be a little like a digital curiosity cabinet, full of extraordinary writing about everyday objects along with candid musings on the extraordinary. We’ll feature one piece of fiction and four pieces of nonfiction every month. We couldn’t be more excited about what’s coming up.

Aside from these projects, what’s your next title?

Our next book, a fiction debut, is Our Secret Life in the Movies, by Michael McGriff and J. M. Tyree, out November 4. It’s a book that began when the authors attempted to watch the entire Criterion Collection — that’s more than 600 films — in a single year. It’s a coming-of-age narrative that captures the dreaminess, the hypnotic power, of cinema. David Gordon Green called it “a beautiful aftershock of the movies.”

Switching subjects: Austin is very in right now — I think some of these city roundups have even determined that it, like Brooklyn, is so hip it’s “over.” How does this translate to the literary scene? Who are your publishing brethren in the city, and how does A/SO fit in?

Ha! We’d love it if Austin would really jump the shark and stop appearing in all these city roundups. You should see the traffic. Something like 150 new people move to the city every day. It’s a completely different city than it was even five years ago.

We’d love it if Austin would really jump the shark and stop appearing in all these city roundups.

It’s gratifying, though, to see what the growth has meant for the literary community. Austin’s still feels a little like a small town — it’s silly, but people here actually are very friendly — and even with the rapid influx, it’s stayed an inclusive community. We come out for each other; attend each other’s readings and performances. The city’s full of folks with big ideas, and it’s still cheap enough to experiment a little.

There are several amazing magazines who call Austin home: American Short Fiction, The Austin Review, Foxing Quarterly, to name a few. There are stellar reading series and major events like the Texas Book Festival that bring nationally acclaimed writers in and showcase all the local talent.

As far as presses go, we’re holding down the fiction fort for now. The University of Texas Press is an institution in town, and Write Bloody is putting out great poetry collections.

Do you have any advice for women interested in publishing?

Be rigorous and ethical and kind. Show up. As much as possible, support other women and their projects.