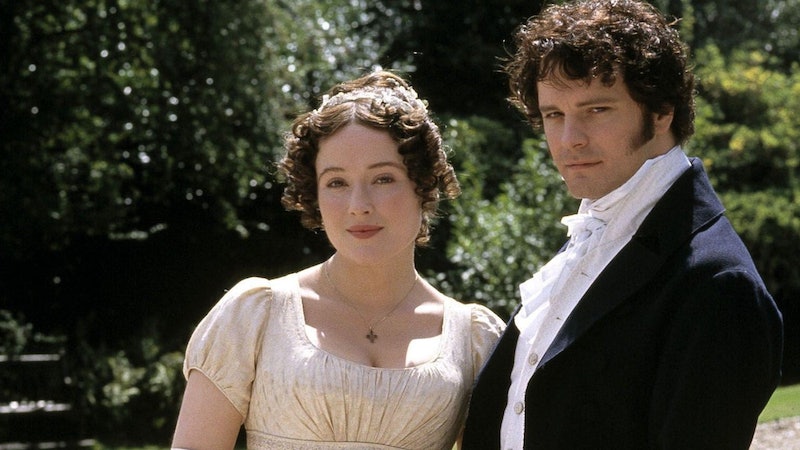 It is a truth universally acknowledged that a single woman with a literary nature must have seen the 1995 BBC adaptation of Pride & Prejudice. And by “seen,” I, of course, mean, “watched so many times we now know how to dance a quadrille.”

This is a safe space.

Not to disrespect our communal love for Colin Firth's wet, white tunic or anything, but there are only so many times you can watch the miniseries before loved ones start to worry it’s a problem. The good news, however, is that the rabbit hole that is Netflix does not lack for literary adaptations to fill that Pemberley-sized hole in your heart. Taken from O.G. feminist writers like Elizabeth Gaskell (who edited Dickens — can you imagine having the fortitude to edit Dickens?) to Nobel-winning Victorian family dramas, these adaptations give you the costumes and wit you’ve come to demand from your television viewing experience, and most have a wedding or few by the end. And a few fraught ballroom scenes and deaths by consumption for good measure.

Here is a list of miniseries and movies you need to get on your queue before you have Eliza's refusal of Darcy's proposal actually memorized by heart:

Why you should watch it: This is like Pride and Prejudice if Mr. Darcy were a nouveau riche mill owner with cheekbones of flint. Margaret Hale, the daughter of a clergyman who moves his family to a rough, Northern manufacturing town during the Industrial Revolution, finds herself sympathetic to the plight of the striking mill workers. Trouble is, she’s in the same social circle as the mill owner himself, a certain Mr. Thornton, who makes things complicated by being a dreamboat. I would learn his rough, Northern ways, is what I’m saying. There’s repressed desire. There’s just enough social justice in the strike plot line to make you feel like a good human. It’s everything.

The moment you’ll put on rewind: Spoiler alert, but Mr. Thornton proposes. And, like poor Darcy, the first time doesn’t go over so well. How satisfying is it to watch a lady turn it down and still land the guy at the end? Talk about eating the cake you have.

Why you should watch it: Alan Rickman plays a hair dresser who is bullied into entering a national haircutting competition by his teenaged son and estranged wife who is dying of cancer and left him for a woman. Oh, and his son is a young Josh Hartnett, rocking some solid nineties man bangs. Do I really have to expand on that? Fine, I can: There’s hair dye practice on corpses. There’s surprisingly tender realtalk. Hugh Bonneville, the Earl of Grantham, plays a flamboyant hair dresser. Why haven’t you left this page and started watching already?

The moment that you’ll put on rewind: Alan Rickman gets quietly drunk and dances in his barber shop while cutting invisible hair. Why there is not yet a .gif of this is one of the great mysteries of the world.

Why you should watch it: Firstly, just to marvel at Damien Lewis’ absurd talent with accents. But also, like P&P, this is not a story about one person but about an entire family attempting to climb the social ladder and figure out how to take care of their own. The word “saga” is in the title, which is really the literary way of saying “soap opera”— make sure you clear your schedule for the day when you start this one, because you’re going to be starting up each episode right as the last one ends. You have to know if Irene will dance at the party even though she’s still in mourning! And if Jolyon will reconcile with his son after the grandchild is born! Every twist and turn is so satisfying.

The moment you’ll put on rewind: Don’t want to spoil too much, but the villain you can’t help but feel sorry for bites his lip until it bleeds while watching his love dine with his estranged cousin in the restaurant his mistress runs. Trust, it’s a satisfying moment for anyone watching.

Why you should watch it: Let’s face it, there are too many Agatha Christie adaptations out there. Not to diss Angela Lansbury or anything (she is, after all, the lady we want to be when we grow up) but there just aren’t enough hours in a lifetime to sift through them all, trying to separate the wheat from the chafe.

Don’t worry, Poirot is the wheat. David Suchet, who plays the titular Belgian detective, portrayed the role for 13 years and prepared for it by copying out every description of his character from every Poirot novel Christie ever wrote. Christie’s daughter has said she wishes her mother could have lived to see Suchet play the fussy detective, which is enough commendation for me. This is perhaps not the best series to turn to if you’re looking for a romantic fix, but, really, when are you not in the mood for some Aggie Christie?

The moment you’ll put on rewind: Any and all times Poirot skewers someone in his sly, Belgian way. Which is pretty often.

Why you should watch it: No, I'm not talking about the 1993 adaption, but this beautifully vintage 1975 one that’s on Netflix and countless have stumbled across while looking for the ’93 version. But what a fortunate mistake it is! Shots upon shots of gothic, uncomfortable rooms, the adorably snotty way Mary Lennox says her ayah used to do that for her. There’s a small chance that oboe intro music had hypnotic powers because you go in a trance for the whole thing.

The moment you’ll put on rewind: When Colin is still in his phase of being the worst, he throws one of his obnoxious tantrums and Mary stands next to his four-poster and tells him every last reason why he sucks. And she’s 10. If she weren't so young, I would advocate for this speech ending with her saying “suck on that,” hand motion and all.

More like this
Jennette McCurdy’s First Kiss On 'iCarly' Didn’t Go As Planned
By Bustle Editors
'The Sandman’s Ending Is A Departure From Neil Gaiman’s Comic Book Series
By Kadin Burnett
Candice Carty-Williams’ New BBC Drama Will Be “A Love Letter To Black British Music”
By L'Oréal Blackett and Sophie McEvoy
'Bridgerton’s Jonathan Bailey & Simone Ashley Just Teased A First Look Of “Kanthony” In Season 3
By Grace Wehniainen, Alyssa Lapid and Sam Ramsden
Get Even More From Bustle — Sign Up For The Newsletter