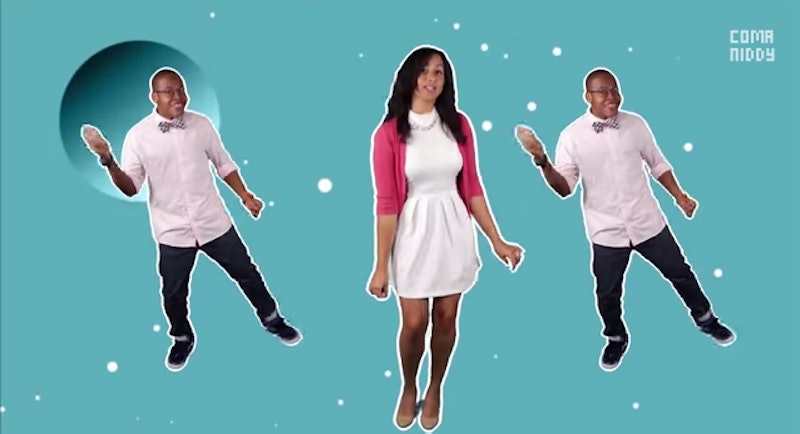 From Postmodern Jukebox’s song cover played on a bass, to 11-year-old Taylor Hatala’s amazing dance moves, Meghan Trainor’s top radio hit, All About That Bass, has had a major impact on so many people, creatively and emotionally. With a message about loving your body, as well as just simply being a catchy tune overall, the song has inspired hundreds of covers and parodies. It’s hard to choose which one has been my favorite so far, but of all the Trainor-related videos I’ve viewed, PBS’s nerdy, space-themed version of All About That Bass might be a top contender.

The video, which was created by self-proclaimed science rapper and Steve Urkel look-alike, Coma Niddy, and PBS digital studios, was released earlier in the month, on Oct. 6, but has just started to garner attention. Starring both singer Sabrina Pena and Niddy himself, the adorably nerdy music video discusses the basics of the universe and space as we know it.

The video begins with a feel quite reminiscent of a low-budget commercial to be honest, but it picks up once you see Niddy in his charming little bowtie and braces and hear the duo’s cute facts about science. Though the song isn’t quite as catchy as Bill Nye’s, it at least manages to get its message across in a manner that’s friendly to kids.

“When Pluto was demoted it seemed like the whole world went cray (there’s nothing wrong with being a dwarf planet). Where did all those people go when it came to climate change?” are probably my favorite lines. So accurate, but poor Pluto. However, aside from their fanastic humor, Niddy and Pena also do a great job pointing out the real problem with science nowadays: that more people need to be science literate and need to stop relying on “pseudoscience.”

Niddy’s song continues to reflect on this idea of pseudoscience with the oh-so-accurate lyric, “Our world runs on science but is run by politics,” additionally stating, “But that’s none of my business though.” Not only is this a completely accurate statement, but Niddy was also able to sneak in a Kermit the Frog meme reference, which makes my day.

Overall the video is oddly heartwarming and really brings you back down to earth (hah, see what I did there). The song makes you acknowledge how truly amazing space is, and makes you stop for a moment to think about how incredible it is that we’re all a part of it. As the lyrics go, “You and I, we’re made of star stuff.” Sit on that for a minute.