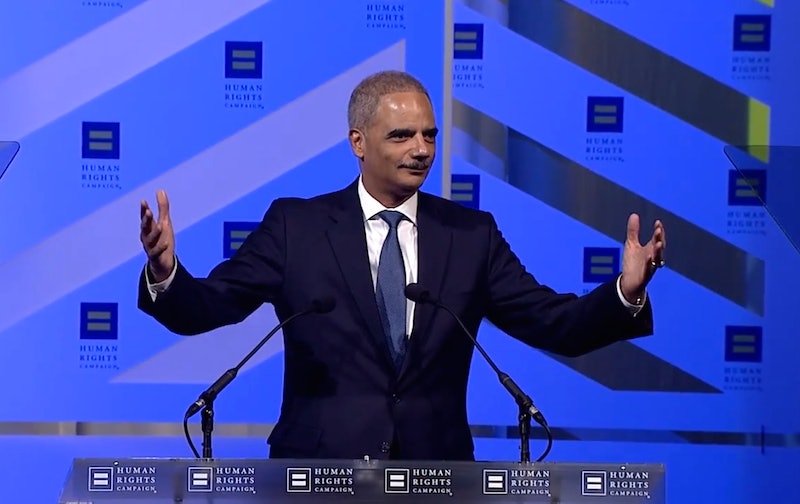 It's nice to know that we're not the only ones cheered up by how well things are going for marriage equality — some people in charge are enthusiastic about it, too! As a prime example, take Attorney General Eric Holder, who spoke Saturday night at the Human Rights Campaign's annual dinner in Washington. He made it pretty clear to the assembled crowd just how much his Justice Department's work on LGBT issues meant to him — Holder called same-sex marriage progress "exhilarating" and "gratifying," just hours after the announcement that six more states' same-sex marriages would be federally recognized, bringing the total number to 32. For some perspective, this time last year, that number stood at a mere 15 states.

In short, it was a well-earned night of reflection and celebration, and for Holder, it may have a special significance — he announced his resignation in late September, and although he's still heading up the Justice Department until a successor is approved, his time in the halls of power are winding down. But to hear him tell it, he'll always be able to look back fondly on the country's widening acceptance of LGBT citizens, and his department's role in securing marriage rights for millions of Americans.

I have seen few things in my lifetime more exhilarating, or more profoundly gratifying than this nation's resolute turn away from intolerance and toward acceptance, respect, and equality for our lesbian, gay, bisexual and transgender brothers and sisters. All of us have had a rare opportunity to experience and to shape this great national pivot firsthand. To be present for moments that will endure not only in the equal rights community, but in the history of our country.

Rest assured, he's not wrong about any of that. Whatever anyone's opinion about the last six years of the Obama administration, this much is utterly without historical dispute — we currently live in an America more hospitable to LGBT people and causes than at any other time in history, and the Obama era has coincided with a lightyears-leap forward.

Despite President Obama's 2008 campaign tenor, when he was ostensibly opposed to same-sex marriage, his administration will rightly go down as the most LGBT-friendly in American history. Here are a handful of the achievements:

So, really, is it any surprise that Holder feels that sense of exhilaration and gratification? The truth is, in spite of the challenges still left to overcome for the LGBT movement in America, the last six years have seen a landslide of victories for the community, and that's something everyone involved should take a measure of pride in.

More like this
What The UK Blocking Scotland’s Gender Recognition Bill Means
By Sam Ramsden
Gen Z Are Twice As Likely To Identify As Queer, According To New Data
By Sam Ramsden
The UK Government Is *Finally* Banning Conversion Therapy
By Sophie McEvoy
8 Charities To Donate To During Black History Month
By Alexis Morillo
Get Even More From Bustle — Sign Up For The Newsletter
From hair trends to relationship advice, our daily newsletter has everything you need to sound like a person who’s on TikTok, even if you aren’t.