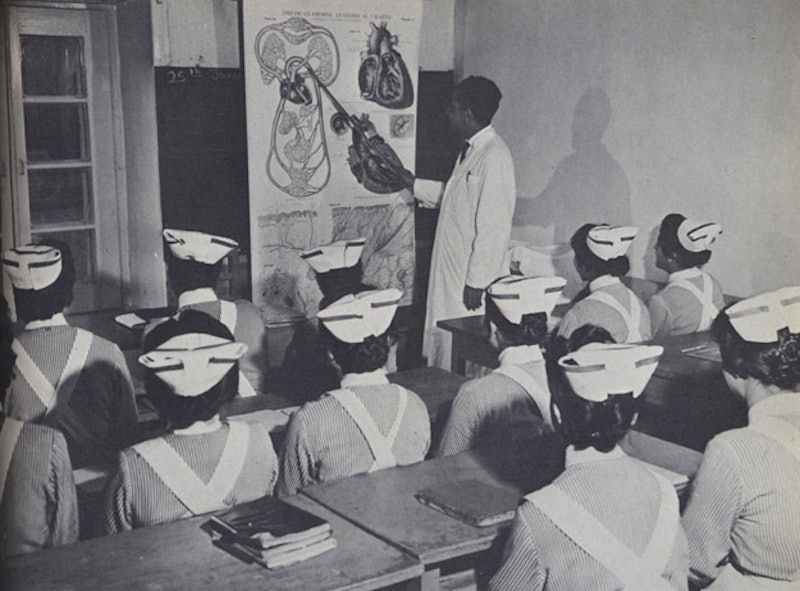 Sex ed is awkward for pretty much everyone. You put a whole bunch of teenagers in a room and make them all talk about sex, and what do you expect, really? Still, we all fight for our right to watch embarrassing videos and shift in our seats every time that one kid makes another inappropriate joke. Because the alternative, where nobody teaches teenagers anything but abstinence, is even worse than having to avoid eye contact with that kid sitting next to you who's kind of cute — but hell if you're going to let on now while there's a diagram of a penis on the slide projector.

Still, no matter how bad sex ed was, it could have been worse — you could have been born 60 years earlier. There's nothing like old school sex ed videos to make you grateful for that condom demonstration on the banana.

The 1950s were a special time when fathers did not react with mortification that their daughters were on their periods and a video needed about seven minutes of build-up before supplying really any useful information. And what on earth is that belt thing?

Well, at least boys in the 1950s didn't have it any easier. I can only imagine how awkward it must have been listening to this "conversation" about wet dreams.

Even those videos, though, somehow manage to give more information about, well, not sex but the topic they're supposed to be teaching. This family planning video from the 1960s, on the other hand, goes on for a very long time about why family planning is important and then gives no information about how to do it. But who hasn't ever wanted Donald Duck teaching them sex ed?

Still, no information is better than misinformation. This 1950s video about "homosexuals" is enough to turn the stomach.

Shudder. I guess the 1960s weren't much better. Someone forgot to tell these video-makers they were living in the age of free love. Instead they chose to tell young people that they need "self control" in all things. Or they will "pay for it." Way to slut-shame, guys.

Then again, maybe horrible sex ed was the only way they could think of to ensure the human race continued after this 1949 movie gave everyone a completely unrealistic idea of dating and nearly doomed us all to extinction.