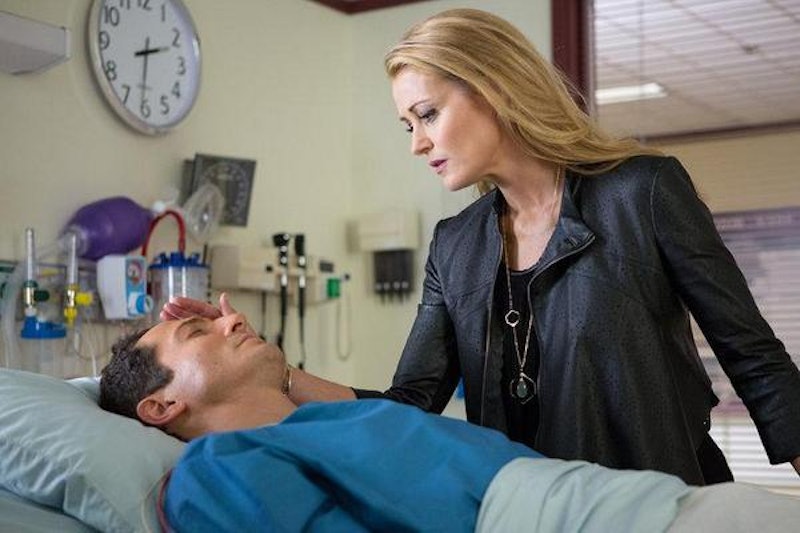 Now wait just one minute. Did Captain Sean Renard really die at the end of the Grimm Season 4 premiere? I'm pretty sure we're all thinking the same thing: that he's definitely not six feet under. The show really wouldn't get rid of the only opportunity for us to enjoy shirtless rage, right? Plus, he's too important of a character and has barely gotten to know his child, so that would just be cruel. Well, I guess we'll have to wait and see, but until then, there's one other element from the premiere that we should be discussing — the mysterious blonde at Renard's bedside. Just as Renard flatlines, she appears like an angel from above. At first, we only see her golden locks from behind, and then her face appears. Who are you?!

First and foremost, it's important to note that Louise Lombard (CSI, NCIS, Star-Crossed) plays the woman who remains nameless — for now. As TV Guide reported in August, Lombard will portray Elizabeth Lascelles, a woman somehow connected to the royal families. Hmm... color me intrigued. For her to show up of out the blue, especially when our beloved Renard dies, she must be important. I have a feeling she's going to play a key part this season (so far, she's scheduled for the first three episodes), and hopefully in Renard's life, especially if it means resurrecting him.

Will she bring Renard back to life? If we know anything about Grimm, and supernatural shows in general, it's that anyone and everyone can return from the dead. Maybe she's a fellow Hexenbiest who can create magical potions capable of bringing people back to life? Well, actually, judging from the promo below, she is indeed a Hexenbiest who can transform herself into an Adalind lookalike. Uh oh, we have another Hexenbiest on our hands! But, is she good, is she bad, and how is she connected to the royals and Renard? Whatever the case, Elizabeth better be a breath of fresh air, because this group has enough trouble on their hands.

With that said, it's time to play the speculation game and figure out the real identity of Elizabeth. Here are my five theories as to who Lombard might be playing.

Are You My Mother?

We've yet to meet Renard's mother, who we know to be a Hexenbiest (meaning Renard was a child of the royal family). As noted earlier, Elizabeth is connected to the royal families and is a Hexenbiest, aka she could have easily slept with Renard's father. There's a very good chance Elizabeth is mommy dearest. Wouldn't that make things interesting? I have a feeling Mama Renard won't be happy with the treatment (and death) of her son and will get her revenge. There is one issue: she looks to be about Renard's age. Well, that's nothing magic can't fix, right?

Could Renard have a sister? We've already met his half-brother, Eric, who is supposedly deceased — we've yet to see a body, so I'm not convinced, which is a discussion for another time. Moving on. These characters, including Renard, have all kinds of secrets, so maybe he was hiding another sibling? Or, maybe he didn't know he had a sister! If he's really dead and never got to meet his sister, that's just sad.

For the past three seasons, Renard's worn a gold ring on his ring finger. It is it a wedding ring? Was he married? Is there a Mrs. Renard running around? I need answers! Maybe Lombard will finally tell us what mysterious piece of gold jewelry is all about.

As mentioned earlier, Elizabeth is connected to the royals. So maybe during that time Adalind was getting busy with Renard's brother in Vienna, she made friends with Elizabeth. Now, Elizabeth has come to Portland to help Adalind get her baby back and cause trouble on behalf of Adalind. Per the promo, it seems like she might be more Adalind's enemy, but you never know! The two could even be related somehow.

Is there a new big bad in Portland? Now that Adalind is trapped in Vienna thanks to Viktor, Nick, Hank, Monroe, Juliette, Rosalee, Trubel, and Wu need some new villain terrorizing them, right? Since Elizabeth does have a royal connection, maybe Viktor sent her on his behalf for a new evil plan or to keep an eye on the Grimm or to make sure Renard stays dead. If this is true, they better bring their A game.