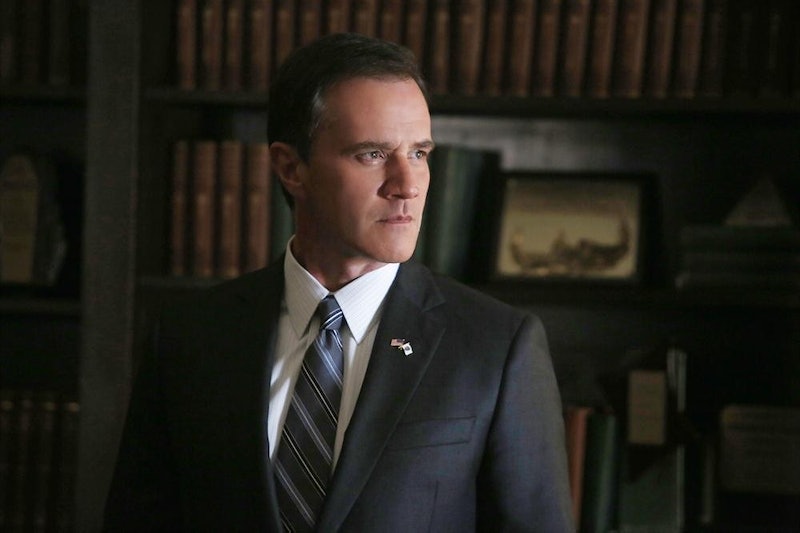 When it was announced that Marvel was debuting the Avengers: Age of Ultron trailer during this Tuesday's episode of Agents of S.H.I.E.L.D. , I was ecstatic. Finally, a reason for my friends who are Marvel fans but quit the show last year to tune in. Then the dang trailer was leaked and Marvel had to release the official version. As the Marvel Twitter so aptly put it, dammit Hydra! Luckily, they're making up for it by releasing some Age of Ultron footage. Phew. I've had that spooky Pinocchio song stuck in my head all week. Maybe this footage will be less dark. Maybe we can woo the nonbelievers after all. If they do check out the show on Tuesday night, they'll be in for a doozy. This week, S.H.I.E.L.D. will introduce Christian Ward, Grant's ruthless brother.

According to the official ABC press release, "the world turns against S.H.I.E.L.D. when Hydra impersonates them to attack The United Nations, and an unexpected enemy leads the charge to bring about their downfall." That's a smart move for Hydra. Impersonating S.H.I.E.L.D. worked once before. How very meta of them. But who is this unexpected enemy? My guess is that it's Senator Christian Ward, who will be played by White Collar's Tim Dekay. Why would Christian have it out for our Agents? Is his brother still in contact with his well-respected Massachusetts family? Let's refresh everything we know about Grant Ward's big bad older brother before his debut.

As we see here in the original promo, the elected official calls S.H.I.E.L.D. a terrorist organization. This may be unexpected because he knows his brother is one of them. Right? Was S.H.I.E.L.D. anything like the CIA before this all went down? It's hard to keep track of the secrets. I wonder if Christian got the memo that Grant was working for Hydra. Something tells me he did not. This is significant because it raises the stakes on Coulson's deal with the military. How will S.H.I.E.L.D. be able to operate if the entire government, nay the world, views them as terrorists?

According to the former Agent Ward, when they were kids, Christian tortured him. He forced him to beat up their youngest brother. Their parents were even worse and Grant is no longer in contact with his brothers or his sister. While under the control of an Asgardian Staff, Ward flashed back to a time when Christian threw that younger brother down a well and tried to prevent Grant from rescuing him. How lovely that this bully ended up in the Senate. Are we surprised? Skye was, but I'm not. Maybe I've been watching too much Scandal.

When Grant was a teenager, he ran away from military academy and set fire to his house. What he didn't know (again, according to him) was that Christian was still inside. Christian pushed for him to be tried as an adult for attempted murder, something Garrett revealed to the boy when he was recruiting him for Hydra in juvenile detention. It's possible that Senator Ward is still seeking revenge for this boyish act of rebellion. Yikes.

You better decide how you feel about secret Hydra agent Ward now, because he's definitely going to be in big trouble during this week's S.H.I.E.L.D.