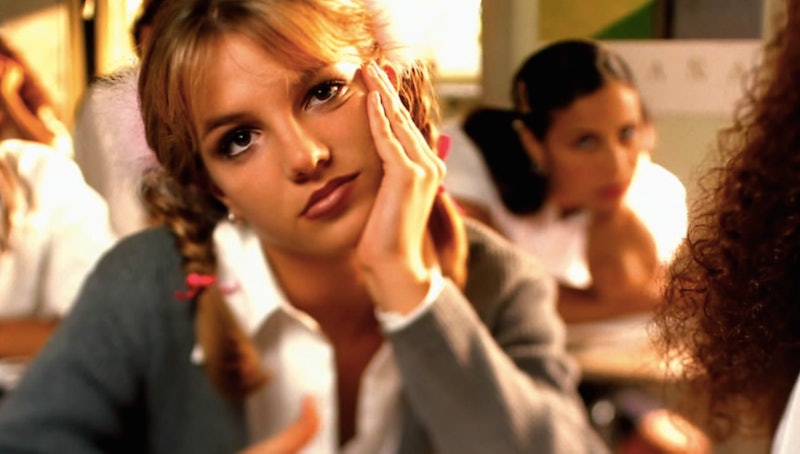 I spent 12 years attending a Catholic school, which, according to conventional stereotypes, means that I am probably one of four things:

Sound a little ridiculous? That's because it is. The average Catholic school is nothing like the extreme representations portrayed by the media. In reality, it's much more boring. Allow me to clear up a few misconceptions:

Britney Was Violating About A Million Dress Codes

Britney, you mah girl, but you made it really tough for me to date in high school. Or maybe that was my acne? Regardless, our uniforms were not nearly this sexy. In our boxy polo shirts that would never quite tuck in properly and ill-fitting dark pants (but apparently plum wasn't a dark enough color, was it Mrs. Hatfield?), we basically looked like amorphous blobs. Amorphous blobs don't have sexual desires, right? Anyway, even if we had been able to pull off Britney's "Baby, One More Time" outfit, we wouldn't have been allowed to wear it. So there's that.

We partied as much as any non-Catholic high schoolers

Yes, partying happened. We also snuck out, drank alcohol, peed in laundry baskets, played beer pong, smoked all the weed cigarettes, hooked up in dark closets, and had all sorts of good old-fashioned debauchery. Now, we might not have been as wild and crazy as the kids in any Judd Apatow teen movie, but we suffered hangovers just like public school kids, and yes, the laundry basket story is completely true.

We weren't told much about sex

Sure, we learned the basics in health class, like where babies come from (God) and what happens if you even accidentally thought about a penis (eternal damnation), but the rest remained foggy territory. The statistics on teen pregnancy being as astounding as they are, it continues to baffle me why our schools thought it was a good idea to not tell horny teenagers where to put what or how to prevent unwanted diseases like HIV, chlamydia, or having a child. Having to figure it out on your own can be confusing and awkward, and not knowing what a condom looks like before you're 20 is just sad.

Rulers were used for measuring, not for hand-smacking

I can count on one finger the number of nuns who were teachers at my high school: One. One nun. She was the nicest, coolest lady ever, and I'm not just saying that because I got an A in her class. Most of my teachers were just regular people who chose to work at a Catholic school and make significantly less money than their public school counterparts for some reason. Oh, right, good values and shit. Those too.

Nope, Gossip Girl is not an accurate portrayal of a typical private, Catholic high school. Neither is Gilmore Girls. Neither is The Princess Diaries. (Seriously, Princess Diaries, my university wasn't as luxurious as your so-called "high school".) Private and Catholic schools may both have uniforms, but the similarities pretty much end there. Being classified as a "private school" simply means that you do not receive government funding; it doesn't necessarily mean that you drive a gold Lexus and have a 7-digit trust fund. In fact, my school was way crappier than the local public schools. We had outdated technology, crumbling bleachers, and lockers that didn't lock. It is unfathomable to me that schools are handing out laptops like candy now. Can I go back to 10th grade again?

For the most part, my upbringing and education probably wasn't that different from yours, save for a few minor exceptions. We ate crappy mystery meat, attended prom, slept through boring lectures, and copied homework 10 minutes before it was due, just like everyone else.

More like this
Why You're Seeing Green Bandanas At Abortion Rights Protests
By Lexi Inks
How To Come Out Online, According To Trevi Moran
By Melanie Mignucci
American Girl Doll Memes Are Going Viral On Instagram & Tiktok
By Emma Carey
You Might Want To Rewatch 'Elvis' For This Britney Spears Easter Egg
By Grace Wehniainen
Get Even More From Bustle — Sign Up For The Newsletter